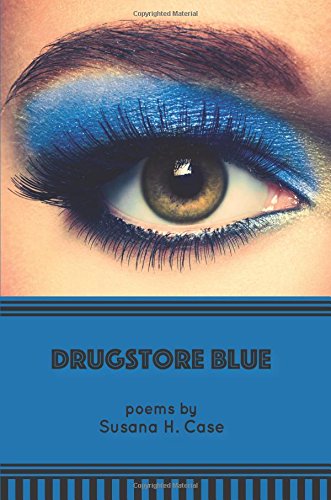 Milo also found Case's Manual of Practical Sexual Advice (Kattywampus Press, 2012) and The Scottish Cafe (Slapering Hol Press, 2002).  Today's book of poetry has read and enjoyed all of these Case titles.  Drugstore Blue is the best yet.

Susana H. Case has a beautiful swagger.  In our misogynist world we expect it from certain types of men but we haven't come far enough that this kind of swagger doesn't stand out.  And it's not like male; I'm bigger, better, stronger swagger - it's more of a "I'm smart and I've come out to play" swagger.  An entirely different beast.

In the street, I find an acoustic guitar,
no name on it, so I decide it's mine
and learn some chords from
a pretty boy ten year younger
whom I retrieve from a SoHo party.

He plays in a garage band. He likes
my long, ironed-straight hair, how I
remove my clothes, their erratic cuts,
easy to toss on to a chair. For a week
we don't leave the apartment.
He makes no plans to go home, but home
is Sweden, so that's understandable.
I strum and roam through rooms,
feeling like a folk goddess.
"I'm leaving on a jet plane," I sing.

You ever spend a whole week naked, talking
about nothing but folk rock? But then
we run out of food and being with him begins
to seem like shoplifting.  You ever do that,
take what you want just to see how it feels?

Susana H. Case is all about empowerment in Drugstore Blue and it is a book I want my sisters and my wife to read.  Case isn't asking for anything, bless her cotton socks, she's telling us the new home base like she were the umpire of common sense.

Today's book of poetry enjoyed these poems in part because they remind me of my very favourite women, my wife K, and my sisters, the estimable Luba S, Donna (reigning Queen of The Nasty Grrls) and so on.  None of them are full time poets but they are all this sort of smart, this sort of strong.

I hate when poets are referred to as brave, they are writing poetry not charging the front lines into machine-gun fire and grenades.  But Today's book of poetry sure does have a lot of time for Case and her enthusiastic embrace of a strong woman's mantra.  Only the strong poets are this carnal without sounding licentious.  Case makes a strong case for passion.

Jeanne Moreau, I Love You

In the film, Jeanne Moreau has two lovers,
a rich one on his polo horse and a poor
archaeologist, connoisseur of good bones.
The husband in Dijon is unbearable
in his sarcastic neglect of her.
How can anyone resist her pouty lips,
dismissed by camermen as not photogenic--
I want to kiss those lips.

I remember, sadly, in an interview, she announced
that sex as an older woman was undignified.
But, in the film she's young, and her existence
as domestic furniture deviates
in unexpected ways: One night of making love

and there she goes with the new lover, in his Citroen,
away into the sunrise, into a revised life,
escaping the death so resident in her old one.
And sex is a little death, sure,
but escape from death too,
done here to the music of Brahms.
Besides, her archaeologist makes her laugh.

I don't want to see her die for not one,
but two indiscretions, this being 1958.
What courage she has driving away
from the Lake of Indifference to Terra Incognita,
as the map drawn at the beginning
of the movie lays out the land of love!
Not even one time does she look back.

When Case goes all dark the lights in the room go out as well.  Case gets you to surrender all your defenses with reason and then she starts swinging her emotional battle-axe and takes no prisoners.

Case is a many sided die, but each side is clearly demarcated.  Drugstore Blue is a velvet hammer.

She's worried; Louis B. Mayer, studio boss,
doesn't want another flapper,
is dismissive of her flat breasts.
He wants a glamour-puss.

Any girl can be glamorous, she sighs.
All you have to do is stand still
and look stupid.

From breasts, the talk shifts to weapons.
Instead of a torpedo bra,
Hedy and George invent a radio-controlled
guidance system for torpedoes,
an early smart bomb, voluptuous and busty.

The Pentagon bosses are as dismissive
of their invention as Louis is of her breasts,
can't grasp a player piano in a torpedo,
refuse to believe
this beautiful woman so nude and orgasmic
running through the woods in the film, Ecstasy,
so glamour-puss,
could also be smart.

ABOUT THE AUTHOR
Susana H. Case is the author of five books of poetry, most recently, Drugstore Blue, new in 2017 from Five Oaks Press, and 4 Rms w Vu from Mayapple Press, as well as four chapbooks. One of her collections, The Scottish Café, from Slapering Hol Press, was re-released in a dual-language English-Polish version, Kawiarnia Szkocka by Opole University Press in Poland. Her poems appear widely in magazines and anthologies. Recent poems can be found in: The Cortland Review, Fourteen Hills, Portland Review, Potomac Review, and Rattle, among others. Dr. Case is a Professor and Program Coordinator at the New York Institute of Technology in New York City.

BLURBS
“In Drugstore Blue, Susana H. Case’s speaker is a femme fatale in serious eyeshadow: ‘You need me / like a tongue needs a second / mouth.’ That’s the sound of her craft, one of her dart-like declarations, hitting its mark. Rarely has makeup, and the color blue, in particular, come alive on the page like this: ‘Blue all the way to the brow, an eyelid / tin-glazed, / underglazed, / sancai lead glazed, / oxide blue glazed, / a glaze of blue not born of the blues, but the antidote, / spring blue, felice blue, / green dragon constellation blue, / occult knowledge blue, / the eye of God.’ Need I say more? Her poetry reads like a graphic novel, a romp, a road-trip in a borrowed car, speeding with a wild child at the wheel. Vivid, direct, episodic, and utterly believable, Case’s tropes make excellent landings. From Morandi to Velvet Elvis, from Marrakech to Cartagena, eros is never far off, and her text glitters on the page in a poetry of great precision.”
— Elaine Sexton, author of Causeway and Prospect/Refuge
“Susana H. Case’s Drugstore Blue offers the edgy yet compassionate and sometimes racy odyssey of a woman coming of age. The poems, wonderfully complex both in their craft as well as their emotional depth, often widen into larger mythological and historical realms. Case’s fine ear and wit are deeply satisfying.”
— Sally Bliumis-Dunn, author of Second Skin and Echolocation

“Susana H. Case dedicates Drugstore Blue to her maternal grandmother who, ‘In her youth, having never seen a ship… considered crossing an ocean and thought, Yes, I can do that.’ Case clearly inherited her grandmother’s courage and curiosity. The speaker in these poems explores terrain both internal and external—from callow youth to vibrant maturity, from Bushwick to Zimbabwe. More seeker than tourist, she keeps her eyes wide open and invites her reader along for the adventure, forcing us to see what goes on in the world we inhabit, even if it does ‘cause inconveniences, / like thinking.’”
— Grace Bauer, author of The Women at the Well and MEAN/TIME