Today's book of poetry will have a slightly different format today.  The six small micro-chapbooks that were sent to us by the Origami Poems Project are too short to be considered for individual attention on this blog.  But collectively they pack a punch.

These are small, fit in the palm of your hand books, only a few pages long, but there is nothing slight about them.  Today's book of poetry was thoroughly smitten and entertained.  We passed these perfect little gems around the office like bon-bons.
T 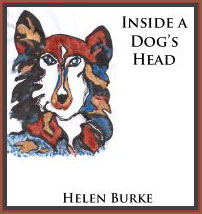 Inside a Dogs Head (for Wendy and Pixie)

There are three words
Inside a dogs head.  Walk ..Friend and ..Sausages.

Throughout the day when they are not
Devising a better philosophy for the world
These words run in tandem up and down
The field and in and out of the woods.
By the stream when they stop and give you that quizzical look
They are unlearning all that jeopardises and intimidates Happiness.

A dog always hopes that we will see sense and undo
All the harm we somehow inflict upon each other.
They explain the word friend while chasing their tails
Or running for a stick.

But even while they spell it out
We walk back to the car ..not seeing autumn under our feet
In need of scrunching. Not seeing the trees so fearful
Of the white world that soon hangs on the branches.

But inside a dogs head - there will always be another Spring.
Sausages for tea. And. Another friend to make.
Another walk to take - down to the silver stream.

Helen Burke really does inhabit a dog's life Inside a Dog's Head.  But there is no barking.  These poems will simply make you look at your dog a little differently, look at every dog differently.

I've never danced with a dog but Helen gets it exactly right, if you are, ever, going to dance with a dog - it's Johnny Cash or Petula Clarke. 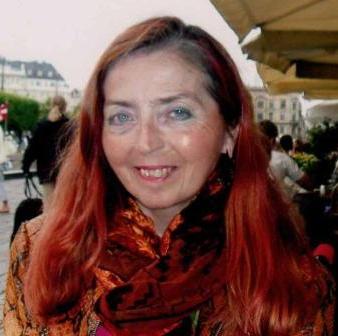 ABOUT THE AUTHOR
Helen Burke has been writing poetry for the last twenty-five years. She has just completed a one woman show at the Edinburgh Festival. Over the last two years she has been a regular reader at Literature Festivals and events in the U.K. – and her work has appeared in numerous poetry magazines and anthologies.
She has also had short stories published, written for and performed on radio as well as working as a visual artist. Winner of the Manchester, Devon and Dorset, Norwich, Suffolk and Leslie Richardson (Yorkshire) Prizes, amongst other awards. Ian McMillan has said of her work – “This is a poet with verve, wit and humanity.”
Her collections include: Poetry – Helen Burke (1997), Island of Dreams (1997), Gift (2001), and Zuzu's Petals (2009). Her newest collection, The Ruby Slippers, is available from amazon.co.uk
Listen to Helen's radio broadcasts on ELFM (East Leeds UK). 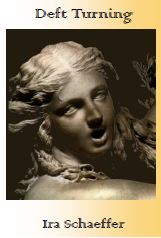 Mother Mayhem, Queen of Hearts
remember how you bound
your pal, your son
tighter than the Gordian knot
with welts and kisses -- your embrace
a coil of vipers, a tickling hysteria.

When your cruelty was spent
you'd lure me back
with baking pans and pineapple slices,
framing your eyes like golden spectacles
then holding them up to mine -- I saw
the one I loved return.

The Jolly Baker laughed, the eggs cracked,
sweet dust powdered your pretty hair,
I watched the mixing blades spin --
without your centrifugal loathing
our topsy-turvy world inverted
as the batter thickened.

Then with quilted mitts
you managed a deft overturning --
my hunger and dread now rested
on a glass pedestal,
a dainty dish sweeter for its rarity --
Mother, you fed me lies;
you fed me love.

Ira Shaeffer's confessional Deft Turning is a slice of relationship world.  That intimate ground between a child and mother and then the child grown.  It is not always chocolate chipped cookies and a kiss before bed.

Shaeffer is working out some cathartic stuff here and it makes for some compelling poems. 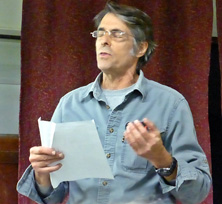 ABOUT THE AUTHOR
Ira Schaeffer,an active member of Ocean State Poets and a proud supporter of the Origami Poems Project, is the current recipient of the Editor’s Choice Loft Chapbook Award. In addition, Ira’s recent poetry has appeared in a variety of publications, including, Penumbra; On the Dark Side: An Anthology of Fairy Tale Poetry; Tastes like Pennies; 50 Haiku; Wising Up Press; and Silver Birch Press In addition, his poem Primavera, was a 2014 nomination by The Origami Poems Project for the Pushcart Prize. 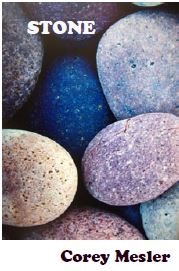 This is a glorious chapbook filled with treats.  William Shakespeare, Virginia Woolf and Iris Murdoch get us going and Mesler fills in the blanks.  This is a stone world and we are welcome in it.

Stone is a major treatise writ small.  But it has weight.

A child will bring a stone home

and keep it as if

it were a precious gem. This

of the world we lose as we age.

On my desk is a desiccated

flower, a gift from

my daughter, the bestowing angel,

and the stone, now here, conferred.

Mesler has a lovely take on the world in these gems. 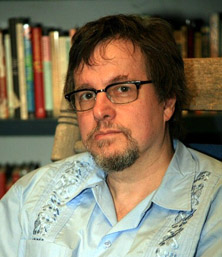 ABOUT THE AUTHOR
Corey Mesler has published in numerous journals and anthologies. He has published 8 novels, 3 full length poetry collections, and 3 books of short stories. He has also published a dozen chapbooks of both poetry and prose. He has been nominated for the Pushcart Prize numerous times, and two of his poems were chosen for Garrison Keillor’s Writer’s Almanac.
With his wife, he runs Burke’s Book Store in Memphis TN, one of the country’s oldest (1875) and best independent bookstores. www.burkesbooks.com
He can be found at www.coreymesler.com. 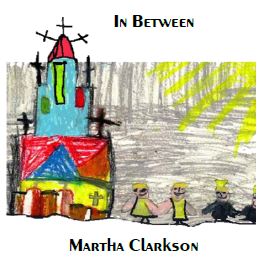 Martha Clarkson has an awful lot of useful stuff to say in this short little chapbook.  She is one of those poets whom I imagine I would get along with famously.  I like the way she thinks.

Red gave the sermon. Blues made up the choir - turquoise, navy, cornflower, and midnight. Silver
was an acolyte who almost set the altar cloth on fire. Brown's the organist. Sky Blue tried out for
choir but didn't make it. Yellow managed the nursery but refused to change diapers. Only one child
was lost that first year. Pink kept the books, noting that donations were down, due to a fading con-
gregation. Purple passed the communion tray. Gold rang the bell. Green mowed the tiny patch of
lawn out front and washed the dishes after fellowship hour. Black presided over the funerals, like you
might expect, and White was the wedding hostess. Orange was the deacon, who, like a ship's purser,
had an unclear role. Somewhere above, God wore Ray Bans, blinded by his own faith.

Martha is a pistol and these poems come at you like they were shot from a little tiny gun - and then BANG.  The reader discovers what a little gun can do. 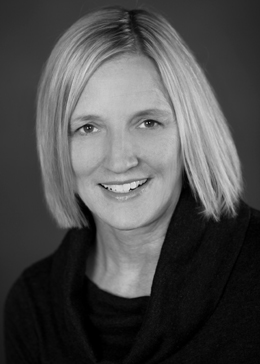 ABOUT THE AUTHOR
Martha Clarkson is a corporate designer and receives mail in Kirkland Washington.
She is a writer of poetry and fiction and is not adept at folding origami but glad to be part of this. Martha won best short story for Anderbo's 2012 contest and has notable mentions in "Best Non-Required Reading" two years in a row. 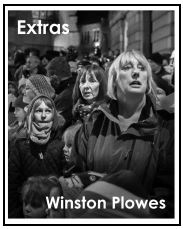 Everything is happening in the closed world of Winston Plowes.  His very short poems pepper this chapbook as though a serious Richard Brautigan had returned to play.

The Range Rover mounted the pavement
Its driver texting Thailand, reversing against the arrows.
His day had gone from bad to worse,
the car park was unexpectedly closed.

Plowes is dead serious and light of heart.  It is an excellent combination. 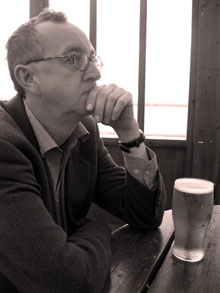 ABOUT THE AUTHOR
Teacher, compere, performer and poet, Winston Plowes spends his days fine-tuning background noise and rescuing discarded words. These are re-sculpted over a glass of wine into magical poetry birds he releases by night to fly to new homes in journals and online destinations worldwide.
He lives in a floating home in Hebden Bridge, West Yorkshire UK, where he tries to persuade his black cat, ‘Fatty’ that it’s a good idea for her to do the same.
Find out more about his work at his website here – www.winstonplowes.co.uk 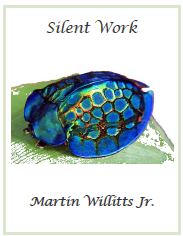 Silent Work by Martin Willitts Jr. is a short treatise on love.  How it works and how it doesn't. Willitts is able to get to the heart of the matter in quick work.  These connected verses work towards a conclusion we can all live with.

The world is a better place with kindness.

Such a simple resolve yet so few of us see it through.

This is the silent work of love. The hard work
is made easy, and the easy work is made hard.

Like after a tornado, there is the aftermath
when everything calms; or,
when distance between towns makes a long journey,
the absence of love can make a relationship
seem forever.

Someone said, we can love all you want,
we can forgive with all our heart, and still,
love might not come to us.
When we believe we have given all we can give,
give more. Give until the silence of love is an overture
and the heart is a swelling of tides.
It is like wind-fall rising and settling. 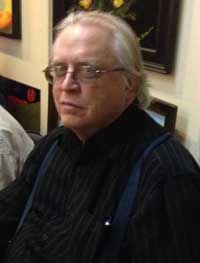 ABOUT THE AUTHOR
Martin Willitts, Jr. retired as a Senior Librarian in upstate New York and currently is a volunteer literacy tutor. He is a visual artist of Victorian and Chinese paper cutouts. Martin was nominated for 5 Pushcart and 3 Best Of The Net awards. He is the editor of Willet Press. (Update: 2014 the OPP nominated Martin's poem, Love is Breathing, for a Pushcart Prize.)

All six of these chapbooks were swell.  Everyone at the office thought so.