Sometimes when I read a poem I just have to slap the book down on the table and shout out "DAMN!" with a big, old Pat Carter exclamation mark.  Once in a while a poem just hits all the amusement buttons I have.  Ruth Roach Pierson peppers Realignment with just such marvels.

With a name like that I could do almost anything
Loose my chastity to three men in one night
Write a new and better poem about a red wheelbarrow
Makes three beds and not sleep in a single one
Play Kris Kringle at the annual Christmas party
Win a hissing contest with my bad-tempered cat
Deliver a treatise on sin to His Holiness
Successfully sue the CEOs of Goldman Sachs
Peel back the layers of an onion without shedding a tear
Become president of the Brotherhood of Inveterate Curmudgeons
Build a chain of dungeons for those guilty of grammatical and
syntactical errors
Solve the case of who killed red robin
Learn the difference between a gong and a bell, a tongue and a clapper

Today's book of poetry has to admit we stumbled once or twice in the thicker passages but Realignment often just wants to see the look of surprise on your face.  Pierson waxes eloquent with a vocabulary that surpasses our current standards by a country mile - but we like to be challenged and we like to learn, Today's book of poetry also likes to be amazed.

Pierson echoes Thomas Wolfe You Can't Go Home Again sentiment again and again, but then like good ol' Tom, like the rest of us, she tries it, again and again.  That's the kind of animals we are. Resolution is a disconnected metaphor that we work and knead until it fits our current desire, fits into the confine of our need.

I have only what I remember, Merwin writes, resigned not to a dearth
but an omnium-gatherum of memories--whether amorphous and
unloosed from time or firmly grounded and undimmed as though
he's again playing, in the re-entered past, the protagonist in the theatre
of life.

From time to time mine ambush me as I walk down the street in full
daylight. Some delight, others devastate, breaking through the frozen
crust to re-inflame buried pain. Still others flit past my inner eye like
short-lived visual migraines. Odd fragments seek me out in dreams,
like last night's. I held a younger

woman in my arms and told her I had paid a terrible price for not
having children, but she, with her two, should go on and fulfill her
ambition. We found ourselves inside a house under renovation. Behind
a demolished wall, a laundry had been discovered that easily could,
we conjectured, be joined

to the kitchen. Outside there were explosions in the night sky, fireworks
in celebration of a Russian holiday, the face of a Czar shattering into
icy glitter. And all the while the woman from next door was setting out,
onto her front porch as on a stage, three bottles of pink-tinted water.

Milo had a few hop, skip and jump moments at this morning's read with some of the German text in Realignment, but wouldn't you know it, Kathryn, our new intern, speaks German.  She lived in Berlin for a year and although she is just telling us that now we are not nearly as surprised by this information as Milo appears to be.  Admiration and translation ensued.

The rest of us each picked a favourite and read in turn.  I was torn between the tender and touching "So" where the young girls are lithe and beautiful, a story "Overheard in All That Jazz Cafe" and "Herat Carpets" where a carpet tells a disjointed story of a marriage that probably never was and a future cut in two -- but I went for "Innocence" because that's the sort of lost Peter Pan I am.

The cabin's screened-in porch
was where we slept, dropping
off only after much
whispering and listening

to the cries of the mountain lion
sounding, in our imaginations,
like a woman being murdered
somewhere deep in the woods.

and gaze out across the river
at the not-yet clear-
cut mountainside illumined by moonlight
or by flashes of sheet lightning
from a distant storm.

But the sound filling those nights
more than any other, the sound
that eased our sleep persuading us
all was as it should be
in the world beyond the porch

was the paused, then deepened
growl of nighttime trucks transporting
peacetime cargo over Snoqualmie Pass
shifting down and down again
with the steepening of the climb.

Today's book of poetry has had a temporary Realignment, I'm still sore in certain places but comforted in the important ones. 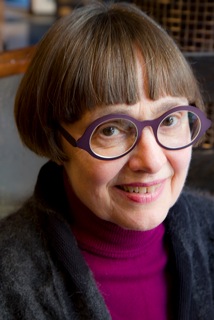 ABOUT THE AUTHOR
Ruth Roach Pierson has published three poetry collections: Where No Window Was, 2002, Aide-Mémoire, which was a Governor General Literary Award for Poetry finalist in 2008, and CONTRARY in 2011. In 2014 Guernica Editions published an anthology of film poems she edited entitled I Found It at the Movies. Aperture, her chapbook of poems written in response to the photography of Josef Sudek, was also released in 2014. Realignment, her fourth poetry collection, was launched by Palimpsest Press in 2015.

BLURB
“For the fortunate reader of Ruth Roach Pierson’s book, her “realignments” are all enlargements – of working vocabulary, as words such as “brindled,” “mazard,” “umbrageous,” and “mephitic” take on new and surprising poetic power; of voice, as Pierson’s muscular syntax reflects the movements of an agile and capacious mind; of experience itself, as her Whitman-like catalogues embrace a dazzling breadth of times, places, and things; and – most especially, for this reader – of spirit, as objects resonate with human meaning through Pierson’s dynamic metaphors. Look and marvel, for instance, at how a simple piano stool in the title poem becomes an image for the winding realignments of felt life, enlarging our grasp on that turning, precarious world through which she guides us so expertly in this superb collection.”
— John Reibetanz

We here at TBOP are technically deficient and rely on our bashful Milo to fix everything.  We received notice from Google that we were using "cookies"
and that for our readers in Europe there had to be notification of the use of those "cookies.  Please be aware that TBOP may employ the use of some "cookies" (whatever they are) and you should take that into consideration.
Posted by Today's book of poetry at 6:45 AM