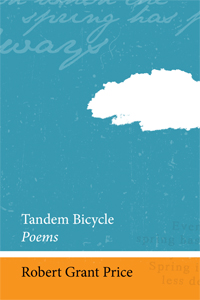 Tandem Bicycle rolled across my doorstep, skidded into a left turn just outside my office and came to a rest, brakes squealing, on top of my cluttered desk.  Robert Grant Price provides quite the entertainment with his highly polished first book of poems.

Tandem Bicycle asks plenty of question about how we live our lives but instead of assuming he has the answers Price has faith enough in the reader to let them draw their own conclusions.

Rolling backwards, the world upside down,
I travel the air, caught in the spotlight,
calling the terror that cuts through me delight.

I am the acrobat on the high trapeze.
My hands, two dusty birds, drag me
above the emptiness, but barely.

A moment longer here and I'll feel the earth.
I hold my breath and hand precariously,
my arms out for the hands that must be coming.

The Acrobat is like many of the poems in this tight package, clean and clear and to the point, with just enough suspense to tittilate the poetry senses.

Price's Tandem Bicycle is lyrical enough to contain the occassional rhymer and hard enough to chip your teeth if aren't careful, he marches with a confident voice over some rough terrain.

When finally the door withdrew its tongue,
no impediment except the road remained

and to run was simply a matter of effort
and dream: we ran so fast our destiny changed.

It became a game. It became chase. Passing posts
to pass the posts, trees flickering by

until, looking back on those coming after,
we discovered who ran faster.

Price is asking some big questions in Tandem Bicycle, he wants us to ponder "why we are here, what is love, what holds us together as a people?"  The invitation is for us to join Price on his bicycle built for two as he pilots us through his narrative of the clockwork of the world.  Emotional and otherwise.

Songs from the Second World War
play inside a coffee shop. Women sing
a sad, low harmony for men
in another world killing each other.
Someone's going to die, the music says.
A man isn't coming home
and if he does he'll be different.
Time apart will make them see
it wasn't love but adrenaline, the sex
of war, the uniform, the heavy chords
of a song that says Goodbye to You. My love.
Romance before a carpet bombing. A song
at a dance. They sing about a love
made of wanting something already dead.

Today's book of poetry felt that Tandem Bicycle was a fresh take, a little less cynical than our usual cup of tea and that warmed our hearts.  Robert Grant Price's debut volume has promise written all over it.

Robert Grant Price was born in Milton, Ontario, in 1976. Previously for Life Rattle Press, Price collected and edited Passing Through: Stories about Places (2015). Price won the E. J. Pratt Poem of the Year award (1999) and the Harold S. Ladoo Book Prize for Writing (1999). Find him @pricerobertg.

We here at TBOP are technically deficient and rely on our bashful Milo to fix everything.  We received notice from Google that we were using "cookies"
and that for our readers in Europe there had to be notification of the use of those "cookies.  Please be aware that TBOP may employ the use of some "cookies" (whatever they are) and you should take that into consideration.
Posted by Today's book of poetry at 5:19 AM