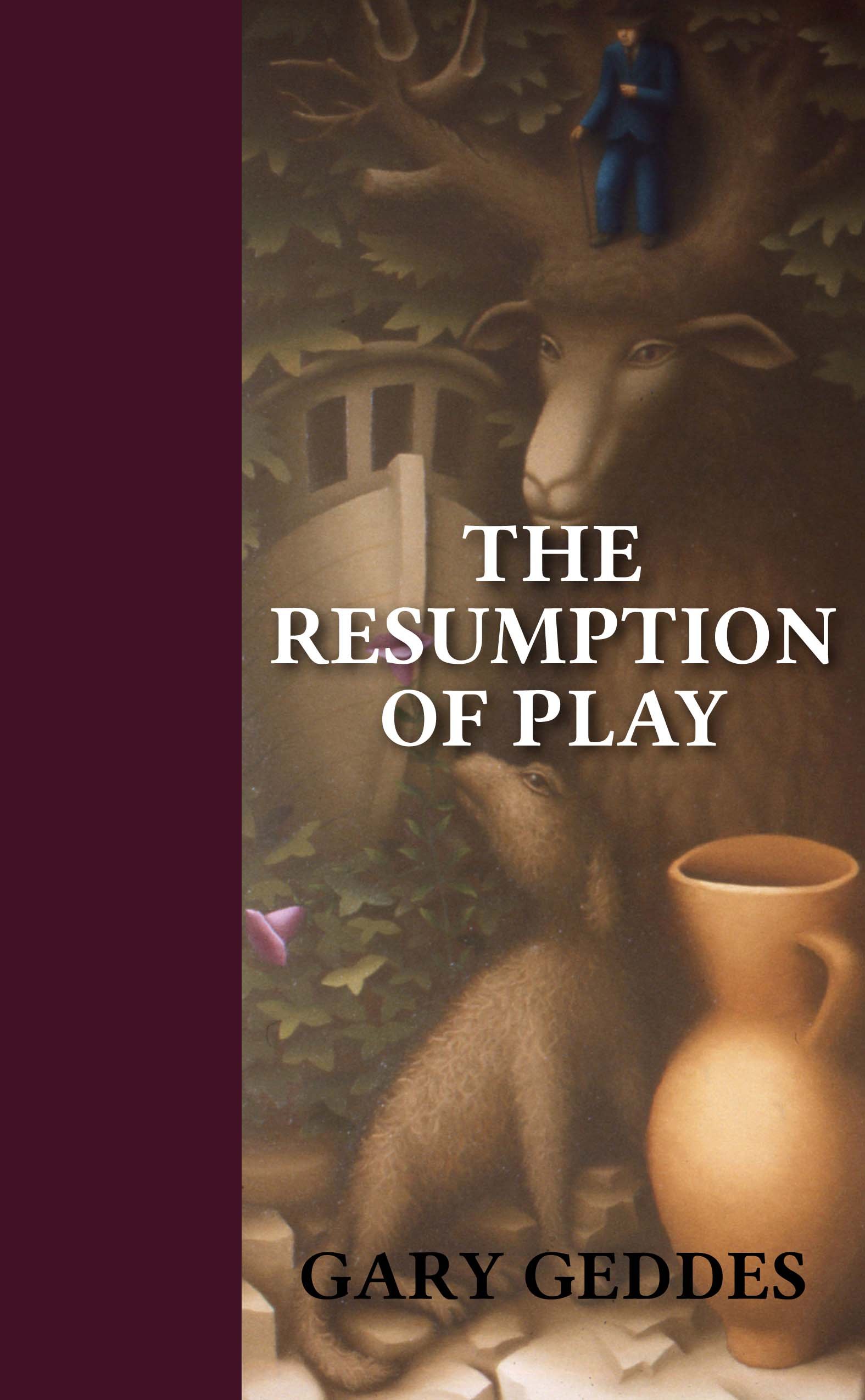 Gary Geddes starts his most recent book of poems with this line from Friedrich Nietzsche,

"We have art in order not to die of the truth."

And then goes on to fill our cup to brimming with nothing but the truth.

Today's book of poetry feels as though we have been conducting a conversation with Gary Geddes since we first moved to Ottawa in the early 80's.  One of my first jobs in Ottawa was working for Saint Rhys of Knott at his Avenue Bookshop.  Avenue Bookshop was in a cluster of fine secondhand bookstores on Bank Street in the Glebe. The Avenue Bookshop specialized in Canadian Literature and it was a gold mine.  It was heaven, and that is where I discovered Gary Geddes.

When I say conversation, I have to confess that it has been entirely one sided.  I've never had the pleasure of meeting Mr. Geddes but I've had ample opportunity to get to know him.  Today's book of poetry send Milo, our head tech, to the stacks this morning and he came back with the following Geddes titles:

It's hardly a complete list but Today's book of poetry isn't finished in that department.

The Resumption of Play joins an esteemed body of work with more of the same clear, clean line that Geddes has almost always embraced.  The Resumption of Play opens with a long poem of the same name and it is a steam-roller, a longer poem, a poem of haunting truths and brutal realities.  Geddes goes inside the horror of residential school experience and no one comes out clean.

In other parts of the world other sorrows echo and the truth seeking Geddes cuts a wide swath.

I told the nuzungu my story, a reporter
I presumed. He wanted all the details
I could remember. Okay, I said. Yes,
there was pain, but that's not the worst

part. Besides these holes in my face
there is a vast hole in the universe
called the future, with no place
for the mutilated. Without my ears

I can still hear. Cutting off my nose
did not affect my sense of smell. Lips,
I discovered soon enough, are not made
to kiss, but to hold food in the mouth

while it's being chewed. A hand clasped
over my face serves two purposes:
enables me to eat and covers the shame.
Unlike the sister seated on my left,

I was not forced to kill my husband
in front of the children or serve as whore-
de-camp. Pregnant, I survived, God
knows why. Perhaps they had orders,

a logic that escaped me. The severed
parts, a bloody pulp thrust in my hands,
disgusted me, but I couldn't bear to toss
them in the bush. Human rights, that

was the phrase the reporter used
before slipping the ballpoint pen in a vest
pocket and closing his blue ring-binder
like a schoolboy anticipating recess.

As he unravelled his legs from the chair
and rose to leave, he asked a final
question, still unable to look at me:
What's needed to stop this carnage,

bring Kony's monsters to the courts?
Ah, justice. A quaint abstraction. Abducted
boys in posh jail cells in The Hague,
clutching a remote control instead of

Geddes hasn't limited his scorn for residential schools and the dignity stripping madness of cultural genocide in Canada.  Geddes has made a life's work of humanism in his poetry, he forces us to come face to face with the abundant injustices and indignities.

The Resumption of Play visits Somalia, there is a brief tribute to Virginia Woolf, a nod to the excellent poet Bronwen Wallace and more.  These poems visit the grave of Ezra Pound and "Tintoretto's version of The Last Supper."

The one thing Geddes poems share in common is they are accessible because in Geddes world it seems clarity and honesty are always the high cards.

What did we know of mythology
out there in the desert? Coyotes,

ravens, trickster figures, how
they take pleasure in havoc,

screw up the best-laid plans,
turn a clear stream blood-red,

and transform a friendly booze-up
into butchery? Scott's monkey

and one small paw clutching his
dog-tag, half obscuring the tattoo

on Scott's chest. What was going on
behind those smooth, pale lids?

and dead, a string of bloody
spittle drying on his lips,

his last words, Canada, Canada,
still hanging in the air.

Our morning read was a little longer than usual.  Kathryn, our Jr. Editor, read the title poem "The Resumption of Play" in its entirety.  The staff rumbled through the other ten Geddes titles strewn about the office table and read from each of them, in sequence.

A Song of Recall

And so it is with longing, you extend a hand
into the mist expecting to take hold of something
lost, perhaps the very thing you'd yearned for

but could not claim, a dream-shape, an unwritten
melody, insistent, that flitted in and out of your days
leaving its residue on your pillow, the faint smear

on an otherwise blank page, a colophon of desire.
You glimpse an apron, blue, with a pale, stitched
hem, a smudge of flour near the generous pocket,

enough to hold for a moment that lost mother
disappearing into the night who might, just might
be yours, wisps of her long dark hair surviving

cancer, surviving the flames, making a mockery
of memory itself, that insatiable canvas needing
to be filled, framed, needing to have occurred.

Today's book of poetry was very pleased when The Resumption of Play arrived at our offices several weeks ago.  We are honoured to have the opportunity to tip our hat in the direction of one of Canada's best poets.  Mr. Geddes has been sharing his fine poems with Canada and the rest of the world for more than five decades and we are happy to tell you that the song DOES remain the same.  The Resumption of Play is as contemporary as tomorrow's news.

Every poetry shelf in Canada should have some Gary Geddes on it. ABOUT THE AUTHOR
Gary Geddes has written and edited more than 45 books of poetry, fiction, drama, non-fiction, criticism, translation and anthologies and won more than a dozen national and international literary awards, including the Commonwealth Poetry Prize (Americas Region), the Lt.-Governor’s Award for Literary Excellence and the Gabriela Mistral Prize from the government of Chile, awarded simultaneously to Octavio Paz, Vaclav Havel, Ernesto Cardenal, Rafael Alberti, and Mario Benedetti.

We here at TBOP are technically deficient and rely on our bashful Milo to fix everything.  We received notice from Google that we were using "cookies"
and that for our readers in Europe there had to be notification of the use of those "cookies.  Please be aware that TBOP may employ the use of some "cookies" (whatever they are) and you should take that into consideration.
Posted by Today's book of poetry at 10:50 AM