Edward (Ed) Sanders is our third favourite Sanders in the world.  Pharoah Sanders will always win that race and Bernie Sanders is an ace example of how the best of us comes to live in one hard working soul.  Third place doesn't sound like much of a prize but Today's book of poetry has long admired Mr. Edward Sanders, the poet.

Edward Sanders wears a lot of hats.  You've probably heard of his culture crashing musical group The Fugs.  Sanders opened the famous Peace Eye Bookstore in New York, and was on the ground in San Francisco when Beat met Hippie.  His bibliography is longer than my arm.

So I was disappointed when Milo came back from the stacks with only one Edward Sanders collection.  Today's book of poetry has a first printing of Sanders first publication, Poem From Jail (A City Lights Publication, 1963), but that was it.  Milo, our head tech and book scout, has been tasked with filling in those huge Sanders gaps in our library.

Today's book of poetry thinks we should all agree that pound for pound, there may be no more famous town on earth.  New Orleans is a town that has inflamed the imaginations and compelled discovery for generations.  From a swamp-stop-tent-town to a modern metropolis.  And into that Sanders brings William Blake for a look around, has Mark Twain twang and Lee Harvey take a stroll, mourns the loss of a beloved Magnolia tree, hates FEMA and sings wildly into the chorus we all know, songs for the everyman.

Could it be that Huey was a savior?

She was sick of the generations of
post-slaver whites who always had one tune to sing:

"Don't give those black folk, not a dime
That will come another time"

Ask the Gracchi of ancient Rome

But the slavers really hated Huey
They snarled he was a pawn of Marx
but Marie Lebarge was totally certain
that Huey Long's slogan "Share Our Wealth"
came from the sermons of Jesus
and Jefferson's love of revolution.

Poems for New Orleans offers up some alternative views as to what the true history of the magic town could be.  Sanders is willing to imagine a different and a better future for New Orleans but sometimes he needs fantasy to do it.

Edward Sanders has a honed, hair-trigger sense of humour, a sense of duty in honouring history, and a bigger sense of responsibility than most about the hubris of those responsible for the human tragedy during and after Katrina.  That's a lot to put into one book of poems and Sanders knows it.  But clearly Sanders has paid the price of admission, spent double-time on his homework.

Today's book of poetry was never quite able to figure out the lyrics to the Tragically Hip song "New Orleans is Sinking" but I thought we should play it on the morning rotation along with Don McLean's "American Pie."  McLean knew about the levies and more.  Arlo Guthrie sang about "The City of New Orleans" so he had to be included as well.

Then we thought Dixieland, then Zydeco, then all hell broke loose.  Kathryn, our Jr. Editor, and Maggie, our new intern, were both dancing with Milo.  Max opened his office door and a blue wall of what looked like a heavy fog rolled out behind him, he waltzed over to the gyrating threesome and put down some John Travolta moves that jaw-dropped the room.  Then, he spun around, returned to his office murmuring something about emptying the swamps, history of evil, alligators not being the worst beast that slithered, and his door shut with a blue wisp halo around the edges of his office door.

Edward Sanders studied Greek in university and isn't shy about bringing in some of the Greek gods to stir things up, Greek historians too.  Sanders knows that New Orleans is bigger than any one tragedy, it has endured a million sorrows and if the soil had memory it would be weeping blood.  Yet Poems for New Orleans remains a celebratory incantation to the future to remember; and it is a bit of a prayer.  As Heraclitus said: "No man ever steps in the same river twice, for it's not the same river and he's not the same man."

O my God!
one of my neighbors was floating with
her hair entangled in a tree limb

to help me home.

That's what my mother always said:
The rivers always pours toward poverty
You can't lose the same house twice

but once you get to heaven
the water makes God's bread to leaven.

Our morning read here at Today's book of poetry was tempered by my poor sleep last night.  Today's book of poetry's biggest fan and supporter is in Montreal for a few days and the place feels empty without her.  But the crew gave Poems for New Orleans a good rally around the flag and that cheered me immensely.  Sanders encouraged a vibrant reading with his splendid narratives and tender heart.

Today's book of poetry would be remiss if we didn't extend an extreme bow to Edward Sanders along with a "Thank You Sir" in the robust and genuine style of one of Rob McLennan.  Sanders has been on the poetry beat for a long, long time and his poetry still feels fresh, immediate and necessary.

They took a picture of Gandhi's personal possessions
at the time of his killing
a pair of glasses, a robe, sandals
& maybe a water jar

but I can't help it—
I miss my ironing board

Edward Sanders has been publishing his brand of anarchy and beauty to appreciative audiences for over half a century.  It hasn't gotten old yet.

Today's book of poetry is proud to introduce Sanders to some of you younger readers.  For any of you old enough to remember "I Love Lucy" Sanders will be a poet you know like an old friend you can depend on.  Edward Sanders was present back in the day, he remains a vibrant people's poet, a necessary voice. 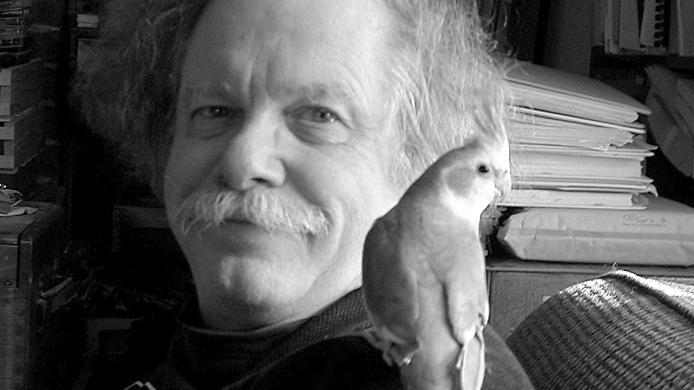 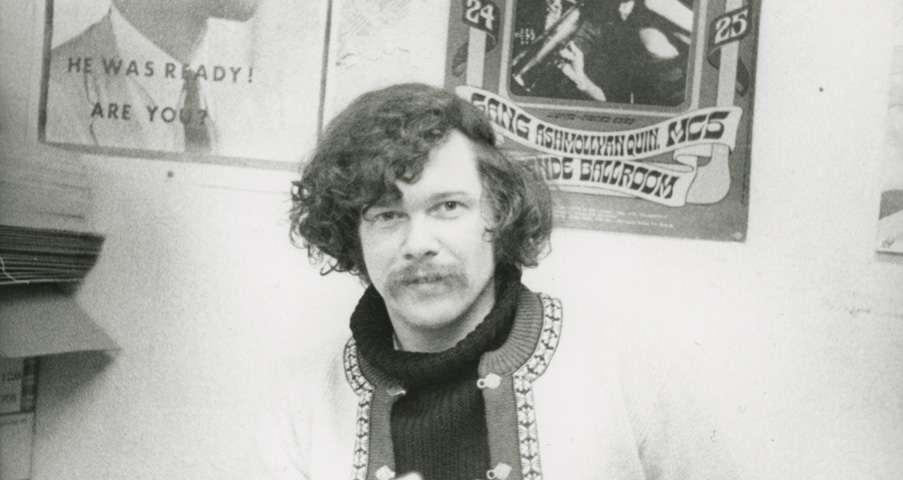 Edward Sanders
Back in the day.

ABOUT THE AUTHOR
Edward Sanders was a founding member of the seminal bohemian rock band The Fugs and a prominent figure in the 60s counterculture. He is the author of numerous books of poetry, fiction, and nonfiction, including the bestselling study of Charles Manson, The Family. The winner of a number of writing awards, including a Guggenheim and an NEA fellowship, he lives in Woodstock, NY.

BLURBS
"Ed Sanders—poet, Pentagon levitator, classics scholar, founding member of the Fugs—is a political force in Woodstock, New York."—Hendrik Hertzberg, The New Yorker“No poet today writes history better than Ed Sanders. From the Duke of Orleans’ fragile grouping of houses in 1718, to wealth and heights with Mardi Gras and fun without guilt, to the storm of Katrina, the bard of our continent gives us the truth with these poems and songs.”—Joanne Kyger, author of About Now: Collected Poems“Sanders the poet-maestro of American history excels his own lyrical genius with the truth beams he sends flashing in Poems for New Orleans.”—Michael McClure, author of Scratching the Beat Surface“A magisterial suite of poems tracing the Crescent City from its founding in 1718 through the ravages of Hurricane Katrina, Poems for New Orleans is a vertical history in verse, recalling Charles Olson’s Gloucester and William Carlos Williams’s Paterson."—Nina Shengold, Chronogram Magazine“The bad handling of Hurricane Katrina is a central point of this book, but more importantly, Sanders also sheds light on the after-effects and the suffering it imposed on those who were displaced. This type of ‘investigative poetics’ is not new territory for Sanders… [H]e has put his best foot forward to cover one of America’s greatest tragedies. The book is interspersed with sharp, quick-witted shorter works that glue the larger poems into a taught fabric; the shorter poems represent an alternate poetic frequency and outlook that allows the larger, more musical poems to mesh exceptionally well.… Poems for New Orleans provides a much-deserved helping of poetic justice.”—Darrin Daniel, Rain Taxi“Ed Sanders, in his Poems for New Orleans, leads us at one point to imagine the goddess Athena reappearing to intercede for yet another place where ‘something has shamed justice.’ The work is, as he says, ‘a prayer for the victims’ of this injustice. But it is also a Prophetic Book, an eloquent cry of righteous indignation. And it is an Apologia for the Polis, a celebration of the Queen City, the Fertile Crescent, with its richness of culture, history and humanity. In producing this extraordinary work, Sanders has combined the patient labors of the engaged historian with the creative inspiration of the poet.  The Poems enlighten the reader about the thick particularities of real, lived history, especially through the narrative ribbon of the deeply moving Lebage family history that runs through the work. At the same time, they enchant the reader with the magic of the place, so that one can well imagine the visionary Blake crossing paths with the Voodoo Priestess Marie Laveau. Sanders brings to the scene of the crime and the dramatic landscape diverse skills, ranging from those of an Investigative Poet to those of a Rhapsodic Historian.  The Poems reveal that he has gained a deep and empathetic knowledge of the city's history, its people, and its complex personality, that he has intently ‘listened to the whispering of its secret mind.’ ”—John P. Clark, Gregory F. Curtin Distinguished Professor in Humane Letters and the Professions at Loyola University New Orleans

Poems cited here are assumed to be under copyright by the poet and/or publisher.  They are shown here for publicity and review purposes.  For any other kind of re-use of these poems, please contact the listed publishers for permission.
We here at TBOP are technically deficient and rely on our bashful Milo to fix everything.  We received notice from Google that we were using "cookies"
and that for our readers in Europe there had to be notification of the use of those "cookies.  Please be aware that TBOP may employ the use of some "cookies" (whatever they are) and you should take that into consideration
Posted by Today's book of poetry at 10:26 AM