Goodnight David McFadden, good luck to the rest of us

Today's book of poetry:
Goodnight David McFadden, good luck to the rest of us. 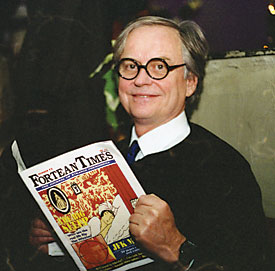 Today's book of poetry has been on the road for a couple of days.  We travelled to Cobourg where our old friend Stuart Ross hosted us for an evening.  If you want to know what paradise is going to be like, spend an evening with Stuart and his partner in crime Laurie.

On Saturday, I joined Stuart and Laurie and a rather large crowd at St. Anne's Church in Toronto to say Goodbye to David McFadden.  Say goodbye we did.  The Reverend Maggie Helwig, a very fine poet, saw me sitting at the back of the church and joined me, as old friends do.  It was Maggie who told me that the entire interior of St. Anne's, all of the panels, were painted by members of the Group of Seven.

At first I thought Maggie was making a religious reference I was too slow to pick up on, but as she continued a light shone down and slapped me in the side of the head.  I spent considerable time staring at the ceilings and walls.  The Group of Seven in a downtown Toronto church where one of Canada's greatest poets was getting a send-off.  Perfect.

Stuart Ross was one of several folk who spoke during the service for David.  There was a small and excellent choir and much singing.  Of course there were tears everywhere, Hazel Millar was sitting in the row in front of me with other in the Toronto literati, tears abounded.

David McFadden dying was certainly sad.  His funeral service was full of respect and admiration and faith.  His friends and family made sure his final Dilbert moments in public were full of humour and love.

In transit to and from Cobourg and Toronto and then back to Ottawa, Today's book of poetry visited three libraries, looking for their "for sale" shelves or rooms, and three secondhand bookstores.  One of the bookstores, in Oshawa, was going out of business, in fact, it was the last day the store was to be open.  I'd been frequenting this store recently because they always had a considerable amount of poetry on the shelf.  Their poetry books are always eight dollars or less, but on the last day they were open, the price on the covers was being reduced by 75%.  Their usual inexpensive pricing had already been reduced during the previous weeks.

Today's book of poetry also discovered The Book Shop in Tamworth, Ontario.  We didn't discover it so much as take the directions Stuart Ross had provided.  The directions were excellent and needed.  I've lived in this part of Ontario for most of my life and had never heard of Tamworth.  But there is was, and so was The Book Shop.  What an oasis.  Robert Wright, the proprietor, couldn't be nicer and he certainly knows his stuff.  I've rarely seen such a big or intelligent poetry section in a secondhand bookstore.  Robert took my stack of post-it note lists of poets I'm looking for and promptly put books in my hand like jewels.

By the time Today's book of poetry had made it back to our offices we had somehow picked up fifty-eight new poetry titles.  A couple of those are deliberate doubles, I always keep a stack of books to give to friends, and a few will be doubles (because my brain is old and stupid) simply because I didn't remember that they were in the stacks.  Today's book of poetry has some reading to do.

Both for your amusement, and my own, I'm going to list what we found.  Today's book of poetry will be back to regular programming a.s.a.p.

This is what we unpacked from our recent trip:

There Is No Falling - Robert Hogg
The Rain in the Trees - W.S. Merwin
Museum of Bone and Water - Nicole Brossard
[Today's book of poetry knew we had these titles, but couldn't pass up the price/opportunity to give a copy on to some unsuspecting friend.]