The poems in Small Sillion come across as beautiful contradiction for pointing out such dark truths.  Joshua McKinney wrestles in the knowing that the glory necessary in the world can be found in one green field, one perfect silver river.

"Sillion" is the earth turned over by a plow.  Fresh rich soil.  And the implication is always fertility, the future possible.  McKinney's poems are a virtual cornucopia of the natural world, hawk to dove.  Ants crawl out the corner of poems and down the side of your desk, onto the floor and then back to the earth from which they came.

Small Sillion is the entertaining flaneur at work.  Joshua McKinney passes out a clean and precise song when he goes digging in the loam.

Returning from a run, I walk
the last block to cool down,
down the fractured sidewalk,
past the abandoned house,
its waist-high weeds and sodden
newspapers, down the street
past the must windows of
my meth-addict neighbor,
the driveway Rorschached by
her new man's monster truck,
down the street beneath jets
dragging exhausted trails across
the sky, under the olive tree
which has bloodied the concrete
obscenely with its fruit.
My daughter kneels in our driveway,
chalking her brother's outline as
he lies on his back, limbs splayed,
grinning. Her shape in yellow pastel
sprawls nearby. As I approach,
she looks up, asks me to lie down.

Joshua McKinney is working on some big ideas, asking, praying, talking with everyone Biblical from Zacchaeus to the Lord.  Today's book of poetry doesn't believe in much ecclesiastic but we can certainly get behind the idea of hope.  Small Sillion is a soldier in that battle, a warrior of gentle weapon, promise and hope in basic goodness.

McKinney takes on death, a reoccurring visitor in the pages of Small Sillion.  McKinney gives the dark giant due respect and isn't afraid, but he certainly is vibrantly observant.

These poems are never a sermon, McKinney speaks with such easy authority the reader is instantly committed, comfortable like home.

When my wife motioned me to the picture window
and pointed to the garden where
our daughter and son sat beneath sunflowers—
the dog and both cats
sprawled around them as they toyed with dolls in the dirt,
a honeyed eastlight washing over it all—
my first thought was to save the scene.
And perhaps because I was tired
of the digital's immediacy, the ease with which
it erased my failures, or perhaps
because the moment demanded more resolution,
I ran to the hall closet and pulled down my old 35 mm
which had no film and then
ran to the kitchen drawer wherein were tossed
all things utile and useless and rummaged
among the screwdrivers and flashlights, the scissors and
tape, the twist ties and rubber bands,
for the film canister I thought I'd seen some weeks before
and sure enough
buried at the back I found it and popped the lid and
poured into my anxious palm two seeds or so I thought
for an instant before recognition claimed them
as dry buttons of blood,
the twisted tissue of the kids' umbilical remnants
my wife had told me not to save (disgusting, she said)
but which I'd kept and hidden
and then forgotten for reasons I don't understand and
then from the window my wife said you missed it
and even as she said this I heard the children arguing outside
and realized I could smell something foul
and that it was what I held in my hand
and that it smelled like what it was,
like flesh gone bad,      like,         like

Our morning read was back indoors as the end of May, here in Ottawa, feels more like late November.  Today's book of poetry had guests from Quebec City this weekend, lovely meals, great conversation and much laughter ensued.

For today's morning read we had to knock on Max's (Senior Editor) door.  Generally we don't like to disturb Max but he is our go-to guy for all things philosophical and religious, even if he is an old crank.  Max grooved on McKinney's big noggin' and grounded vision.  Max said that we all needed the same things: grounding and hope.  Luckily for us Joshua McKinney serves up a feast.

inside the soul
of our own flesh

Today's book of poetry is moving slowly these days.  Got sleep/dream punched by some evil villain and woke up this morning looking like this: 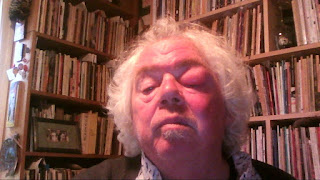 But fear not poetry puppies, Today's book of poetry has plenty of poetry treats on the horizon.  Please stay tuned.

Joshua McKinney's articulate rumbling, hands deep in the verdant earth, his heart soaring in the trees with the birds, never loses sight of us.  McKinney's tender and humane cooking resonates vibrant here at Today's book of poetry.

These are recipes you might want to refer to again, McKinney has the slow burn down tight.

ABOUT THE AUTHOR
Joshua McKinney is the author of three previous books of poetry: Mad Cursive (Wordcraft of Oregon, 2012), The Novice Mourner (Bear Star Press, 2005), and Saunter (University of Georgia, 2002). He is a recipient of the Dorothy Brunsman Poetry Prize, the Dickinson Prize, the Pavement Saw Chapbook Prize, and a Gertrude Stein Award for Innovative Writing. He is coeditor of the online ecopoetry zine, Clade Song, and teaches at California State University Sacramento.

BLURBS
Joshua McKinney is a poet of keenest attunement. In Small Sillion he plows furrows in unattended, taken-for-granted scapes of land and mind to discover the wonder of “something/sacred something wholly/mundane.” This poet’s tensile attention balances at the boundary of language and witness, grappling with the ways that language is incommensurate with experience. McKinney’s poetry nonetheless ventures farther, both sensuous and otherworldly: his is a lyricism “aware as the nerve current sang in its flesh” that tenderly, gracefully pursues fulfillment “without knowing the nature of what it points to.”

Its every line worked into shine by the poet’s meticulous ear, Joshua McKinney’s Small Sillion is devotion enacted: a vow to make the work of words matter, to make words into matter, by attending to the world with acute attention and tender care. Like the singular singing of Gerard Manley Hopkins, these meticulously sculpted poems attempt to render visible the invisible by enfleshing the word with “the phenomenon of pungent sound,” limning the inscapes suggested by encounters with birds and trees and other emissaries of life outside of human language and consciousness. To truly encounter the otherness alive outside us and to write of it, to persist in such endeavors—these are acts whose faith is born of an unusual openness, the poet “aware as the nerve current sang in its flesh.” How quickly the mundane opens out onto otherwise in these loving lyrics that bring “each creature//inside the soul//of our own flesh.”
—Brian Teare

In his luminous fourth collection, Joshua McKinney harvests the threads of his affection to loving fruition. Via poems indebted to the ground—that increasingly denuded and over ploughed place we call the earth--the poet tenderly graphs the region of our ultimate dispossession and somehow makes it feel like home. Both rooted and rootless, and always in the midst of what can be seen or sung, these poems seek “Something joyful, something woeful as the oldest sound. . . .”  Small Sillion is the Book of Psalms for the 21st century.
—Claudia Keelan