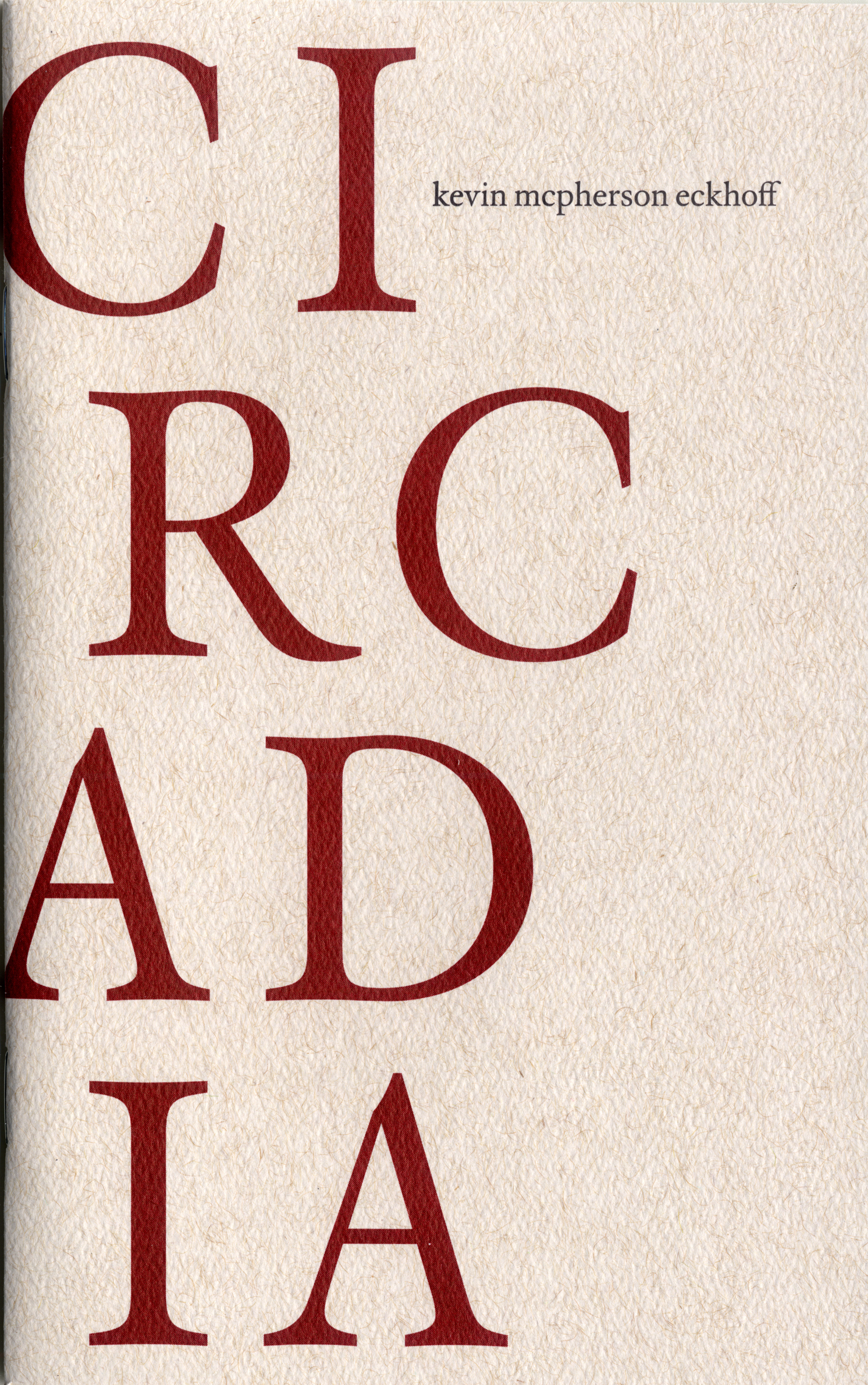 kevin mcpherson eckhoff's CIRCADIA gives us twelve absolutely engaging list poems.  Those of you poetry babies who regularly attend Today's book of poetry will remember our fondness of the form.  eckhoff's poems, each of the twelve is titled for a month of the year, are scatalogical gold.

Before you are finished the all too brief CIRCADIA, you really will not want it to end, eckhoff will have you travel from lemming history and Play-Doh to the Violent Femmes and the male CEO of Mother's Against Drunk Driving. This is deep-sea diving without taking a breath.

If this were a road trip, it would be one of the best; CIRCADIA is poetry rendered into hilarious and somewhat doomed hopscotch.  Not sure if eckhoff would ever take his foot off of the gas, but what a ride.

I ate some cotton candy. I bought a plastic Wonder
Woman cup for a dollar. I lifted some weights. I'm
not in a classroom teaching. I didn't vomit. I picked
up four boxes of books and papers and puppets and
knickknacks that the custodian had cleaned out of
my office at Okanagan College. I ate five peaches. I
asked the president of the board of directors to step
down. I spit my gum out the car window. I brought
home an orphaned baby vole. Kiddo named the baby
vole, which we've since learned may actually be a
pack rat, Diggin' Smily. I ran. We moved the toddler-
sized armchair into the bathroom because my
3-year-old was spending so much of his day on the
potty and the milking stool gets so hard on the butt
after reading five books. I lifted some weights. My
3-year-old asked: "What does God think of John
Lent?" I flipped a table to emphasize a point. I drove
to Vancouver. Playing at the park with my 1-year-old,
the moonrise was a word thief. I ran. There were
many toads on the road. I ate some popcorn. A kid at
the park told me that he is really into parkour and
that he just learnt about it yesterday. I watched a
lawyer cage his tears, in part, because I questioned
his actions and abilities. I petted a capybara. I didn't
go to the lantern festival. I deactivated my Facebook
account. I cried. I texted so much while driving. I
wondered how dreams work. I took three boxes of
books to the bookstore to sell. I spotted a fawn on
the side of the highway nuzzling a large lump of
brown fur.

The twelve monthly missives make for a eventful year, eckhoff is hammering out poems that are consistent, anti-cryptic, clear cut, and clean of artifice.  What more could the poetry angels ask for?

CIRCADIA makes it all simple, a grandfather dies as easily as a snack of warm nuts appears.  A crossword puzzle and Max Ernst's The Hundred Headless Woman appear on the same palette and with the same simple but vivid colours.

Between thought and expression, let us now kiss the culprit.
Ooh, I don't know just what it's all about
VELVET UNDERGROUND, "SOME KINDA LOVE"

I almost had sex. I ran. I didn't wear a seatbelt. I got
shit-eared by Laurel because her favorite foliage in
the front yard, a red twig dogwood, which she kept
calling forsythia, was by her judgement, irreparably
over-pruned by my mother. I played at the park. I
auditioned for the role of James. I Googled "how to
cook frozen steaks." I drank three coffees. I lifted
some weights. I watched my 3-year-old reveal how a
cattail that has survived the winter contains the fluff
of roughly a hundred thousand billion dandelion
seeds. I had a new passport photo taken. I went to
the chiropractor. I went swimming in the public
pool. I cleaned up my 3-year-old's puke from the bed.
I lifted some weights. I bought the hedgehog a
wheel, in which it ran for 90 minutes. I threw up. I
did not lift any weights. I wondered about the word
"hide" --how its noun and verb meanings collide. I
threw rocks into a creek. I lifted some weights. I had
sex. I momentarily fell asleep on the hardwood floor
while my 3-year-old and I hid from Jehovah's
Witnesses who were knocking on our door. I started
watching the second season of Daredevil. I shaved. I
ran. I beat up the cherry tree using a scythe to sap
my anger. I ate a lot of chocolate. My 3-year-old
tossed a shred of toenail into the hash browns
as they were frying. I picked up my new passport.
I didn't buy my mom a birthday gift.

It's almost spring here in Ottawa and we are all anxiously awaiting "open-window-weather", in the meantime we will rely on poetry like kevin mcpherson eckhoff's refreshing CIRCADIA.  There is so much to enjoy in these inventories, catalogues, lists, poems.

I waited in the shadow of my stupid house.
JAMES FRANCO, "THERE IS A LIGHT THAT NEVER GOES OUT"

I rolled down a grassy hill. I went to my first gala film
premiere. I lifted some weights. I only had one
coffee. I sneezed. I killed a mosquito. I cleaned the
vegetable crisper. I saw my best friend. I self-taped
an audition for the role of Shawn in a film called He's
Out There, even though I know I won't get it. I was
hot. I ate some buffalo-wing-flavoured combos. I
swam in Okanagan Lake. I ran. I didn't get a
callback. I thought about Orlando, the city, not the
book. I clipped my fingernails. I saw a fly trapped in
a Ziploc bag at the playground and I didn't let it out.
My parents visited. I read 36 chapbook-length
manuscripts. I tried teaching my 10-month-old how
to gesture "momma" in American Sign Language,
which he could only imitate as "bitch." I lifted some
weights. I lamented not having found Anne Tardos
and her work 10 years ago. I felt like a hammer. I
nabbed a feral kitten out from under a red minivan at
Caravan Farm Theatre and brought it home. I went
swimming at the green boathouse. The kitten went
to live with our friend Cody. I signed up for a
LinkedIn account. I ran. I read about Yuxweluptun's
proposal to rename B.C. I worked out at the Vernon
Boxing Club for the first time.

Today's book of poetry looks out over our big wooden desk and sees the room Michael Hewko built for me.  A quick and simple look at our shelves quickly reveals how poetry beasts like David Clewell, Stuart Ross, Cameron Anstee, David Collins, et al., have showered on our office with generosity.  The poetry world can be like that.  We have much to be thankful for in these offices and it gives Today's book of poetry hope.

In CIRCADIA eckhoff circumnavigates some difficult terrain but with such elan that the lasting impression is one of giddy comfort.  You will have a poetry smile on your face after reading this book, our new intern Tomas guarantees it.

ABOUT THE POET
Kevin McPherson Eckhoff is a writer, an actor, a teacher, a hubbub and a daddoo. The Globe & Mail described his most recent book—their biography (BookThug)—as “wide-ranging” and “incredibly playful.” He plays one of the lead characters in Sean Braune’s feature film Nuptials. By day, he teaches writing and shit at Okanagan College with his very star bff, Jake Kennedy; by night, he lives on unceded Splats’in Territory with a Laurel and two miniscule muscular men.