Proving Nothing To Anyone - Matt Cook 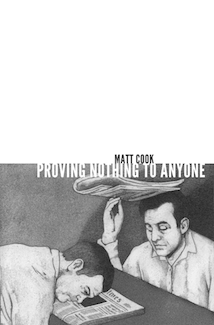 Matt Cook is one hell of an illusionist.  He has tricks up his sleeve like a modern Houdini, slick patter like some neo-Mark Twain and a sense of humour like the immortal Bill Hicks.

Cook is sailing the poetic seas somewhere around the sea of the surreal but just when you think you are lost you are so utterly found.  Cook has some strange and spectacular abilities.

You're walking home right now because
You were attacked by black flies at the punk rock coffee shop.
You found yourself taking the black flies personally,
Which is always an important signal.

The bread factory is making below average bread but it smells fantastic.
People from nowhere who used to live somewhere have decided to live here now.
All they talk about is somewhere and they never mention nowhere.
Dirty little birds the size of doorknobs are living above the drugstore.

You're a second-rate man living under an assumed name in a first floor apartment
But it's a nice apartment and the windows look out on the park.

Other than the windows looking out on the park,
Things are generally wrong everywhere.
Your shoulder is malfunctioning.
You're running low on contact lens solution.
You have a full head of hair and you're unemployed,
But you could pass for a bald man with a job.

Matt Cook clearly has a vibrant sense of humour, it's a type of entry way into the more serious game afoot.  There is nothing conventional about his gently twisted take on things.  Try this, Matt Cook's poetry, to this reader, appears to be a cross between Richard Brautigan and Raymond Carver.

Publishing Genius Press is doing Baltimore proud with a volume like Proving Nothing To Anyone.  Matt Cook has published three previous collections of poetry, The Unreasonable Slug, Eavesdrop Soup and In the Small of My Backyard.  My new goal in life will be to find these three books, this sort of intelligent writing doesn't happen in a vacuum, because I'm betting they are gems.

If the birds sang in English,
The morning would be unbearable.

I woke up feeling hopeless and was comically jolted into happiness
By simplistic, tragic optimism found in an op-ed column
Which confirmed my pessimistic superiority
And I felt better right away.

It was the sort of morning where one goes to a cafe and
Orders a meal associated with a later period of the day.

I made small talk with a man who made even smaller talk with me.
We talked about the relative merits of bicycled locks
Then the discussion broadened into the nature of human trust.

The beautiful tropical birds
Eat the same thing every day.

If Matt Cook is going to be the ringmaster - then I am in.  I was completely captivated in the first pages of this book and my wonderment hasn't ceased.  Cook writes poems that walk a fine line between the obvious reality (if there is such a thing) of the world we are all aware of and that imagined world where we conjure what best makes sense.

We Drove Into Town

We drove into town
To buy dead animals and beer
And white wine for the girls.
Cornwallis was driving the car.
An expert was talking on the radio.
Cornwallis knew more than the expert did,
Which made us feel strong.
We went to a farmer's market.
Cornwallis saw a man he wanted to avoid—
A minor character he knew from his high school days.
We bought a dead chicken and some new potatoes.
The dead chicken was expensive,
Because it was a chicken that had had a good childhood.
The girls requested a dead chicken that had a good childhood.
We drove away, successfully avoiding the minor character.
In the parking lot of the beer store,
We saw a dog leading an unexamined life.
The radio was now threatening to give away prizes.
We went inside and the dead chicken waited in the car.

Sommer Browning, author of Presidents (And Other Jokes) had this to say about Matt Cook's Prove Nothing To Anyone,

Matt Cook sings the unsung—the restaurant supply store, the back of paintings—while
teasing out unexamined lives. His poems point to our emotional slippage, revealing the
Spanish Cement Mixer to be much more than the Spanish Cement Mixer. You're all like
"Nuh uh" and these poems are all like "Uh huh." I love this book.

And I agree with Sommer Browning.  Uh Huh.