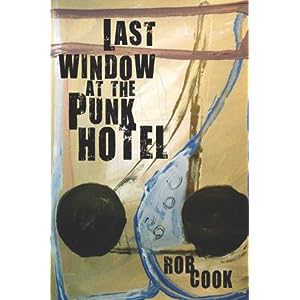 At first glance, New York poet Rob Cook's surreal poetry might unnerve an unsuspecting reader.  Cook has found a voice that is so precisely his own, new rhythms, new rhymes, that his world may appear foreign at first.

Nothing could be further from the truth.  Last Window in the Punk Hotel rants surreal but you'll find yourself tied to its purposes again and again.

Cook's language is its own guide and shortly into reading Last Window at the Punk Hotel the reader finds themselves making the same leaps of faith as Cook, drawn into his intelligent will, a resident, if you will, at Cooks' "Hotel".

Mid-September, the air cool,
but who knows for how long.
The exterminator knocks silently
on each door, and so another month
goes by, and the cockroaches survive.

At any moment the city could disappear,
the pigeons close all the wounds
they see through, but not to hurt their friends
the roofs and ledges and windowsills.
This week a family of Mets blankets moved

into the next apartment. Remarkable
how much noise a blanket generates.
But friendly also. A basket of waxed
apples left on the morning doorstep
with the rest of the trash.

The tenement where no one speaks
wrecked here during the puddle riots of 1887.
Since then, the rabid sky hiding
behind the curtains in Apartment 11
with Herman and Asher Rosanetz

who can be heard most of the hungry daylight
fighting over a mistake in the month's
bank statements or utilities bill or list
or cold cereals that can still be trusted,
and that can still endure their crumbling teeth.

Cook seems to be mining that vein of subconscious thought where every pronouncement he makes moves from the absurd to the obvious as soon as he says it.  Neat trick.

Watch how in this next poem you keep nodding in agreement...

the k-mart walls & afternoons
painted in the albino
tones of lulls between jewelry departments—
invisibility, not sleep,
at discount ceilings.

the smells of fondled
shirts & hangers
too slow to be
food or prairie.

the cold, hard-to-find air here
is either fake
or mined
from the starvation-dressed
mannequins

p.a. system music where everything is
nervous, unfinished.

a commercial obituary: "i was always fatally tired at k-mart."

the existence of coupon-wearing cashiers
perceived only in measurements
of electronic decimals.

—shoe thefts that happen only in the crawl of hidden cameras—

nobody says "the air is hungry."
nobody tells them the long lines,
the long credit card lines
cause the celebrities
on tabloid covers to wither
within range
of their jasmine
mansions.

which employee will resist
the lies
of his paycheck.

which employee will admit to the bottomless heavens
of anger ahead of him.

"it is not a movie. it was never
a movie," a saleslady tells
her frontier of strawberry blouses
where rain is accomplished
only by staring.

who will pay for the scars caused
by the store lights,

antiseptic on Tuesdays
& glaring on the other, unnamed days

when the parking lot gets planted
with corn that tastes
like it's lost.

"will we get to play on the shelves?"
a boy asks
with his hands that still smile.

his mother blushing with expired twilights

will not tell him the birthdays
are no longer counted,

will not admit that the shopping carts
are the skeletons
of still-dreaming caribou.

there is always food starving at k-mart.

there is always one lethargic employee
whose shoes are happy.

a sales counter made of stillness.

I, too, bought a necklace
that came to the middle
of its slithering there.

There are 153 pages of poetry in Rob Cook's Last Window in the Punk Hotel and the more I read the more I was tempted to share all of them with you.

Rob Cook, as a surrealist poet, proves it's not a skill like harnessing, but a
release, like inviting the wind in.  And when the wind and the poet become one, the
duende, the deep song from the center comes alive and breathes its momentary
but long lasting touch upon your soul.  It's an intuitive lyrical dance...the duende.
It comes and you put yourself in its way.  Rob Cook has mastered the dance.
Find his poems online, find his book, wrestle an angel for it, sucker punch a
muse to read it.

Michael Dennis says that Rob Cook's thoroughly entertaining poetry is a deep mine of modern thought and everywhere you look there are nuggets of gold.

We walked the wrong way home
from Spring Street Natural.

The direction to the wrong world.

It was cold, late.

or the woman behind a broken window
feeding her mouth
to a child.

A New York Knicks thug
demanded our money
from the maw in his hooded sweatshirt.

The traffic signal screamed once
and went blank.

It was still late in the wrong world.

You walked faster than I.

The streets kept getting smaller.
No people. Just the outlines of people,
whispering in the slang of terrified rats.

There was a man held together with Christmas lights,

and the sound a car makes
when it's angry.

The dogs dangling from the trees
didn't cry, though
they seemed part of our wounds.

We didn't turn around.

We didn't hear the blood
we'd lost pulling itself
along the ground behind us.


www.rainmountainpress.com
Posted by Today's book of poetry at 8:54 AM