Before the First Word - The Poetry of Lorna Crozier, selected with an introduction by Catherine Hunter (Wilfrid Laurier University Press) 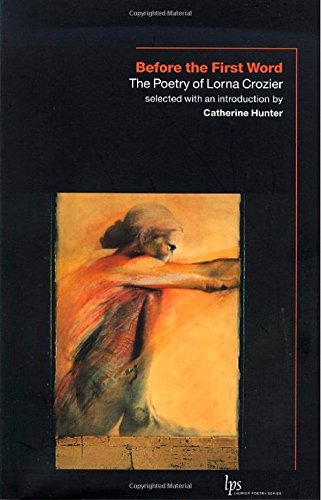 I am newly convinced of Lorna Crozier's vast talents.  Before the First Word makes clear to Today's book of poetry - what has been obvious to many for a long time - that Lorna Crozier is one of our best poets.

I do not personally have a vegetable fetish nor am I generally attracted to vegetable poems but Lorna Crozier's "Carrots" certainly won my attention.  Before the First Word is a short, crisp selection and Catherine Hunter has done well.  These poems come from the period from 1980 to 2002 and during that time Crozier had a big output with thirteen or fourteen books.  "Carrots" is a confident choice from an editor totally at ease with the certainty of the poems.

So today we start with a vegetable poem.

Carrots are fucking
the earth. A permanent
erection, they push deeper
into the damp and dark.
All summer long
they try so hard to please.
Was it good for you,
was it good?

Perhaps because the earth won't answer
they keep on trying.
While you stroll through the garden
thinking carrot cake,
carrots and onions in beef stew,
carrot pudding with caramel sauce,
they are fucking their brains out
in the hottest part of the afternoon.

Crozier's poetry is witty, poignant, beautifully plain spoken narrative with startlingly clear moments of revelation, quick, deep Alice Munro like glances into our very nature.  It is like meeting someone with small town manners and common sense as well as big city savvy.

Three days ago I was having a discussion about poetry with my dear friend Stuart Ross.  He was asking me what I thought of Lorna Crozier's work.  I replied quite casually.  He should have punched me.  I'd certainly give him a different answer today.  Today's book of poetry is newly smitten with Lorna Crozier.

It was the wild ones you loved best,
the boys who sat surly at the front
where every teacher moved them,
the ones who finished midterms
first, who showed up late,
then never showed at all.

Under the glare of outdoor lights
you watched them bang
their hard bodies against the boards,
gloves and sticks flying.
In the cold they looked back at you
through stitched and swollen eyes,
smiled crookedly to hide
their missing teeth,
breathed through noses broken
in a game or pool-hall fight.
There was always someone older,
a fist and grin
they just couldn't walk away from,
there was always some girl, watching.

They were the first boys you knew
who owned a car, who rolled
a thin white paper, who talked
out of the side of their mouths,
cigarettes burning.
You watched them fall
quick and bright and beautiful
off the highest diving boards,
you watched them disappear
then throw themselves on top of you
till you thought you'd drown.

Oh, they were cool and mean,
but sometimes they treated you
with such extravagant tenderness,
giving you a rhinestone broach
they'd nicked from Woolworth's,
a fuzzy pink angora, giving up
their jackets on an autumn night
to keep you warm. How you loved
to move inside the shape of them,
the smell of sweat and leather
kissing your skin. For months
you wore their hockey rings
wound with gauze and tape
as if one day
you'd need to bind a wound.

The wild boys had the fastest
tongues, the dirtiest jokes,
and told anyone who'd listen
what they'd done to a girl
the night before
though in the narrow darkness
of a car or on a blanket
by the dam where eels slid
just beneath the surface, you knew
you did it to each other
and the words they said were sweet.

The boys you loved
knew everything, guided your mouth
and hands, showed you what you really
wanted from this life. Now,
it is their brokenness
you long to touch, the parts
they left behind or lost
as they learned too soon
too many years ago
what it took and took
to be a man.

Today's book of poetry has a new task.  I have five Lorna Crozier books on my shelf and two by Lorna Uher (a younger Lorna Crozier), that I am now going to have to reread before I do anything else.  Then all of my interns have to read them too.  It's not easy working here at Today's book - but the pay is great.

Before the First Word is another stirling example of why the Laurier Poetry Series is absolutely essential.  Along with this tasty sampling of Crozier's work, Catherine Hunter really has made a fine selection, there is also an excellent introduction to Crozier by Hunter, as well as an Afterwords by Crozier herself.  The Laurier Poetry Series remains the series of record for Canadian poetry.

How to Stop Missing Your Friend Who Died

The moon over Vancouver Harbour
is full and red.
Through the window
you can see a barge go by.
It is empty, returning
to whatever country sent it out.

You can't see any lights
but someone must be steering,
someone who doesn't know
you are sitting behind a window
that overlooks the sea.
The moonlight makes the barge
more important than it really is.

Then there's a sailboat
and a heron.
Its legs stretch so far behind
when it's flying
it forgets they're there.

I have been waiting for more than thirty years but i finally saw Mary Margaret O'Hara in concert earlier this week.  I left the concert hall convinced she is a Canadian legend/saint of a new kind.  I have to do me some more Lorna Crozier reading this week but I'm fairly certain I'm going to feel the same way about Lorna Crozier soon. ABOUT THE AUTHOR
Lorna Crozier’s work has won many awards, including the Governor Generals Award in 1992 (for Inventing the Hawk), the first prize for poetry in the CBC Literary Competition, the Canadian Authors Association Award for Poetry in 1992, a National Magazine Award in 1995, and two Pat Lowther Memorial Awards (1993 and 1996) for the best book of poetry by a Canadian woman. She has published fourteen books of poetry, most recently, Whetstone. Born in Swift Current, Saskatchewan, she now lives in British Columbia, where she is a Distinguished Professor at the University of Victoria.

ABOUT THE EDITOR
Catherine Hunter is a poet, novelist, editor of the Muses’ Co. Press, and associate professor of English at the University of Winnipeg. Her most recent work is the novella In the First Early Days of My Death.