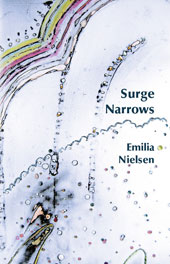 "Surge Narrows is gorgeously sensual and sharply precise — if we could taste it, this book would be salmonberry.  It would be salt.  To read these poems is to stand under a waterfall, letting the words rush like cold, clean water over the skin.  A powerful debut."
Anne Simpson

The heart is getting shit-faced.  Can't hold the gaze
of tetchy waitresses, bartenders. Cleans its pocket knife.
Sharpens fork tines. Just because. Tests irony. Stiff upper
lip and downing another round. The heart is doing a bit
of pickling, a bit of self-preservation. Has never been so
wrought. Likes it straight up, no chaser.

"I would highly recommend this book for those who love or are native to the west coast.  It’s so lovely to read a poem that compares “unruly hair” to old man’s beard (it’s a kind of moss that’s especially useful as nature’s toilet paper—you’re welcome).  To me, reading these poems is like a trip home, to the woods behind the house where I grew up, to the landscapes I drove through on road trips, to the secluded beaches and forests I miss when I’m living in the big city. If you need another reason to pick up this book, let me tell you Emilia Nielsen has top-rate taste in fellow Canadian women poets; she quotes Roo Borson (“I think my heart is a sad device”) and Phyllis Webb (“My universe opens. I close. / And open, just to surprise you.”)  Are not you convinced?
Casey - The Canadian Lesbrarian
( http://caseythecanadianlesbrarian.wordpress.com/2013/08/14/the-heart-has-never-         surfaced-more-queer-a-review-of-emilia-nielsens-poetry-collection-surge-narrows/)

We'd do high school by correspondence
instead to moving to town, get dogs and speedboats,
learn to make root beer, become hermits together.
Said we wouldn't leave.

The selections I've included are but fragments of the finished works - and have a strength of their own, but naturally these fragments don't carry the weight of the completed poems.

Here is Nielsen's poem "Indifferent Season" in its entirety.

There ain't no cure for
the summertime blues.

Yellowjackets held with-
in their skin's slim bars.

Give me a moment to Ophelia, to float-
summer's too much in love with its own heat.

Kiss my collarbone, my someday tattoo:
blue water lily. Offer me one breast.

Pray for a life without plot,
a day without narrative.

This kick of gas flame, weeping
willow, for taprooted melancholia.

A millstone, a horse on the road:
Slow Down and Circle Wide.

The turkey vulture's wings a scythe,
dihedral; its aerial circumambulation.

Neither for me honey
nor the honey bee.

My mouth, obtuse:
no spark of new love.

ABOUT THE AUTHOR
Emilia Nielsen was born on Vancouver Island and now lives in Vancouver, BC.  Her poetry has appeared in literary journals across Canada including: The Antigonish Review, Descant, Event, Contemporary Verse 2, The Fiddlehead, Grain, Prarie Fire, Room Magazine, and was nominated for a Pushcart Prize in Poetry by PRISM international.  Currently, she teaches in the Institute for Gender, Race, Sexuality and Social Justice in the Faculty of Arts at the University of British Columbia.