Today's book of poetry:
What To Do If You're Buried Alive.
Michael Meyerhofer.  Split Lip Press.  Richmond, Virginia.  2015. 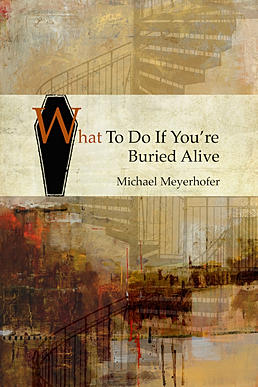 Michael Meyerhofer's What To Do If You're Buried Alive is the work of a seasoned pro.  These poems are solid like that friend who would cut off their own hand before they let you down. Meyerhofer would be typing with one hand before he'd leave a reader stranded on the page.

Today's book of poetry doesn't want to speak for a man we don't know but I'm willing to bet Meyerhofer is from the "try, try, try again -- but don't be a damned fool about it" school of hard knocks.

Three days after my mother's heart
kicked up grave-sod like an errant mule,
my dad's alcoholic father came by,
carting along his oxygen tank,
its little red wheels squeaking down
a sidewalk of women in black dresses.
This man who drank straight gin
and didn't even know for years
how many children or rottweilers he had--
still decades before DHS--
sardined up in that country shack
I only saw once, as a yellow bulldozer
took ten years off my father's eyes.

They kept him away, so I grew up
picturing him as a rural Hitler
who dreamt of twisting out cigarettes
on the scrotum of the baby Jesus.
But there he was--that old grandfather
I'd never seen, frail as a psalm
with plastic tubing stuck up his nose.
This day will pass, he swore,
squeezing my hard shoulder. Meaning
of course my mother in her casket,
her hair all wrong, just a dash
between her first and last breath.

I nodded along, but wondered how
this sentence fragment of a man
ever managed to lock my father in closets
without food--my father,
who can do push-ups until sunrise,
who has three college degrees,
who could have busted him like kindling
but instead, took him inside
with one open fist on his shoulder.
I am tired of the alchemizing the indivisible,
so here is the lesson I want to forget:
after every waste, the heart
like a dog betrays us but we,
when we must, call this forgiveness.

These hearty, salt-of-the-earth poems all sound like hard won wisdom.  The first thing Today's book of poetry noticed about What To Do If You're Buried Alive was that almost every single poem in this collection was solid as a rock.

[I've mentioned it to our writers here at TBOP, about their overuse of platitudes and cliche, their insistence of flattery.  I am currently tied to a small chair in the closet of my office.  When you are finished reading this please send someone by to get me out.  I'll discipline my staff at the appropriate time in response to this insurrection.  And they, the writers, pretty much assured me that it would be business as usual, threatened actually.]

What I meant to say is that there are hills and valleys in every book, not so much here, Meyerhofer and his editors are metronome solid, tick, tick, tick.

Like most of us, it sounds like Meyerhofer has had to weather some considerable ups and downs -- but as Rocky Balboa intoned, and I will have to paraphrase, "It's not how many times they knock you down that matters - it's how many times you can get up!"

My Mother Sent Me

a text message
from her coffin.
It said Glad
you're not here.
She's always doing
stuff like that. She says
it's to help me
savor my remaining
days. But I know
it's because I'm
the only one left
who hasn't changed
his number.

Michael Meyerhofer's style could be romantic-realism but I doubt it is a label he would embrace.  I heard these poems like music when I was reading them.  They read like a delicious cocktail of Willie Nelson, Tom Waits, a reasonable Charles B. and a tick of Saint Raymond of Carver.  Those are all heroes of mine but I realize it is a little like using spices to describe a stew.  It's all in the way of compliment.  Meyerhofer's camera is both subtle and technicolour and it is on all the time.

The guy across from me is wearing spurs.
Indiana summer. As far as I can tell,
he got here in a pickup. But there he is, leaning
with a sweating bottle in his fist,
smiling with saffron teeth at the bartender,
big metal sundials trailing his boot-heels
like he meant to saddle up and ride
for the saloon the remembered we have
internal combustion engines now,
plus palominos tend to drip even more
than your average oil gasket. But why the spurs?
Imagine them snagging the floor mats
as he tries to shift gears, driving his knees
into the steering column. Still, there's music
in that steely thump as he strolls
from barstool to pool table, knuckles rapping
the pasture-green felt, a reliable jingle
following him the way they say flowers sprang
from the footprints of the Buddha.
I doubt that lasted, though. So hard
to push through ignorance toward something
called enlightenment when everywhere
we go: blossoms, blossoms, blossoms.

What To Do If You're Buried Alive comes from that noble and strong school of narrative poetry, Meyerhofer is driven to tell us his stories.  Some of these we will recognize as ghostly parallels to versions of the stories we all know, our own narratives, other poems will act as maps for the trips we will eventually all be forced to take.

Most importantly we recognize that Meyerhofer's certainty in What To Do If You're Buried Alive casts a strong light to help navigate whatever challenges lay ahead.

ABOUT THE AUTHOR
Michael Meyerhofer is the author of four poetry books and a forthcoming fantasy trilogy. He has won the James Wright Poetry Award, the Liam Rector First Book Prize, the Whirling Prize, five chapbook prizes, and other honors. He earned his B.A. from the University of Iowa and his M.F.A. from Southern Illinois University Carbondale. He grew up in Iowa where he learned the value of reading novels, lifting weights, and not getting his hopes up. He currently serves as the Poetry Editor of Atticus Review and lives in Fresno, California.

BLURBS
"Set against a backdrop of brilliantly rusty artifacts, and infused with personal history, this book showcases Meyerhofer's skill at advocating for overlooked people and the places they inhabit. With a compassionate eye, and his trademark sense of humor that hooks readers from the very first page, Meyerhofer sends us back to our earliest memories, and shows us a world of heartbreak and wonder."
-  Mary Biddinger, author of A Sunny Place with Adequate Water

"Listen to this little sample of Michael Meyerhofer's music as he recalls working in an Iowa warehouse, avoiding 'forklifts / steered by broken / marriages / and thermoses full of Jim Beam,' or remember his mother's failing heart 'kicked up grave-sod like an errant mule.' Whether he's describing the brutal machismo of Iowa high school wrestlers or the tenderness of his father nursing his childhood wounds, Meyerhofer sings in a pure American tenor, his voice haunted by late night diners, small town heartbreak, and somehow, out there in the desolate vastness of the heartland, a flash of humor and a sweet glimmer of hope."
- George Bilgere, author of Imperial

"Between the marks the world leaves upon us, the designs we choose to mark ourselves and our worlds with--these scars and tattoos are the territory Michael Meyerhofer explores in What To Do If You're Buried Alive. Through pain and loss, Meyerhofer's poems are harrowing prayers searching for 'the charms of language' that might lead to forgiveness, to redemption, to love. While never flinching from confronting the irredeemable damage we do to one another, these urgent and necessary poems remind us 'that if you focus on what hurts, / face it wholly, it dissolves / like a light from a burnt-out bulb, / a curtain gone up in flames.'"
- John Tribble, author of Natural State

Michael Meyerhofer
STEM reads Interviews
video: STEM Outreach NIU
(In this video Meyerhofer talks about both his work as a fantasy writer and as a poet)