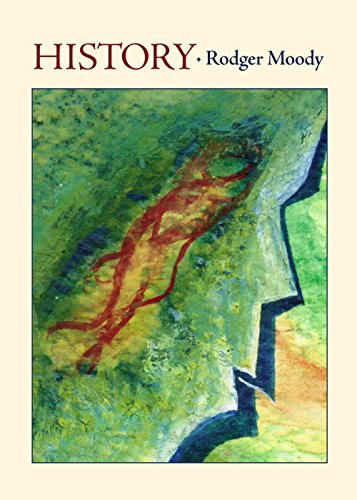 This is the second time Today's book of poetry has had the opportunity to read a book of poems by the talented Rodger Moody.  The first was Self-Portrait/Sixteen Sevenlings and we wrote about that here:

Moody was brilliantly terse with some self-composed restraints in the first book of his we looked at but clearly he has more than one trick up his sleeve.

With History, the curiously clever Moody has taken off the gloves and allowed himself fuller disclosure.  I get the impression that Rodger Moody is a soft spoken man, very considered.  That would be just like these poems.  History has a quirky certainty to every word, it hums honest.

I've come back
to tell you about my life
along the river, about the rusty iron
bridge where my friends shot carp,
about how the cruelty of farmers
is the cruelty of fathers,
about how they lingered in hayfields
or drank beers on dark back roads,
or how they arched over small town girls
and summer shorts so tight each pair
shaped a butterfly between a girl's legs.

Moody is telling the story of his own life and it is story-telling of the highest order.  This story is shaped by and reflects the America of Moody's generation as he reveals the innermost workings of a heart that wants to feel joy.  Rodger Moody's History is hopeful in the face of less hopeful times.

He can also be one outrageously funny dude.

Milo is reading over my shoulder and has just insisted I rephrase that last sentence.

Now Milo is sitting in the corner, facing the wall, and memorizing my NO EDITING FROM THE ELVES manifesto, and he's wearing the Jewel Poetry Cap of Shame.

But he was right.

Rodger Moody can also be a darkly outrageous and funny dude.

I can hear Milo snickering in the corner.  Kathryn is now wearing the Jewel Cap.  It looks better on her.  Wait until Milo sees his homework!  It's Ezra's Cantos for Milo tonight.  That will desmirk him.

Rodger Moody's History is a journey to the present for the poet and it encompasses all of his past, all the ghosts, living and dead.  Today's book of poetry identifies with these poems, they seem carved from such a similar understanding of the world and it's tumultuous currents.

It's 1987. I'm married now.
I have two boys. My hair
is shorter. I drive a Subaru.
Old friends hardly know me.
The mustache that once curled
over my delicate upper lip
is gone. Don't get me wrong, I wasn't
decadent, I was just looking
for myself in the long dark
of my early years when Dad
prodded me into his own lost dream.
He thought the way to hold
your head above the water
was to see the world in a sailor suit,
one made to order for any boy
who wanted to press his rubbery frame
into its blue lie, blue the color
of warmth, a warmth that would never
penetrate the smooth skin of desire.
No matter how gentle the wind
appeared in 1969, there was a big
lie in the air around everyone's body
in that year of riots and napalm.
Now my own boys fight;
I ask myself what can it mean?
But there's love in how they look out
for each other; then the older one
will turn on his smaller brother
like a stray animal too long on its own.
But for what I still ask myself?
A parent's attention shifts
between births almost like fashion
among those monied enough to care.
I can't follow it all, and wonder
will my boys ever see
their real father, how he told
the ship's chaplain that he wouldn't
sail when the ship left port
for the Gulf of Tonkin. Would
they understand his three months
on the psych ward feigning insanity
to avoid the craziness of a country
gone totally mad? Unbending intent
was my phrase, the saving grace
that steeled my blood against those
who wouldn't listen, that carried
me through to those who would.

With History, Today's book of poetry's second Rodger Moody book, it is confirmed, we are big fans and very fond of his poetry.  We liked it before, we love it now.  I don't want to say that Moody is doing it quietly, he is an understated, walk softly poet,  The big stick aspect would be his clarity.  Moody is as honest as your best friend, you always know exactly what is in his heart.  His very human heart.

Thoughts on the Seven Year Itch

In the beginning I loved my wife,
and she loved me, opening the gates
to her passion, giving of herself
and taking, in turn, from me, that which
I had to give. But the years wear us down,
and the children, and the responsibilities
curb the fire, set the mind to thinking.
There's danger in freedom, desire the last
thing you want to leave behind when you leave
the house. The day comes as the front porch
fades from sight, and the days tumble over one
another like the pile of dirty clothes
by the bidet. The street outside is gravel,
a cul-de-sac where the neighbors build their fences
flush against the street, guarding every inch
of their bought and paid for freedom. I dream
about the beach on the Atlantic side of the Cape,
debris and waves crashing together on the shore,
a legacy of sadness like the millstone marriage brings
to those with weak hearts; saltwater and sea air,
rightly rolled joints, autoeroticism, all of these help,
if only a little, in the half-light of dreamy
daytime thoughts of romance and meeting someone new.
In the end it doesn't add up, or even need to.

A reluctant optimist.  That's the ticket and I'm going with it.  Rodger Moody's History is first a modern life contemplated with compassion and gentle consideration, and secondly, an accurate emotional barometer of our times. 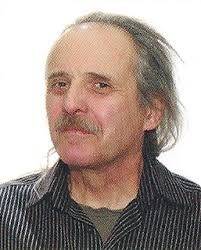 ABOUT THE AUTHOR
Rodger Moody was the recipient of the C. Hamilton Bailey Fellowship in Poetry from Literary Arts in Portland, Oregon. His poems have appeared in ZYZZYVA, Caliban, Indiana Review, Mudfish, uspstreet, and other magazines. He is the founding editor of Siverfish Review Press.

BLURB
Rodger Moody s HISTORY is not just his own story. Yes, these poems tell the story of one man s life from the American mid- century on to the present moment. But they also chart the ways a soul may gradually grow more ample, complex, supple, and humane. From childhood bewilderments and adolescent desires, to inevitable encounters with the world s savageries and insanities, and then to the tender dilemmas of parenthood and the stern losses one must learn to absorb, these poems reveal what Moody calls the real work. As he says in the title poem, the labor of soul-making begins in the long dark before you turn on the lights, and is lonely / against the backdrop of ordinary days.