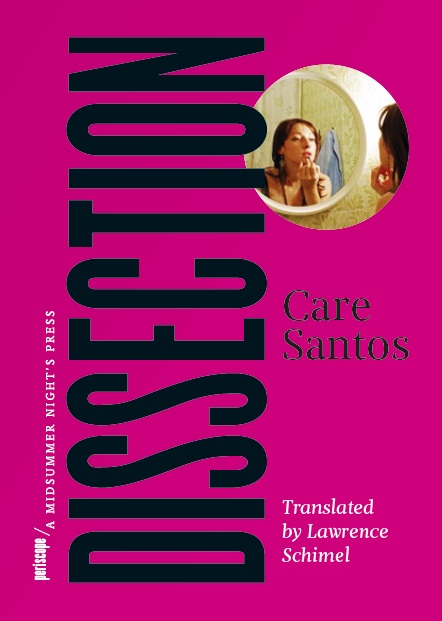 Today's book of poetry is honoured to have the Spanish poet Care Santos visit us care of A Midsummer Night's Press.  Although Santos is best known for her novels and short story collections we would never suspect a thing, these poems are poet born.

The voice of these poems demand a nod of the head, a tilt of the hat, a round of applause for Lawrence Schimel, the translator.  These poems never feel translated, they still feel wet from the hand of the poet.  Today's book of poetry gets the feeling that nothing was lost in translation.

Care Santos has a delicious and savory sense of humour and you'll find it in full bloom in Dissection.  Santos has that last line knock-out punch down pat.

My vagina above the chimney
would be a good decoration.
"...And it gave birth to my three children," you'd tell
visitors, with a trace of pride.
Of course, mine would not be the only one
nor even the most appreciated (as is known,
the hunter appreciates the difficult)
but in the collection
of stuffed and mounted vulvas
it would enjoy a certain privileged position.

On rainy days, alone,
you would drink a coffee before the chimney
looking at your trophies.
You'd close your eyes.
You'd shed tears
in perfect time with the beat of the memory
and then you'd close the shutters
and say goodbye until the next day.

All murderers usually miss
the breath of life they steal from their victims.

Santos needs her sense of humour because she also has some serious despair.  I've always wondered why so many extremely intelligent people are so poor at protecting their hearts.  Santos breaks her unprotected heart just like the rest of us and it is a beautifully sad fall.

I
I hear cats meow while you say
"It's late."
They seem angry (perhaps your presence bother them):
they're creatures not especially given to social life.
"I'm going to hang up,"
you mutter,
"my dinner is getting cold."
They complain, piteously, wearied: they detest you.
You invade a place beside their owner
who belongs to them.
If only they knew how to do it
tonight, slowly, while you're sleeping,
with a single blow, they would open your throat
and fill you with sawdust and cotton
after devouring your entrails.
But no.
Those creatures and I are very similar:
our courage reaches only to humiliate ourselves.

II
Words like stakes for this farewell
that doesn't ever end.
I crack, I split into pieces, I grow old,
the sadness of my skin dirties the tiles.

With each new reply, one of my limbs gangrenes,
but you are calm because you haven't noticed,
you keep talking. Shattering. Demolishing.
Tomorrow I'll buy large quantities
of cotton and sawdust. (Embalming oneself
is quite difficult, but I adore challenges.)

The cats alliterate their inharmonious hates.
What an absurd chorus you've given my collapse.

III
If I knew their names I'd say I liked them.
Now I envy them because they sleep with you.
I sleep with death. It is my pet
(or cotton and sawdust). It bears a cat's name.

IV
The night is very dark or I've closed my eyes.
The silence warns me that I no longer breathe
or that you've hung up the phone (it's the same).

V
Frost coats the thresholds
of all the exits of my life.

The reader can't help but be pulled into her longing to be whole, to repair or recapture, love.

Vampire (according to Freud) is that which causes damage
because they've made it immune to suffering,
because it ignores the pain it causes its victim,
because it ignores, no more, because it ignores.
A vampire, legend tells us,
can never sleep outside its house,
nor be far from its bed and shelter
that makes the monster monstrous.

At last I've understood
you're aversion to trips,
or the rejection of sleeping in strange beds,
or of going out very early
or dishes with garlic
or so many other things.

I've dismantled the bed, and I give it away.
There are no coffins for two sleepers
(not even in IKEA). Now our bedroom
is a crypt.

My carelessness already has a just price.
I can't find my reflection in mirrors.

Today's morning read was a real frown and tickle.  Everyone liked Dissection and the poems were a gas to read aloud -- but there were so many laugh-or-cry moments it was hard to keep poetic equilibrium.

Today's book of poetry was deeply impressed by Care Santos and Dissection, so much so that we are evoking the rarely used 4th POEM CLAUSE.

This last poem is an indulgence and because I'm the boss in this small universe, indulge I will.  I thought the last poem in Care Santos' collection was near perfect, here it is.

If you've reached here
and you're still breathing
you've already paid for everything you've done. 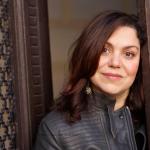 ABOUT THE AUTHOR
Care Santos (Mataró, 1970) is one of Spain’s most versatile and prolific writers. Writing in both Catalan and Spanish, she is the author of over 40 books in different genres, including novels, short story collections, young adult and children’s books, poetry, etc. She has won numerous prizes and awards, including the Ateneo Joven from Seville, the Alfonso de Cossío Short Story Prize, and in young adult literature both the Gran Angular Prize and the Barco de Vapor Prize, among many others. Dissection won the Carmen Conde Award for a book of poetry by a woman writer in 2007. Her most recent adult novel, Desig de xocolata, won the 34th Ramon Llull Prize. Her work has also been translated into Basque, Galician, French, German, Greek, Hebrew, Italian, Korean, Lithuanian, Norwegian, Portuguese, Romanian, Swedish, as well as English. She lives with her family in Mataró, Barcelona. 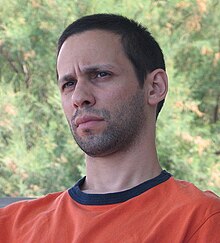 ABOUT THE TRANSLATOR
Lawrence Schimel (New York, 1971) writes in both English and Spanish and has published over 100 books in many different genres as author or anthologist. He has won the Lambda Literary Award twice, for PoMoSexuals: Challenging Assumptions About Gender and Sexuality (with Carol Queen; Cleis) and First Person Queer (with Richard Labonté; Arsenal Pulp). His children's books ¿Lees un libro conmigo? (Panamericana) and Igual que ellos/Just Like Them (Ediciones del Viento) were chosen by IBBY for Outstanding Books for Young People with Disabilities 2007 and 2013, respectively, and No hay nada como el original (Destino) was chosen for the White Ravens 2005. His picture book ¡Vamos a ver a papà! (Ekaré) was translated into English by Elisa Amado and published as Let's Go See Papá! (Groundwood Books). His most recent publications as a translator are the graphic novel EuroNightmare by Aleix Saló (Penguin Random House) and the forthcoming children's book Mister H by Daniel Nesquens (Eerdmans). He lives in Madrid, Spain, where he is a Spanish->English translator.

We here at TBOP are technically deficient and rely on our bashful Milo to fix everything.  We received notice from Google that we were using "cookies"
and that for our readers in Europe there had to be notification of the use of those "cookies.  Please be aware that TBOP may employ the use of some "cookies" (whatever they are) and you should take that into consideration.
Posted by Today's book of poetry at 7:21 AM