Laura Clarke is hilarious.  She is hilarious in all of the right ways.  Decline of the Animal Kingdom is a bestiary gone delightfully awry.  These poems will bring out the animal in you.

Did You Know? Fun Facts About Mules

Mules are sterile and cannot reproduce. However they are anatomically
normal and males must be gelded.

There was a boy who fed apples to the Shetland ponies just so he could
wrap his hands around the electric fence. Kind of like when your
cousin slit his wife's throat open and locked himself in the garage with
the gas on.

Mules are a"made-to-order" breed of livestock. These fine animals can carry
you safely on a trail, pack in the high country, compete in the show ring or pull
logs and other equipment.

He didn't manage to kill either of them. And those fine black hairs will
never fully come off your grandma's hand-knit-shawl. Wet cloths don't
work. Vacuums don't work. The preciseness of your hands doesn't
work. Might as well weave them in.

Mules are popular for many reasons. Pleasure riders find that mules are
smooth to ride, sure-footed and careful.

There was a woman. No, she wasn't pretty. Pretend I'm Nick Cave
or a male poet or a female poet--there's nothing like a serial killer's
eloquent voice and moonlight and the trunk of a car and a winding
road. The sound of middle-aged neighbours arguing about terrariums
will drive you crazy in a sunlit apartment on the third floor. Sorry, him
crazy. In any season.

The mule combines the best features of both of its parents.

Do regurgitated greens strangle your appetite? Do you only eat when
you're hungry? Do you abuse laxatives two to three times a week? Do
you think the people and animals you murder in your dreams will
haunt you, not figuratively haunt your thoughts, but haunt you like
real ghosts?

From the donkey sire, the mule gets intelligence, ease of keeping, sure-footedness
and longevity. The mare usually determines the size of the mule, its length of
stride, style and conformation.

I killed my neighbour with a chainsaw in a dream. I didn't mean to.
Still, I had to gather up the body parts in my own small hands and
bury them, and that changed me, both in the dream and in real life.

Haunting allegory and plenty of ghosts, Decline of the Animal Kingdom is a mule-train that you want to get on.  Clarke takes anthropomorphism to dazzling new places as she prances through the animal kingdom with both emotional elasticity and a certain moral flexibility.

If these aren't the questions that need to be asked they certainly are entertaining.  When Today's book of poetry was re-reading these poems they still barked, growled, howled and grrrr'd with velocity the second and third time round.

Geography never repeats itself.
The Tasmanian tiger live-tweets its extinction
from the Hobart zoo in 1933;
aurochs fling feces with their Holocene horns
across centuries, get dirty looks from HR.
Popular opinion shifts ever-so-seismically.
Good pets with bad press are still fucked;
terms of venery mean the world to me.
Everyone stops calling -- epochs beget epochs
between Friday night plans.
I murder your white hens, eviscerate
shell and feather indiscriminately,
smear blood all over your white chicken coop.
My eyes are beady. I ate your Greek yogurt
from the communal fridge.
I net only four percent of the Who Wore It Better vote,
the wolves having accessorized the blood
more elegantly by dragging their snouts
across fresh snow. I heard it
from the school of cod I used to hang with,
saw rumour vibrate from shell to shell
among the zebra mussels.
I've only ever eaten my share and then some.
Similar to the last known passenger pigeon,
I was last sighted in a flock of regular pigeons,
fitting right in.

Decline of the Animal Kingdom is Laura Clarke's debut but it comes with fangs fully bared, claw's out and a hungry raptors' dark and fearless heart.  The humour in these poems often comes with some blood left on the tracks.

These poems have a swagger in their brash and gleeful arrogance, Laura Clarke can burn.  Today's book of poetry didn't know whether to spit or swear they made me giggle so much.

When I finally saw the giant squid, I was like,
it's not that big. My dog pissed a heart shape
on the sidewalk and it was bigger than that.
I wanted the squid to go on forever, elephantine
subspherical suckers with finely serrated rings
of chitin, lively tentacles circling space and emerging
in the future, waving, eyes like soulful car tires,
ecstatic ink clouds enveloping birch trees and bridges.

Scientists brought the eye to my house
to demonstrate its close proximity in size
to a dinner plate, explaining only an extinct
aquatic reptilian predator matched the diameter
of its unblinking pupil, 9 centimetres or 3.5 inches.
Predictably, they placed it on an actual dinner platter,
and it looked right past me. In my own house.

Dear squid eye / dinner platter combo:
once my ex-boyfriend was hired to transport
plumbing supplies in Ottawa, becoming
so hopelessly lost in his oversized vehicle,
he was fired by end of day. The warehouse
was 20 minutes away, but he drove that truck
straight into the province of Quebec.

Today's book of poetry wants to read whatever juicy morsel Laura Clarke has planned for the future because this stuff was cherse.  Clarke has announced her arrival and made an instant fan out of me.

Decline of the Animal Kingdom is excellent coming out of the gate stuff.  You will never look at animals the same way again. 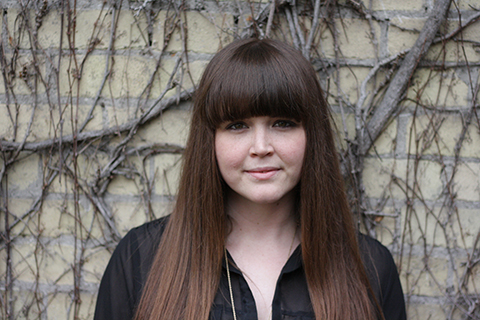 ABOUT THE AUTHOR
Laura Clarke's work has appeared in a variety of publications including PRISM International, Grain, the National Post and the Antigonish Review. She is the 2013 winner of the Bronwen Wallace Award for Emerging Writers from the Writers' Trust of Canada. She lives in Toronto, Ontario.

BLURBS
“Clarke’s mischievous, fabulist debut collection blurs the lines between the literal and allegorical as she employs a lens of anthropomorphism, an edge of misanthropy, and the slow unravelling of personae into disparate states evoking something between grace and madness. The stark, spare language of her poetry, which utilizes a variety of forms, belies its complexity . . . Clarke’s successful balancing of calculated loathing and euphoria makes for a fierce piece of performance art.”
— Publishers Weekly, starred

“The poems in Clarke’s debut collection appear deceptively simple at first glance, with the pop sheen of YouTube videos and movie reviews, but are in fact nuanced examinations of the relationships between people and animals, domesticity and the wild.”
— National Post