Randolph Thomas won the 2013 Gerald Cable Book Award and the judge was Rodger Moody.  You might remember the affection Today's book of poetry has for Rodger Moody.  We looked at Moody's Self Portrait/Sixteen Sevenlings back in February of 2014 and Moody's History back in December of 2015.  You can see both of those here:

So, Randolph Thomas had a bit of in before we opened The Deepest Rooms.  Today's book of poetry sank into Randolph Thomas world as soon as I read the first poem.  Think big couch and Old Yeller on the Sunday afternoon box.  That sort of comfort, not that sort of content.

Somehow, and I suggest some dark and magical Cajun influence, the reader is immediately emotionally invested in these poems, invested in whatever it is Thomas is selling.

My mother warns me about the water.
It will be cold, so I should ease into it.
Only if I can feel its bite
will it cleanse me, will it reclaim me.
She pulls her cap on tight, hiding her hair
and lowers her goggles
over her eyes.
Staring down at her feet, bent over
like the small bear we watched crossing the yard
one day in the fall,
she steps across the slick, black rocks,
stops near the edge, and glances back at me.
Why should I want to be so clean,
to be reclaimed?
I search the gray goggles
for my mother's eyes,
but they are not ever a bear's.
They are plastic, fogged.
Follow, her hand, reddened by the cold,
beckons.
Crossing the rocks, I almost topple.
When we saw the bear
she had already begun to say that time, like pain,
would form crystal shadows we would have to relearn
to see.
She'd said that, like animals, we would have to break
with all we knew.
Even an animal
knows when it's time to find the warm places,
the deepest rooms of caves,
the darkest water below the freeze,
where blood can thaw and flow anew.
Her mute face to me, backside to the sea,
she climbs down out of sight,
and I feel icy water on my legs, at my groin,
goose-pimples on my arms.
Come closer, someone, maybe even the water, says.
Inching along the rocks, I come to the edge.
I stare down at the surface as her head,
capped in rubber, slips under.
I stand looking down at the green, lapping water
twenty seconds,
then a minute.
There is no sign of her.
My breath quickening,
lost to the cold, clean air,
I turn to look for the pale blue station wagon
a quarter of a mile back where we left it
after driving all night through the Carolinas,
after reaching the marshes at dawn,
the cattails tipped in frost.

Thomas is a first class story-teller and the panoramic scenes he sets in almost every poem take the reader to memories long forgotten, he also gives us a few new ones to ponder.  We think Thomas is telling a story when he is really opening a door.

Thomas is like the rest of us, searching for redemption through understanding.  Each of us is at battle with the narratives we think are playing out, as though we had a say.  Ghosts and Randolph Thomas will tell us that we are in short stories with uncommitted endings, life is the big anthology.  The best stories have some idea of hope in them and Thomas knows that.

When your body welcomes mine, when we
come together on the bed, the sad
nomad I was before
takes the keys from the nightstand, makes his excuses
and slips out of the bedroom.
After drinking the dregs of our wine, puffing
the last of our tamped out cigarettes
he leaves the apartment, closing the door
and zigzagging through the light rain
across the parking lot to the car.
All afternoon while we make love, he drives highways
between here and New Orleans,
past oil refineries and through towns
of shotgun houses and tall churches.
After gliding down from the gray sky, coupling love bugs
squash against the windshield.
In one town, at a busy grocery store, he stops for coffee
and watches women he's sure are as lonely as he has been
pushing their carts along the aisles, his lips buzzing
with suggestions of getting in the car with him,
running away for a while, just for fun,
nothing heavy, no strings.
Only the uniformed guard by the door
will catch his eye, then it seems everyone
is watching him.
He shrugs, pushes open the glass door, and goes out.
The day is hot and damp, but he's dry inside,
and like some of the country he's seen
in the shadows of oil refineries along Scenic Highway,
desolate and poor. How can people
find hope here? How do they
go on? He sees himself wrecking
the car, leaving it in a ditch
or driving all night, as far as night
will take him,
but before long he stops
for a few beers, sits alone
crushing the cans, leaving them
in a line on the bar.
Soon enough he'll drive back, for he must
drive back, the road
darkening and spiraling before him,
at the tail end of many dreams; he sees himself
as a man leaving, for better or worse,
a world of fantasies, of dreams,
waking from the hypnotic roads, from the tired heat
of long similar days, from the aftertaste of beer,
and coming in late, finding the doors to the building
locked, having to knock on the window
to rouse the blurry figures
tangled together on the bed.

Hope always comes with some cost attached and Thomas knows that too.

This mornings read was elegantly subdued.  Milo, our senior tech, brought in a collection of Stanley Turrentine recordings and our entire office had a quiet, easy buzz.  Turrentine blowing elegant.
Kathryn, our new intern, led the way with the reading and it was superb.  Randolph Thomas' poems marched across the room like they owned it, each and every one of them built for survival.

It might be important to note that almost every poem in this superb first collection has appeared in a journal or literary magazine of some note.

The Deepest Rooms comes fully loaded, if these poems were jokes the punch lines would be killers.
If they were hockey players they'd have a wicked slap-shot.

The Course of the Telling

I returned from the war to plant spring crops,
was at work in the field when news arrived
that my brother was dead at Chattanooga.
My daughter ran from the house, found me
beside my plough, tugged my sleeve.

I was ninety-six, a year from death
when your mother heard me tell this
in the breezeway of my dog-trot house
in Franklin County, Virginia. She was
only five, and I, her father's father's
father, was feeble, she would say, with
pale, piercing eyes that frightened her.
She did not recall my brother's name,
but carried my likeness and story to you,
who used my birthdate, ten years past the death
of Jefferson, to teach your children how close
generations are, while my brother's face
was lost in history's unmarked grave.
Our stories are where we go when we die,
for a brief time resurrected by the living
--and then finally forgotten. As my story
is cut short, as it dims with the voices
that remember and tell--or do not
remember in full, but tell anyway,
vary by invention of fact--when all
of even these are gone, familiar things
I thought were lost come closer in the dark:
my brother's face, my daughter's steps, even
your mother's frightened eyes, and you--who kept
my tale alive--your name will be buried
with ours in the course of the telling, lost
in the stories that are no longer told.

"Our stories are where we go when we die,"  Today's book of poetry loves this line like no other.  It rings so true I want to paint it on the front of my house.  I've asked Milo if it is possible, he's looking into it.

Today's book of poetry finds it almost impossible to consider that this is a first book of poetry, The Deepest Rooms is simply too good for that. 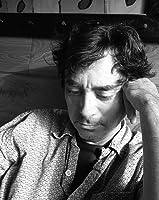 ABOUT THE AUTHOR
Randolph Thomas is the author of the short story collection, Dispensations, recipient of the Many Voices Project Award. His poems have appeared in Poetry, Quarterly West, The Greensboro Review, Seneca Review, Witness, Louisiana Literature, and Puerto Del Sol. He teaches at Louisiana State University in Baton Rouge.

BLURB
[The Deepest Rooms,] this accomplished first collection of poems by Randolph Thomas, announces itself in rich poetic narrative and character invention, well wed in the art of the persona, which has too often been rendered as unmasked autobiography in much of the poetry of the second decade of the twenty-first century. We can happily detect a sweet new sound in the work of Randolph Thomas, a young master in full career.