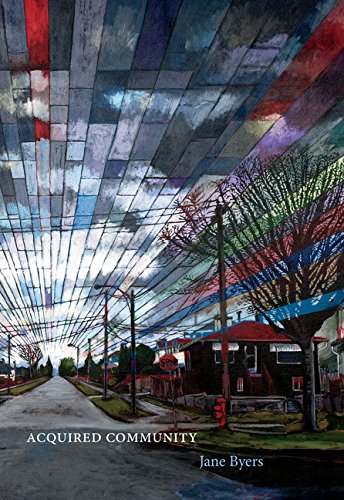 When I dare to be powerful, to use my strength in the service of my vision, then it
become less and less important whether I am afraid
- Audre Lorde

...that without tenderness, we are in hell.
-Adrienne Rich, Twenty-One Love Poems, X

Today's book of poetry had to borrow these two epigraphs from Jane Byers brilliant Acquired Community because they synthesize in such a beautifully acute fashion everything that is about to occur.  Byers gives us a deeply personal and highly politicized march into her queer experience and it is riveting.

These poems are a proud parade of perseverance rendered gallant under extreme duress; not everyone gets out alive.

The Lavender Scare
According to a concerned mother of a Women's Army Corps recruit,
Fort Oglethorpe was full of homosexual sex maniacs in WWII,
"women having the appearance of perverts have been observed--
mannish haircuts, clothing, posture, stride...
seeking to date other girls, paying all the bills."

--from "Coming Out Under Fire"

Only if we were "addicted to the practice", could we be discharged in wartime.
It was a gay time, the war.
The General ignored all our signals--
we whistled that ode to secret lovers, the Hawaiian War Chant,
said, "We're going to have a gay time tonight"
or "Are you in the mood?"
The Inspector General ignored civilians
cruising servicemen along highways near bases,
the bars we frequented, men in drag, women arm in arm.

Ignored, that is, until peacetime,
when, addicts after all, we were given blue discharges.

The Lavender Scare rendered us
shunned from civilian jobs
ineligible for GI benefits,
unable to go back to small towns and family farms.
Some of us moved to D.C., L.A., SanFran,
some started homophile groups,
some men got married but fucked other men in the bushes,
some women became stone butches and never let their lovers touch them,
some of us jumped from tall buildings.

Jane Byers writes with such mature assurance, such a steady hand.  Today's book of poetry had never read Jane Byers before but the connect was immediate, instantaneous.  There is always lots and lots of room on our shelves for such impassioned and intelligent reason.  There is always room at our table for this sort of company.

Byers shares with us a history, a herstory, that for the majority of Canadian and Americans will be entirely new news.  For the legions of our LGBTQ sisters and brothers it is a new documentation of a sad history they are all too familiar with.

Regardless of gender or disposition Today's book of poetry defies you not to be moved by these compelling narratives.  Whether singing out a questioning tune in call and response or intoning a solemn prayer Byers is captivating.

Come Out, urging,
statement--
it changes through years.
Some took offense,
mostly conservative men who had a lot to lose
but no, that's too simple.
There were women too, unwilling
to lose what little they had.

I was righteous, thought I had come out.
I'd told my high school friends, my parents, my aunt by then.
I celebrated in the streets with my friends,
eight of us in solid-coloured shirts,
walked in rainbow formation,
Made the cover of Xtra.
In my naivete, I thought I was done.

Twenty years later, I'm still doing it,
the only thing i want to have come out of is my mother's womb.
Not to the kindergarten teacher, the triage nurse,
the dentist, the law clerk, the adoption worker,
or the post woman in the condo elevator
who asks, Which one of you is the mom?
then turns to press any button she can
when I say, We both are.

The agent at the ticket counter,
glances at us with a question,
I nod before he gets the chance--
no words, but he understands.
Resignation passes over his face
with a raised eyebrow as if to say,
"When did this happen?"
I feign ignorance, glance at our kids, say,
"Follow Mama while Mom gets our bags checked."

Sometimes, and this is one of those cases, the limited selection of three poems doesn't speak to the breadth of a book at all.  Acquired Community speaks to that sense of community we find with new friends and cherished old friends, mutual understanding and respect, in the modern era this is how we build family.  We acquire people less joined by blood than by bonds of empathy.

When Today's book of poetry reads about Byers being "gay-bashed" by her brother and the subsequent torment and disappointment that ensue -- our entire staff sends out an appropriate hug for Byers.  As a brother who cherishes the ground his sisters walk on I've also sent out our entirely inappropriate Poetry Hit Squad searching for Byers brother.  Not to worry, they only use poetry. They'll poeticize him to reason, tolerance and compassion or they'll dance him outside.

Joppa, Tarocco, Cara Cara, Sanguinello.
A hybrid between mandarin and pomello,
oranges grow near the Blood River in Limpopo,
alongside the ungraded dirt road, where the runners train,
barefoot, through the bush
in the red/orange co-mingle of sunrise,
in the descending crescendo of sunset.

After she shattered the 800 metre world record in Berlin,
Caster Semenya, of Limpopo, breathtakingly butch,
was accused of being a man,
jeered by the sixth and eighth place runners.
Deep voice, chiseled deltoids and biceps,
she visited the bathroom with competitors,
to show them her labia, again and again.

Her auntie says she knows what Caster is. she changed her nappies.
Turns out how we measure gender is complex.
No menses, not a big deal,
few female athletes bleed.
There is no definitive test.

She finds out she is intersex.
Undescended testes.
Mosiac female.

Caster retains the world record that she broke that night,
after the freak-show coverage and gender verification testing.
Hormone therapy renders her armour-like chest more curved,
her cheeks less angular, attenuated her power,
until we believe she is female.
Semenya goes on to win Olympic bronze, then gold.

Forget what you know.
Limpopo is South African slang for nowhere.

Imagine the dismay when you split one in half.
Red.
No, orange.
No, red.
There will be blood.

Byers poems are a magnificent bridge that span the years from imperilled hostility and even imprisonment for any LGBTQ citizen, through the marching and the parades, the hidden clubs and hidden desires - right up to today and the marvelous imperfect present.  Steps have been made, there has been progress, new laws, but we are all still a long way from home.

Acquired Community is not only a fine book of poetry it is a necessary piece of social history, a reminder, an entreaty.  Hope.

ABOUT THE AUTHOR
Jane Byers lives with her wife and two children in Nelson, British Columbia. She writes about human resilience in the context of raising children, lesbian and gay issues, and health and safety in the workplace. She has worked as an ergonomist and vocational rehabilitation consultant for many years and is passionate about facilitating resilience in ill and injured workers. She has had poems, essays and short fiction published in a variety of books and literary magazines in Canada, the US, and the UK, including Grain, Rattle, Descant, the Antigonish Review, the Canadian Journal of Hockey Literature, Our Times, Poetry in Transit and Best Canadian Poetry 2014. Her first book of poetry, Steeling Effects, was published by Caitlin Press in 2014. Her latest book of poetry is Acquired Community.

BLURBS
“Byers’ poems are an important reflection on the devastation of the AIDS crisis, the ‘veiled love and lament’ of the early gay rights movement, and the memories held by queer elders.”
— Leah Horlick, author of For Your Own Good and winner of the 2016 Dayne Ogilvie Prize

“Jane Byers’ Acquired Community fills an often overlooked niche in Canadian queer history. Written in strong, careful poetics, both personal and political, Byers gives readers a glimpse into what was possible then, what is possible now. If you care about queer lives, this is an important book to read, to enjoy!”
—Arleen Paré, author of Lake of Two Mountains (Winner of the 2014 Governor General’s Award             for Poetry), and He Leaves His Face in the Funeral Car