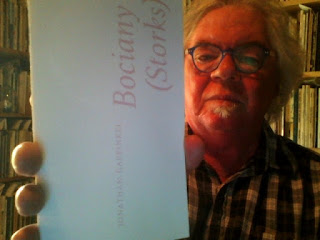 (Two things about this photo - our apologies to Jonathan Garfinkel,
this was the best we could do and it is a sorry attempt.  Milo, our
head tech, was on holiday today.  Secondly, Bociany (Storks),
is a smart and tidy looking book, contrary to our photo.

Jonathan Garfinkel has that thing, we all want to see it in a poem, magic.  And I bet he has it in his plays as well.  This type of certainty isn't random.

One of the short gems from this golden jewel is titled "Ornithology."  Ornithology is the study of birds and Garfinkel flights his poems with plenty of aviators.  But Today's book of poetry couldn't help but think of the Charlie Parker song/anthem/call to prayer "Ornithology" and all of the flying it has inspired.  Garfinkel's study is a poem that takes the same imaginative leaps of faith as Charlie Parker, he gives these poems wings.

I light a fire. Put on the coffee.
The radio struggles.
Wearing only a white towel,
'Molting,' you promise.

See no change. remember
your father beat you
to the punch. He wanted
to drive out the birds
from beneath.

We make love in the corridor
The station clearer.

A grey jay studies its reflection
moments before hitting the window.

The storks are a good omen in Polish folklore and Garfinkel uses them and others flights of fancy as he is looking for silver linings when he looks to the cloudy sky.  Today's book of poetry sees little but gold in Bociany (Storks).  Jonathan Garfinkel takes us all over the world with his traveller's knowledge, with his knowing he reaches for the sky, every bird wants to eventually soar, but Garfinkel remains grounded every time out.  This is fancy cooking.

Just to be clear, Today's book of poetry is convinced Bociany (Storks) is a remarkable publication.  These poems are built of strong, solid stuff.  This is a kitchen that burns.

The taut-faced crowd waits to board.
Too little food, too much prayer. One line
becomes four, a sniper takes aim.
Then the trampling and the panic.
I think of Forest Hill, tree-lined streets.
the multitudes of Mercedes
docked at the synagogue.
Rich women kvetch over lattes
too much foam, not enough heat.
Somewhere in their grief, a prayer.
Calling us: All aboard. The captain
whittles the air with his bamboo stick.
'Back,' he screams. We press forward,
teeter toward India.
The clouds full of hidden maps.
The White Nuclear Night.
Women in black burqas dart
to and fro, children
yelp in terror or delight.
The ferry swings towards the lights.

Today's book of poetry came away from Bociany (Storks) full of admiration for Jonathan Garfinkel.  We think in another life he may have been a watchmaker.  His poems are finely crafted, wheels inside wheels, all in perfect motion, one concentrated motion, every elaboration fitted precisely, every essential puzzle piece dropping into place as though nature intended it.

It's Sunday morning and the Today's book of poetry offices are a tad quieter than usual.  Everyone is here, except Milo, but few are vocal.  The morning reading was followed by several orders for jet-black coffee as the peons scurried back to their poetry-hidey-holes.

All humour aside, Today's book of poetry is a new convert, we're in for every word Garfinkel cares to utter.  We loved Bociany (Storks), what can we say?  The only fault was its brevity, we wanted more and more and more.

The soul is not a stone
to carve into.
But we take care of the world.
Bridges, gardens, mending.

Of all his jewelry I loved it most.
Light, elegant, a square face
with gold hands.
The watch repairman pried

the case back to show me
dust and moisture seeped into the crown.
Microscopic footprints,
a corroded mechanics, lunar.

When I was a child
I curled into his body.
Seconds that made so much noise.
Time, like love, wanting.

Today's book of poetry apologizes for our recent absence from the scene, we were filling up our tanks in Quebec.  We visited the Abbaye De Saint-Beniot-Du-Lac where a cluster of Benedictine monks live in silence but sing during their services.  We were lucky enough to hear some of this beautiful chanting.  Nothing like a little perspective to help set the mind straight.

We also bought some cider and cheese, those Benedictine's are industrious.

Jonathan Garfinkel's Bociany (Storks) went down like untapped spring water directly from the source.  Today's book of poetry could not get enough of it.

ABOUT THE AUTHOR
Jonathan is an award-winning poet, playwright and prose writer. His genre-bending work bridges the personal and the political, and is often inspired by his travels to far-flung, dangerous places, with an eye toward the humourous and absurd. He is the author of the book of poetry Glass Psalms. His plays have been produced across Canada and Germany and include The Trials of John Demjanjuk: A Holocaust Cabaret, and the 2011 Governor General's nominated House of Many Tongues. His award winning non-fiction has appeared in Walrus, Tablet, PEN International, 18 Bridges and the Globe and Mail, as well as Cabin Fever: An Anthology of the Best New Canadian Non-Fiction. His memoir Ambivalence: Crossing the Israel/Palestine Divide, was published to critical acclaim in five countries. In March 2016 his theatrical adaptation of the novel Cockroach by Rawi Hage will premiere in Calgary at Alberta Theatre Projects. Jonathan teaches creative writing at the National Theatre School of Canada.

We here at TBOP are technically deficient and rely on our bashful Milo to fix everything.  We received notice from Google that we were using "cookies"
and that for our readers in Europe there had to be notification of the use of those "cookies.  Please be aware that TBOP may employ the use of some"cookies" (whatever they are) and you should take that into consideration