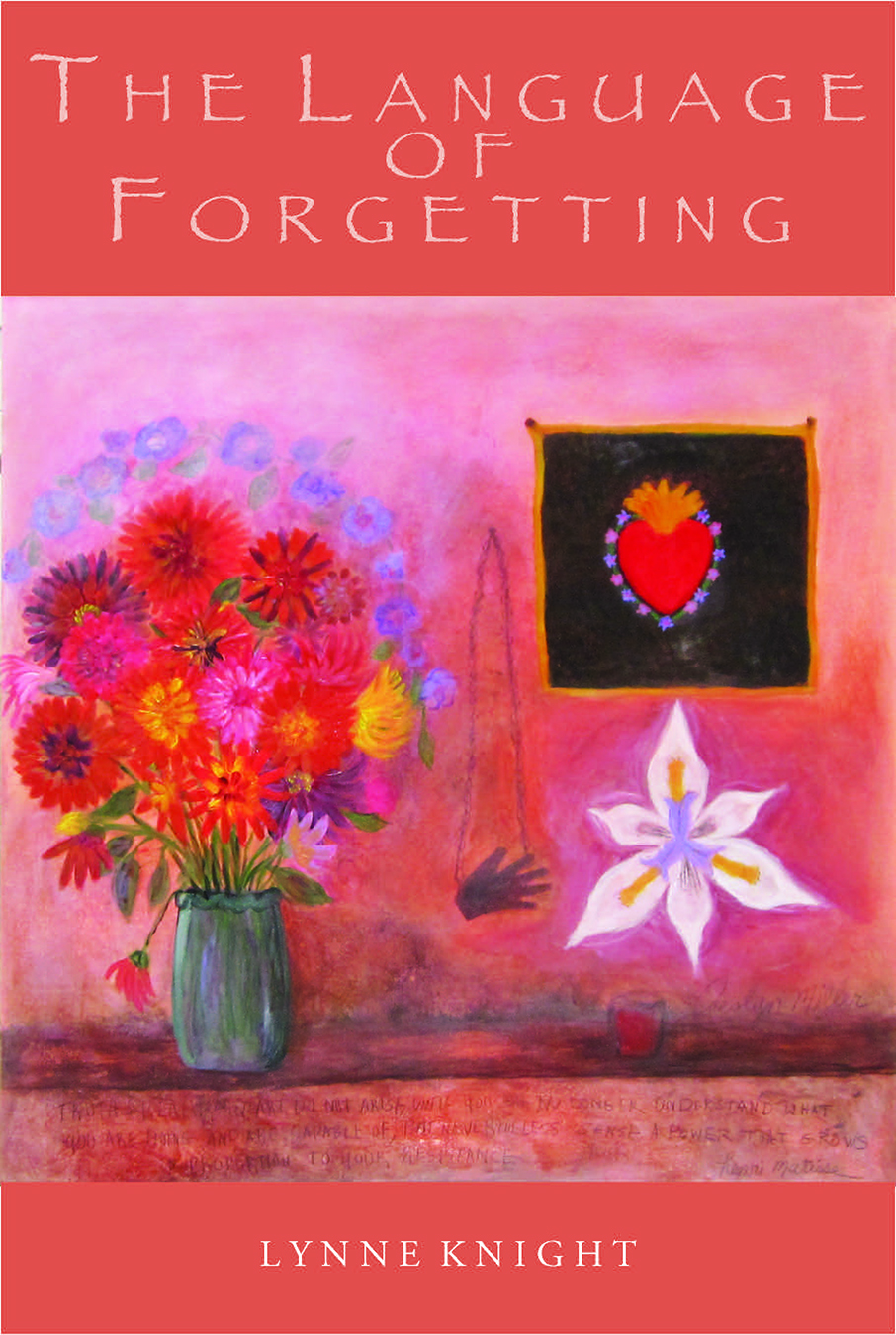 The Language of Forgetting is the second book by Lynne Knight that Today's book of poetry has had the pleasure of introducing to our loyal readers.  Back in January of 2017 today's book of poetry wrote about Knight's The Persistence of Longing (Terrapin Books, 2016).  You can read about that here:

In The Language of Forgetting Lynne Knight gives us four distinct groupings of her poems.  In the first of these the trauma and tedium of an alcoholic father, bellicose with grand dreams but never able to manage the climb out of the bottle, haunts Knight's childhood.  In another section of poems Knight bares witness, watches slowly while her mother loses her mind.  Knight wrestles with the relationship she has with her mother, the relationships she has with her sister, with the past and so on.

Closing out this ferocious gathering of formidable poems, in the fourth part of The Language of Feeling, Lynne Knight trods happier geography, losing herself in the canvases and intrigues of great painters, great paintings, and an almost pastoral beauty.

I was one of the black-hearted ones, my father said,
a Protestant whom they would try to proselytize,
thumping his dictionary like the Bible it was
to him, warning me not to be seduced by the robes
and glories, the incense and beautiful words.
But the gold and smoke, the brocade the murmurs
as penitents knocked at their hearts to open
the door to mercy, forgiveness—who could resist
such pageantry? The chapel walls were painted mauve,
and during Lent, with all the saints and the Virgin
draped in purple cloth, it seemed some elaborate
fashion show was about to begin. Heretical
to think, my father said. No doubt the nuns saw
my dereliction [more thumping] and were contriving
immediate conversion. I was not to let my guard down.

But God was my guard, and the hosts of angels
ready to descend and save my wayward soul,
I would think on my way to school, bantering
like a normal girl on the five-mile bus ride,
but all the while thinking this might be the day
the chapel wall opened and Christ stepped through
in a blaze of light to save me, and everybody
would see, and fame would come, and the dirt
floor under the sofa where I sat while my father
explained the world would vanish into carpet
walls, heat: the finished house of my father.

But my father's house was all words. Make a bed
of words to lie down in. Make a floor of words
to stand on. Make a faith of words that nothing
would betray—not his drunken promises,
not his blueprints untouched under ash and dust.
Make a hope of words, the start of forgiving.

Knight knows how to pull the line tight, wring out the water.  Her memory may be eidetic.  Each and every detail dovetailed and polished until the truth gleams.  The reader is quenched and then curious again as The Language of Forgetting reveals that it is all about memory.

As my mother lost more of her mind, shame
stood at the door like a beggar or prince:
she couldn't distinguish. She knew only Hide.
So she hid, turning her face into a mask,
shoved her hearing aid into a sock shoved
far back in a drawer, burying her leg brace
under fallen skirts in her overcrowded closet.
Those thieves, she said from behind the mask
while I searched for the hearing aid, brace.

Then disdain fled with the crows she'd seen
on the counter when she went to make her lunch.
You don't make your own lunch, I would say. You go
to the dining room. She sat: scared rabbit mask, now.
Don't let it hurt me! her shallow breath pleaded,
though she made no sound approaching words.

I pretend none of this was happening to her.
To me. Then one day I came to visit and opened
the door to the stink of shit. In the night
she'd had an attack of diarrhea but couldn't find
the bathroom. She'd run everywhere, hunting.

It's all right, I said after cleaning the mess,
bathing her. It's all right. I was tying her
shoes, kneeling before her. She leaned close.
In the two or three seconds she was herself again,
she whispered, Liar. So I saw what I owed her.
Shame, whether beggar or prince, had no claim
to her door. What was happening to her could be
happening to anyone. And was. And is.

Today's book of poetry would like to take this opportunity to thank Nick Hesslier and Tina St. John for hosting a reading for me and Deanne Young in their home last weekend.  Their home in Vanier lends itself so comfortably to both the reader and the audience.  Reading to a crowd in a private home lends a different sort of intimacy to both the poem and the audience.  The very warm response Deanna and I received was enough to restore ones faith in the power of poetry.  Nick and Tina made us and everyone else feel at home and I can't thank them enough.

One more sidebar.  Today's book of poetry (me, Michael Dennis), just finished a project many years in the making.  Today's book of poetry joined forces with the most excellent Stuart Ross and after several meetings over several years we finally finished our manuscript 70 Kippers.  We took turns writing the lines and the result is dangerous whimsy.   Any publisher interested in seeing the manuscript can contact either Stuart Ross of Michael Dennis through this blog.

Back to Ms. Knight.  Today's book of poetry is happy to have an encore performance by Lynne Knight.  She has heart, her poems are clean and ring true.  That combination is always going to produce fine poems.  The poems in both of Knight's books that Today's book of poetry has read are instantly engaging, inviting even.  Knight doesn't speak down to the reader, but looks the reader right in the eye.

Just to say the words, sundrenched barn,
makes me long for those summers when
all we did was be young, untroubled
by identity, the body just the body
the way the barn was just the barn,
forbidden because it might combust
those hot July days when we climbed in
anyway through the small back window
to leap and leap into the choking hay.
But I don't want to reproduce my story.
It's anybody's barn. It's almost on fire,
the sun's so bright, like the body
walking a country road, the orchard
sweet with fruit, the barn rising suddenly
on the horizon, a second sun, and night
nowhere to be seen—the whole idea
of dark so beautifully, hotly impossible.

Today's book of poetry is looking for some new staff and are open to suggestions.  All we do all day is lounge around and read poetry, argue about poetry, read some more.

Lynne Knight is getting to be a known name around these parts and for all the right reasons.  The Language of Forgetting will taunt, tickle and torment.  Perfect.

ABOUT THE AUTHOR
Lynne Knight’s previous collections are Dissolving Borders (Quarterly Review of Literature), The Book of Common Betrayals (Bear Star Press), and Night in the Shape of a Mirror (David Robert Books) and The Persistence of Longing (Terrapin Press, 2016), plus three award-winning chapbooks. Her cycle of poems on Impressionist winter paintings, Snow Effects (Small Poetry Press), has been translated into French by Nicole Courtet. Knight’s work has appeared in Best American Poetry 2000, and her awards include a Theodore Roethke Award from Poetry Northwest, a Lucille Medwick Memorial Award from the Poetry Society of America, and an NEA grant.

BLURBS
Lynne Knight’s mindful, lyrical book reads like a heart-and-soul video, Season One. Her poetry thrills and intrigues, warns and shares, always in language that catches.

The Language of Forgetting is inspired by a fascination with the accumulated secrets lying under the many stories of a lived life. This is thriving, memorable poetry.
—Forrest Hamer