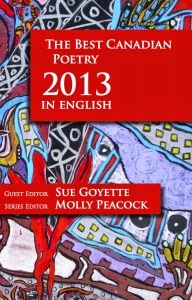 When Sue Goyette speaks you should listen.

She is one of the best poets on the planet.  If she's editing it, I am going to read it.

In general, anthologies are not my cup of tea, but that is my own bias, Goyette and Peacock have rewards in store for the reader.

Here is a gem from one of strongest young voices in the country, you probably haven't heard of Ben Ladouceur, but you will...

Ben Ladouceur
I Am In Love With Your Brother

Richie made me promise not to relate any stories of
embarrassment or crime, but Richie, on
this, the evening of your nuptials, I must tell them about
our long day in Truro, I just must, the fallacy then
was a dark twin of tonight's fallacy, we
and the dogs—who are thought to be clairvoyant
on these matters—anticipated storms
that never came, and here we are now, beneath
a tarpaulin, on an evening they reported
would be clear and ideal for regattas.

As Truro woke, as birds of Truro wailed
morning song, Rickie came across my notebook, open
to its core, where read these simple words:
I AM IN LOVE WITH YOUR BROTHER.
That first line, I insisted, of a song I'd been arranging
to be played on the Wurlitzer, though now I
come clean, Richie, while your soul is at its smoothest
and most forgiving, I did love him, the crimson acne
flecked across his neck, he was like a man
a guillotine had made an attempt at and failed.

We rolled that whole notebook into joints, didn't we
Richie, then drove into the boonies to shove ammo
into rifles folk left by their porch
doors. That summer, your brother's motorboat
slipped into the Irish Sea, his mannequin body
demolished, and I'll bet he is here now, and is
glad, I will bet, I am sure of this. Caroline, Richie
is one hell of a guy. You would do your best to keep
his body firmly in yours, how seas contain boats, how
trees contain birds, for he is only stories to me now.

It doesn't hurt an anthology to pepper it with giants either.  I shared a drink with Patrick Lane in a Peterborough lounge almost forty years ago.  Memory plays funny tricks but I am almost certain Richard Harrison was there as well.  We were the young poets begging scraps, Mr. Lane was patient and kind.

Patrick Lane
The Ecstasy of No

He told his wife he lived in the ecstasy of no
and she told him to write that down. The last
he saw was her going into the airport, brightly.
Home, he digs at dawn in the garden, turning
the old earth, giving its buried face to the sun.
Around his neck is the new timer on a cord,
the bread in the stove waiting for its ring.
The noise reminds him he is old, the tic, tic, tic,
an ant tap-dancing on his chest.
His wife is afraid he will burn the house down.
Some days he wants to burn his new poems.
He thinks he will return to the kitchen, and then
tries to resist when the timer rings.
In this he resembles the aging fighter who tries
to avoid the blows by hanging onto the ropes.
It is a terrible wanting, this being alive.

Patrick Lane is one of our very best poets and he shows it every time out.  It's not just the poet who is on trial in every book of poems—the reader is being judged as well.  Patrick Lane asks that you bring your A-game.

Here is the list of poets selected by a cagey Goyette for this anthology:

If this blog has shown/taught me anything — it is that there is a rich pool of Canadian poetry as big and diverse as our country itself.  The best any anthology can do is to provide a pinch of salt to the feast. Sue Goyette and Molly Peacock have certainly given us a tasty sample of the best of Canadian poetry in English.

Sarah Yi-Mei Tsiang is a poet I will always have a lot of time for and I was thrilled to see her included in this collection.  The best thing about anthologies, in my mind, is that they do introduce voices to the discussion that many readers might have missed.   Tsiang could have slipped by your notice, but you will hear about in the future.

I saw my father yesterday,
Sitting on the wall of his mausoleum.
He held my hand and told me he forgave me
and I asked, what for?

He smelled of apples, an autumn of leaves
for skin. I remember you like this, I said,
a harvest—an orchard of a man.

He opened his shirt, plucked a plum
from his lungs and held it out to me.
Everything, he said, is a way of remembering.

That's the nature of anthologies, some golden oldies, new hits for the charts, an olio for perusal.  The Best Canadian Poetry in English 2013 surveys the Canadian stream and finds it verdant and splendid.

ABOUT THE GUEST EDITOR
Sue Goyette is the author of the poetry collections Ocean, Outskirts, The True Names of Birds, and Undone as well as the novel Lures. She won the 2008 CBC Literary Prize for Poetry, the 2010 Earle Birney Prize, the 2011 Bliss Carman Award, the 2012 Pat Lowther Award, and the 2012 Atlantic Poetry Prize. She teaches in the creative writing program at Dalhousie University and lives in Halifax, Nova Scotia.

ABOUT THE SERIES EDITOR
Molly Peacock is a widely anthologized poet and creative nonfiction writer. Her latest work of nonfiction is The Paper Garden: Mrs. Delany Begins Her Life’s Work at 72, and her most recent collection of poetry is The Second Blush. A contributing editor of the Literary Review of Canada, she inaugurated The Best Canadian Poetry in Englishin 2008 and continues to serve as the series editor. She lives in Toronto.

COVER BLURBS
"A big, full flavor on each and every page of this satisfying anthology."
—Lori A. May, Poets' Quarterly

"An excellent book for the academic and the casual poetry fan..."
—Michael Peckham, Broken Pencil

"A magnet, I think, for the many people who would like to know contemporary poetry."
—A.F. Moritz, Griffin Poetry Prize winner