It Isn't What You Would Think

It isn't what you would think,
divine power.

It is much more like
powerlessness than you would think

or at least that you could
say, or could utter or

give utterance to.
That's where "weakness" comes in

useful, as a kingdom word. It describes a state
we always think we want out of

which is one of the conundrums
the kingdom poses.

It puts up two doors: the Weak
Door and the Strong Door

and most of us are for the Strong.
Empowerment:

such a powerful word. The French
have taken it over without remainder.

But the Strong leads
to the Strongbox. It's the Weak
that opens onto the kingdom.

The Kingdom is not a mighty fortress
except inasmuch as

a fallow field of daisies and wild grasses
is a mighty fortress.

Heaven doesn't seek to trick us.
It wants to be sure we get what we want.

It's our choice, to the uttermost.
Ours is the only power there is.

Today's book of poetry thought these poems were absolutely fearless and sometimes ferocious.

Many of these poems read like stories we already know, anecdotes passed down from one wise voice to another, common knowledge wisdom sagely reported.

You don't have to know that Anderson is an Anglican priest to feel the presence of the Church in these poems.

I personally usually find a way to shy away from most work too closely affiliated with any specific dogma.  With Mia Anderson's Light Takes, Anderson took it out of my hands.  These poems work, work, work.  I'm not a Christian and it certainly didn't seem to matter, I enjoyed these poems for the fine poems they are.

Like Maggie Helwig, another Anglican priest who happens to be an excellent poet, Mia Anderson is far too smart, her world view far too broad and encompassing to be hampered by any particular label.

We are premature babies.
The world is our neo-natal ward

in which we are entirely dependent
before we know we are,

in which we are required always
to live beside something

larger than us. And that is
as it should be.

Rebirth is the divine template.
But some of us aren't good at it.

When we've come of age
or like to think we have, we

don't think much of that neo-natal
ward, we hold it in low esteem

even cities do not remind us
that anything is larger than us.

This fleuve here does it, and
I know of a woman

the doors of perception
as they did for her

and on as far as the mind can feel,
the eye seeing, the heart beating

but bigger than us.

We have to learn this.
This is the view from the pram.

Mia Anderson's Light Takes is fecund with religious scholarship, literary as well.  But those are different conversations.  In this conversation Today's book of poetry wants the reader to know how Anderson's riffs on the purpose of jobs and employment, the emotional attitude of water, and so on... left us wanting more of this particular type of wisdom.

Anderson does not proselytize.  She swims in some awfully deep and heavy water and distills this into navigable terrain, smart showers.

Today's book of poetry thought these were elegant and eloquent poems.  Kinetic when Anderson wanted them to be, literally pulsating with sustained and intense intelligence.

Some poems just squat
and hold to one place.
That's them shitting.

Some waft in the air
all moonbeamy-dreamy
ethereal charm --
Tinkerbell flimsies.

Some go fast,
go far and hard
pulling a lot of luggage:
sled-dogs in their prime
winning the Iditarod.

others, with such joy of speed
they reach their target before
the arrow they've loosed, like
the folk hero getting it in the behind.

And they don't mind,
those poems, they don't mind.
Some trudge through snow
surviving all odds, putting one fricative in front
of the other. They
make it to the cabin before the cold
can take them and drape them over the last
fence but one.

They make it home
and home welcomes them.

They're the ones
who by staying soar.
There goes their arrow of desire

which travels everywhere,
as long as it's aimed at
one place only. 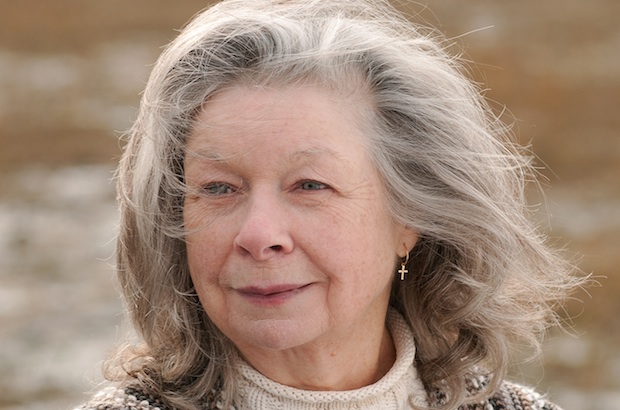 ABOUT THE AUTHOR
MIA ANDERSON lives outside Québec City with her husband. She was for many years an actor, then a shepherd and grower, then an Anglican priest in Québec City. Her theatre career included the Stratford Festival, CBC, Theatre Plus, MTC, Centaur, Manchester Library, the Royal Shakespeare Co. and the Traverse, Edinburgh. Her one-woman performance, 10 Women, 2 Men and a Moose, which toured nationally, showcased then-recent Canadian writers and presaged her own involvement in the writing life. Farming in Ontario she produced, as well as sheep, two Malahat ReviewLong Poem Award-winning poems, one of which also took a National Magazine Award gold. Anderson’s “The Antenna” won the Montreal International Poetry Prize 2013. Her last poetry collection, The Sunrise Liturgy, was shortlisted for the 2013 A.M. Klein Prize for Poetry.