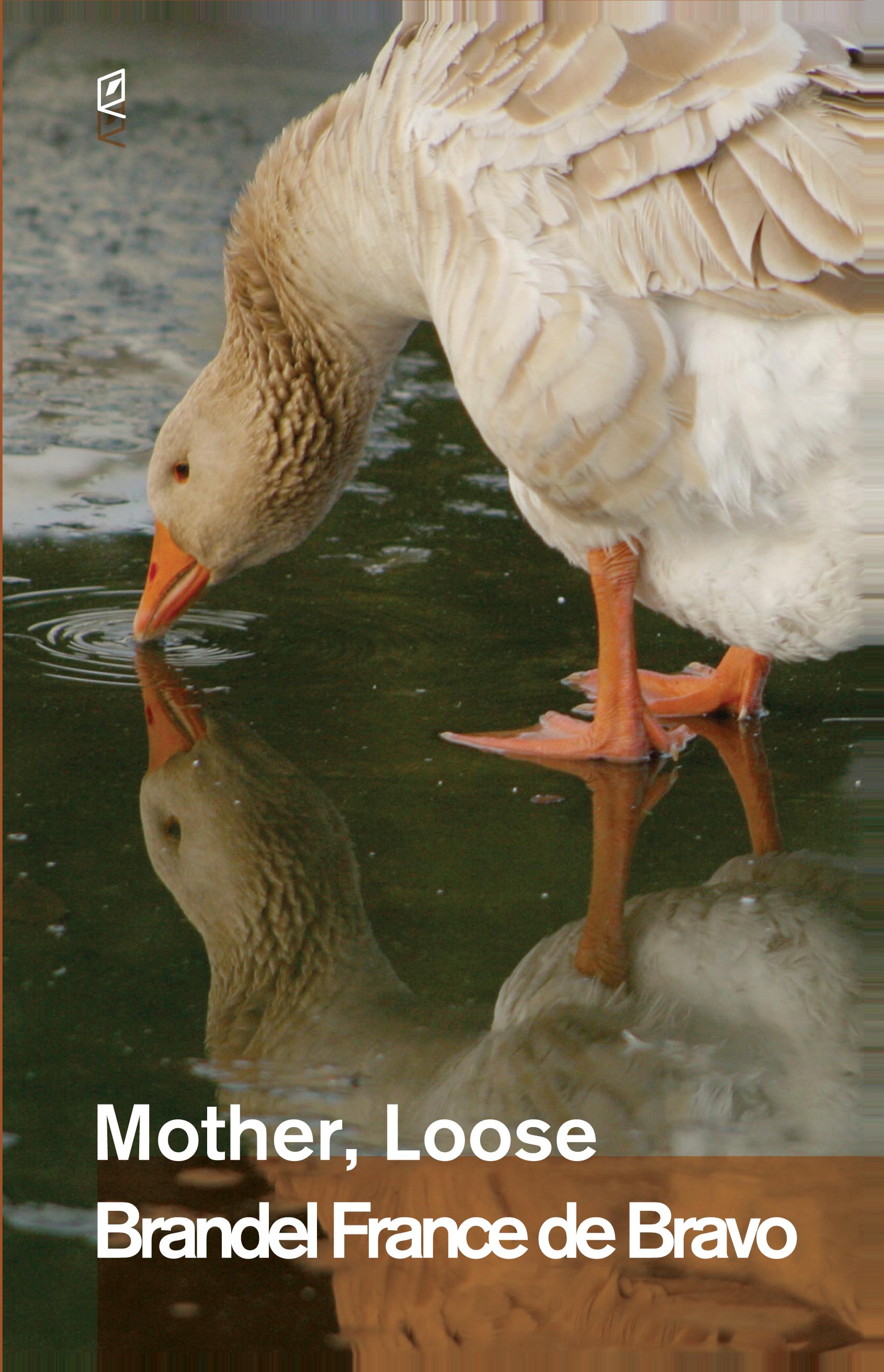 Brandel France de Bravo is Mother Goose for our new age.  Every one of the poems in Mother, Loose is worthy of keen attention.

de Bravo reinvents the world we used to know by welcoming in the reader with familiar and open arms, cookies in the oven, a warm fire in the hearth.  Then she lowers her excellent boom.

A Perfect Sacrifice (still it lingered near)

Spring had come and the pear trees, sheared of their white
blossoms, were flaunting new green skin. Mary decided to skip
school. She called the lamb and told her to meet at Nail-like-
Gnu. The Vietnamese lady pumiced Mary's heels and snipped
at the lamb's cuticles. Mary and the lamb picked "Teat Peach"
polish and flip-flopped out the door, cotton puffs between their
toes. The security guard at Victoria's Secret said lambs were not
allowed so Mary went in alone. She came out a few minutes later
carrying a big pink shopping bag, two thongs inside. At the Food
Court they got diet sodas and headed to Mary's house because
her parents were at work. "Let's try on each other's clothes," said
Mary. "Awesome," said the lamb. Mary wrapped herself in the
lamb's fleece. "God, it's so warm." The lamb put on Mary's plaid
kilt, navy sweater, and knee socks. "I'm gonna follow the rules
now," the lamb giggled, giving a little salute. Mary looked at the
lamb, and a current ran through her, more powerful than the
sight of Nick's number pulsing on her cell phone. It was like the
thread-pull between her legs whenever Nick's breath filled her
ear. Only, the hollow feeling was in her stomach and spreading
to every part of her. The fleece slid from Mary's shoulders. She
touched her mouth, saliva gathering at the corners. It was a maw.

de Bravo's ability to know exactly what a knife might say alone in the dark late at night might be unsettling for some.  For us, here at Today's book of poetry, it is what we live for, it augured great things.

These poems are mostly playful until you realize they are not playful at all.  de Bravo is one tough nut, a champion wit with a sense of humour like a good dry red.  She is relentless.

He looked like six o'clock
and she the face.
Together they were bacon
--sinew and glisten--
and called a platter home.
She licked the welcome mat.
He licked the light switches.
She licked his arm chair.
He licked her vanity.
One day, in the pantry,
their tongues met
and they knew salty-sweet,
felt time running in place.
Afterwards, Jack lit a cigarette.

The rest is a blur, like glass
smeared with butter.
Jack remembers fetching his pail.
He remembers the whoosh and flash,
spitting heat, and his mother's words.
Never throw water on a grease fire.

Today's book of poetry would borrow a phrase from the great Canadian poet David McFadden and tell you that these are "Poems Worth Knowing."

de Bravo isn't afraid of saying the harsh, hard, real thing and that is always worth reading.

Some of these poems sing - literally.   Brandel France de Bravo carves nursery rhymes out of slightly different timber, they are of a different contour, she speaks in a language all her own using a vocabulary we already know.  We recognize it right away.

This is how people speak when they are leading the way.

In The Arms of Morpheus II

It's not enough,
she insists.
a whole unopened bottle
is not enough.
Are you in pain?
No, no, she says,
irritation in her voice.
Not enough
to put an end
to this

Her last dose two days
ago, the black gnats
in each iris turned fat flies,
she doesn't look at me,
only a spot on the ceiling,
a driver reading the road
signs, afraid to miss the exit.

de Bravo sure has mastered the big punch in the head with the velvet gloved fist.  Mother, Loose is powerful stuff, playful and unflagging, full of mystic wisdom and sartorial memoir.  It's all in here and doled out like candy in easily digestible future tales of lore.

ABOUT THE AUTHOR
Brandel France de Bravo is the author of Provenance, which won the 2008Washington Writers’ Publishing House prize in poetry and was a ForeWord Book of the Year finalist. Her poems, which have been nominated for thePushcart Prize and Best of the Net, and essays have appeared in various journals, including Alaska Quarterly Review, The Cincinnati Review, Fairy Tale Review,Gulf Coast, and Seneca Review. She is co-author of Trees Make the Best Mobiles: Simple Ways to Raise your Child in a Complex World and the editor of Mexican Poetry Today: 20/20 Voices. A graduate of the MFA Program for Writers at Warren Wilson College with a master’s in public health, she works for a consumer health organization in Washington, D.C.

BLURB
Full of ripe, aching music, Brandel France de Bravo’s MOTHER, LOOSE captures the overlap between what we chant as comfort and what we choose as elegy. Nursery rhymes become impishly twisted: “Social climber,/ they called me,” Humpty Dumpty admits, while Mary and her lamb pick out “Teat Peach” polish to get their nails done. But another mother hovers, her “dry cough flowering” into malignancy, and a walk beneath the about-to-bloom cherry trees of DC becomes a bittersweet recognition of “Resurgence…as after / dormancy, remission, as after a sleep / we knew we would wake from.” Deft and heartbreaking, these poems ask us to step out from under the sheltering wing of Mama Goose, and into the arms of Morpheus. Let this collection cradle your heart in its hand.
~Sandra Beasley, author of I WAS THE JUKEBOX and COUNT THE WAVES