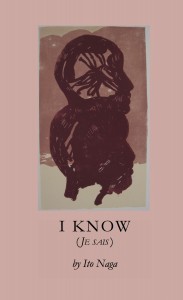 31.  I know that, unlike human beings, trees don't
heal their wounds. They grow around them,
leaving holes here and there.

(Today's book of poetry apologizes profusely for being unable to use the proper accents when reproducing French text.  I can only offer up that I am old and a moron.)
...

Originally published in France in 2006 under the title Je sais (Cheyne editeur), Ito Naga's I Know has lost none of its vitality in the ensuing decade.  Je sais is currently in its seventh edition in France but it is new to us.

I Know is made up of 469 short aphorisms, no titles, numbered, each one sentence long.  We could call them truisms.  An aphorism can be defined as "a concise statement of a scientific principal, typically by an ancient classical author."  As it turns out Naga is a scientist, an acclaimed astrophysicist, Ito Naga is a nom de plume.

Nom de plume or not any cat who ruminates about Yukio Mishima, Antonin Artaud and Marco Polo has my curious attention.

210.  I know that if I were a mailman, I wouldn't be
able to stop myself from reading postcards.

Naga's fierce noggin' never stops.  He is constantly interested in what is at the edge of the frame, the figure in the shadow that gives the entire thing meaning.

Ito Naga makes a point of tipping his hat to Joe Brainard's I Remember, he even draws a hopeful comparison.  Now this should make my dear friend Stuart Ross flip - Ron Padgett wrote a memoir about his childhood friend Brainard called Joe.  I Know is full of much of the same hopeful naivete that Brainard is known for but never at the loss of real life, real experience, understanding.

241.  "I know that for thirty-five years, my hands
have been working but my brain's been at a
standstill," someone leaning on the counter said.

I Know is an inventory of the everyday from the perspective of a generous mind that misses nothing. The world from sun-up to sun-down and all night long, Naga is on the job deconstructing and explaining all these things we know and need to be true.  He has a generous heart.

468.  I know that, urged to confess that he had lied,
Marco Polo answered that he hadn't told even
half of what he'd seen on his journeys.

And like Marco Polo on his death bed with plenty of tales yet to tell - I am certain that I Know only scratches the surface of Naga's deep well.

Today's book of poetry has always had a soft spot for "list" poems and this is assuredly one of the best.  Joe Brainard would like this book.  I'm pretty sure Ron Padgett would like it.  I'm hoping Stuart Ross will like it.

I Know was translated by the poet Lynne Knight, Today's book of poetry will be looking at her excellent book of poetry, Again (Sixteen Rivers Press), in the near future.

ABOUT THE AUTHOR
Ito Naga is the nom de plume of a prominent French astrophysicist living in Paris. He is the author of three books, all published in France by Cheyne éditeur: NGC 224 (2013); Iro mo ka mo, la couleur et le parfum (2010), now in its third printing; and Je sais (2006), now in its seventh printing. He also contributes regularly to the Italian journal Sud.

We here at TBOP are technically deficient and rely on our bashful Milo to fix everything.  We received notice from Google that we were using "cookies"
and that for our readers in Europe there had to be notification of the use of those "cookies.  Please be aware that TBOP may employ the use of some "cookies" (whatever they are) and you should take that into consideration.
Posted by Today's book of poetry at 7:14 AM