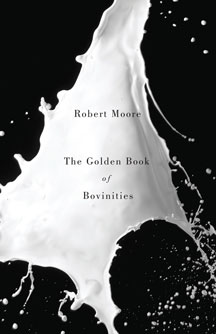 Drink up.  Because a glass of milk is never going to go down your throat in quite the same way again.
The Golden Book of Bovinities takes allegorical poetry to the stockyards, barns, cattle pens and meat trays, the domain of cows, and explains everything.

Not since Art Spiegelman's Maus has an animal acquired such a voice.

The Golden Book of Bovinities is several things at once.  The first thing you absorb is the rational voice of bovines, then you get caught up in cow world something fierce.

There is much seriousness afoot and ahoof.  Rarely do we find so much plain reason acquiring such gravitas and big belly laughs at the same time.

After you've been branded,
had the living horn sawn from your skull
and seen your little ones sold into confinement
and certain death, you start to think it couldn't get any worse.
But then, life comes along and hits you right between the eyes
with a bolt pistol.

Somehow Robert Moore has transcribed the unspeakable horrors we humans inflict on bovines and made poetry out of it.  That is one hell of a good trick.

Today's book of poetry guarantees that after you read The Golden Book of Bovinities the next hamburger or steak you encounter will talk back to you.

Bovinities is illustrated by Chris Lloyd.  Today's book of poetry is not a big fan of illustrations in poetry books.  But Chris Lloyd has rendered a mysterious parallel world that entirely makes sense in this cow context.  Another very good trick. These simple drawings are the perfect jewelry for this bovine extravagance.

The inventions for which cows are responsible
but for which they receive absolutely no credit include
the following: the fork, selective memory, human error,
the fuel gauge on a time machine, the ironically named
hearty breakfast, and Tuesday afternoons. And, oh yes:
the eye rolled back in abject terror.

Robert Moore has one hell of a dark sense of humour and we like that here.  He has also opened up an entirely new world of bovine history that illuminates all the questions cows want answered.

At our morning read everyone was on board, everyone wanted a turn and was delighted to read aloud. Even Milo cracked a smile.  Egads!  The Golden Book of Bovinities is a tidy little marvel.  From this day forward cattle have their Little Red Book, their Gideon's Bible.  Wit and bovine wisdom abound in herds, our misconceptions about cows foul the ground we trod upon.

Proof of reincarnation visits daily
in the form of scores of biting insects
who blithely assume your blood is theirs to take.

Being human must be a difficult habit to break.

They call where we're kept in barns a stall.
Good word. Pretty much says it all.

If a man ever approaches you from an oblique angle
carrying a sledgehammer, prepare to be absolutely
astounded.

Today's book of poetry will be MOOning about The Golden Book of Bovinities all day.

ABOUT THE AUTHOR
Robert Moore's previous books are So Rarely in Our Skins [2002], Museum Absconditum [2006] and Figuring Ground [Wolsak & Wynn,2009]. He has been a finalist for the Atlantic Poetry Prize and the ReLit Award. He lives in Saint John, New Brunswick.