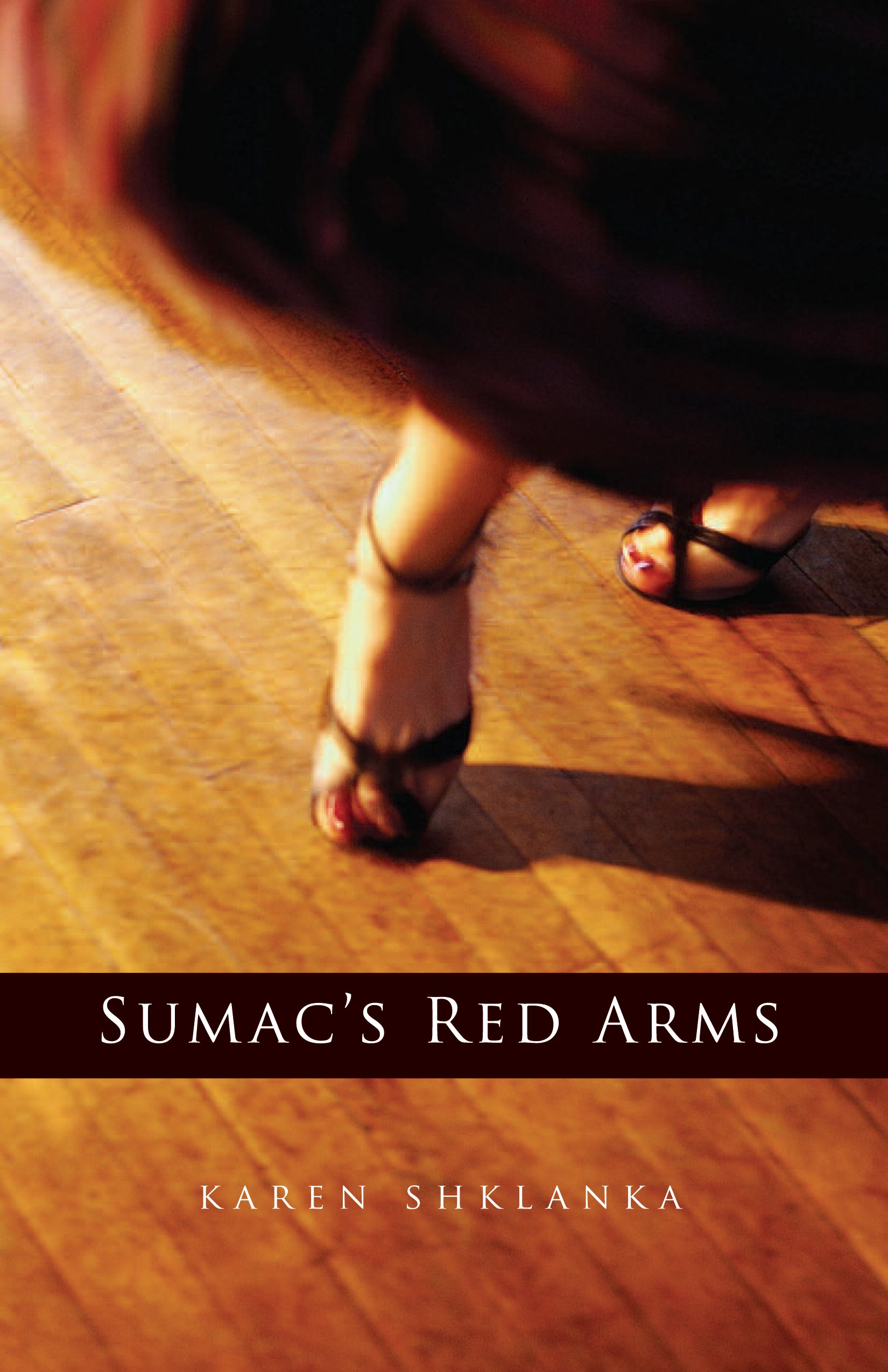 Karen Shklanka is a poet I could listen to all day long.  Nothing is as exciting as a voice filled with vibrant intelligence and wit.  She also happens to be a practicing physician.

The poems in Sumac's Red Arms are small movies worth watching.

Whether Shklanka is in an emergency room stitching scalps or dancing the tango as though her life depended on it Sumac's Red Arms stuns the reader with precision and clarity.  These poems charm the reader, if this is dancing, Shklanka is definitely the lead.

Milkweed pods empty themselves to the wind,
dry cups like grandmother's hands.
A child on the bank follows a yellow leaf underwater.
Sumac's red arms gather in the weather.
The river, larger than memory,
pours itself like clear tea through the ravine.

Today's book of poetry takes old school pleasure in the way Shklanka's narrative holds the reader by the scruff of the neck.  These poems are well traveled, the fruit they serve could be from anywhere.

Sumac's Red Arms  is broken up into several separately titled sections and each has some stylistic perk that make them unique but the voice never changes, Shklanka is constantly stone-cold certain. The lucky reader gets to see Shklanka's considerable skills spread out over several different palettes and she has a different gear for each other them.

I won't tell you
about how morning stretches
under the clouds on English Bay
like a bright skin, how
its edges blur tenderly into
the dark, how all moments
accordion into this one
where we touch a stranger's
fingers, how our steps echo
in the street, how you measure
this, the Pont Neuf, my stride,
how you read my back
with your hand, how my sidelong
thoughts slip by
the Seine, out of streets
of the Marais, sniff around you,
intercept a glance, a sudden
kiss before the inevitable
commutation, the door closing
and the gleaming train.

The gang in our office for the read this morning was larger than usual.  Milo and Kathryn both brought guests, they claim our morning read is better than Bugs Bunny or Oprah.  The office rule is that everyone has to read a poem and that included our guests.

One visitor read the entire "Vocabulary A Tango" section of Sumac's Red Arms.  The other guest, they both prefer to go unnamed, read two poems, "Dear God," and "Letter to Jesus."  Both were excellent reads.

From today forward, Today's book of poetry will be welcoming guests to our morning reading.  But if you show up - you HAVE to read.

The Girl From Attawapiskat

She is the fifth Friday night "Tylenol overdose" send from the
Attawapiskat nurses in six weeks. I am new to medicine, to the North,
still can't sleep night before being on-call. We chopper them down:
fifteen or sixteen years old, smooth skin, wary eyes. I never really know
what to do. There's no acetaminophen level. No proof. They get an IV
drip for the night, Mucomyst, then go shopping at the Northern store
the next day. There's not much for a teenager to do in Attawapiskat, a
reserve of a thousand people with their own Cree dialect. Once, we
made the rule, "No Shopping," and the weekend helicopter rides
stopped, for a while.

Another Saturday night, the girl from Attawapiskat again. An
"overdose." She refuses to stand, so I sit on the floor of the ER with her.
Her voice is quiet, not wanting to talk to me. She casts her eyes down. I
wait. Look at the scuffmarks on the floor.

She says she heard a voice in her head that gave orders. Kill yourself, the
voice says. This time, I know what to do. There is a psychiatric hospital in
North Bay. The psychiatrist can't refuse. The pilots flying patients to this
hospital insist they wear a straightjacket. We both cry as the orderlies
strap her in. She screams at the men. I stand in the stairwell by the
helicopter pad. She spits on me as they wheel her out on the stretcher.

Four months later the girl from Attawapiskat stops me on the road, as I
walk to the hospital. I hardly recognize her. She is pretty now. A bit
plumper. From the medication, I think. Not as quiet. Says she wants to
thank me for sending her to North Bay, that she'd been in
treatment for depression, sexual abuse. She appreciates me taking the
time. Plans to go and stay with her older sister in Fort Albany. I blush,
then release my breath; fight the tears in my eyes.

Six months later I get a call at 10 pm from the nurse in Fort Albany, one
community north from Moose Factory on James Bay. A thirty-five year
old woman has been in a gas explosion. From medical school, I know the
key question is, Does she have burns around her mouth? Yes? Then
check inside. Yes? Bits of Black? My mind is tight and clear.

I send the anesthetist up in the chopper in case of swelling of her airway,
then I fall asleep on the living room floor, a blanket over my shoulders,
my husband in the bedroom upstairs. The phones wakes me up at
midnight. I've been drooling. Don't know where I am. The nurse is
panicking. The chopper isn't there yet. The patient is choking.

I talk the nurse through a needle cricothyroidotomy. It doesn't work.
There's blood everywhere, she says. Get the bag and mask, oxygen,
I say, some air will get in. They hear the chopper. Hang up.

I can't sleep, call an hour later to see what's happened. She was barely
hanging in there when the doctor arrived, then she lost her IV. I'd asked
for two, but they'd only managed one, her veins were so shut down.
While they all tried to replace the IV, she stopped breathing, had a
cardiac arrest. The nurse says the woman's sister, the girl from
Attawapiskat, is waiting outside.

The feeling around the office was that we all wanted to see more of Karen Shklanka's very fine poetry.  Sumac's Red Arms was thoroughly entertaining when Shklanka was dancing, riveting and respectfully sublime every time there was blood on her hands.  Shklanka's prescriptions are disguised as poems.

This is great medicine. ABOUT THE AUTHOR
Karen Shklanka is a poet, a family physician and, with her husband, an Argentine Tango dance instructor. Her poetry was included in the 2004 chapbook anthology, Letters We Never Sent, edited by Patrick Lane. She was twice a finalist in ARC magazine's international poem contest, in 2005 and 2006, and has been published in numerous other literary periodicals. Sumac's Red Arms is her first book publication.

Born in Toronto, Karen Shklanka spent 18 years practicing rural and emergency medicine in small and medium-sized Canadian communities. She has lived in Vancouver, Australia, Regina, Houston, Los Angeles and Moose Factory, Ontario, and on Salt Spring Island. She received her M.D. in 1988, and, in 1990, received the top mark in Canada from the Canadian College of Family Physicians. She currently serves as a Clinical Instructor in the Faculty of Family Medicine at UBC.