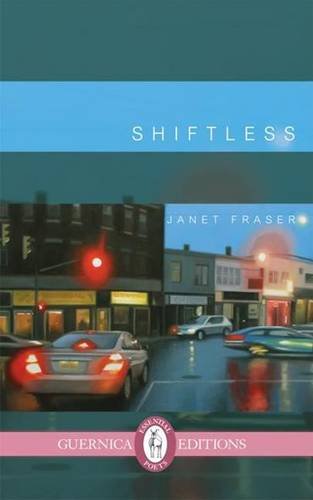 There is a stream of down-home consciousness, laissez faire that Today's book of poetry likes about Janet Fraser's poems in Shiftless.  These poems are like conversations Fraser is allowing us to overhear, the conversations that usually go on behind curtained windows.   Fraser will have none of that, she's kicking against the pricks with a public voice.

Shiftless could have been written by a character from an Alistair MacLeod story.  That's some solid.

On the terrace
of the Restaurant Fournaise,
one hatted lady,
one flower-crowned girl.
Red and blue colour blocks
foreground green strokes.
Local models, not related,
for Renoir's Two Sisters.

She sent me that print
when we were freshly married.
I hung it by the picture window
of my garden room,
the one I retreated to nights
my husband stayed out.
(I didn't know her man
was a runabout too.)

As I grew up Renoir goddesses
fearlessly stared down at me.
Their rosy flesh, lustrous tresses,
corseted abundant dresses,
brightened the silent rooms
of three melancholy femmes.
(Two sisters and their mother
waiting for life to begin.)

Today my sister and I
don't speak of Art, or Mom,
a shy, gaunt artist who retired
after we were born, choosing
not to be a hobbyist,
settling for the Renoirs
that lived in our house --
the framed lush ladies.

Sis, good with her hands,
teaches school crafts
but is unwilling to take her
own oils into the light.
Her house is crammed with
Mom's discarded paintings,
all the tasteful fabrics
and porcelain she craves.

She lives with her daughter
in a mauve Victorian cottage.
Summers I visit her statuary
and formal gardens.
We sit on her polished verandah,
admire golden wire birdcages,
talk flatly for a bit
about our lives' surfaces.

Janet Fraser illustrates the matter-of-factness of our grind towards that endless dirt nap but she does so with considerable aplomb.  We want to listen to her talk.  You get the feeling Fraser is a poet who you could sit with at the kitchen table and share conversation and a sip.

Only a woman could have written these poems.  That doesn't mean they are for women, just saying a man couldn't have come up with this stuff.

Today's book of poetry was intrigued by the title which is taken from a quote at the start of Fraser's Shiftless:

"It was my goal always to be shiftless
I saw the merit in that."
- Raymond Carver, "Shiftless"

There is nothing shiftless about Shiftless, sly and wise yes.

The Laws of Science

The trauma preacher
says fundamentally
hurt is one side
of a see-saw
we can pull down,
then push up the other side.
Thank our lucky stars
that can be seen
if we squint long
and hard enough.

Recall junior high
science and physics
of bullying, our pull towards
boys and girls
who mock and curse us.
They create an opposite
and equal reaction
in the service
of a balanced operation.

With joy cost accounting
and sorrow gratitude,
because a girl learns
to love the dad who incests
her on her birthday
while the helium balloons
float graciously to the ceiling.

A teenage boy kills
himself, manifesting
a destiny determined
by age six.
Insults fuel us
like the fire
that dries up the rain,
floods the darkness.
Forget about death.
It's all good,
so get used to it.

Today's book of poetry has been away for a few days.  We found ourselves in the middle of Pigeon Lake on a houseboat.  We couldn't bring the entire staff for our weekend houseboat adventure but we did invite our head tech Milo and our new intern Kathryn,  They now share a roof and a poetry bookcase.  While on our Kawartha Lakes adventure we promoted Kathryn from new intern to a full time position with pay and everything.  We will be expecting great things from her in the future.

We read Janet Fraser's Shiftless, to each other, taking turns at the wheel and navigating and turns reading.  Milo and Kathryn turn almost everything into a loving coo at this point but they read with heated emotion and considerable insight.

Fraser's poems came off our lips like stories we already knew, their familiarity both a surprise and a comfort.

In Scarborough my life ground on from one spanking to
the next. Always at the strip mall where grim Mom quick as
shit pulled down my pants and smacked my puddle cheeks.
At four I asked my mother not to spank me anymore,
'cause it hurt my feelings, and she stopped, making me
promise to be good until we got home, when she could lock
her bedroom door. I ran away from home to the Golden
Mile mall where Mom found me on the mechanical pony
trotting and begging passersby for dimes. On junior-high
weeknights I took off smoking to the Halifax Shopping
Centre where I sucked on hard candies and relaxed at the
Eaton's makeup counters and teen magazine racks until
nine when the lights were dimmed and all the mall rats
bum-rushed into the night.

Shiftless by Janet Fraser feels like comfort foot when that's exactly what you need.  Solid poems in a world that is anything but.

ABOUT THE AUTHOR
Janet Fraser was born in her mother’s ancestral home, Saint John, and returned over 40 years later. In the meantime, she lived for long stretches in Halifax, Toronto, and St. John’s. Her first poetry collection Long Girl Leaning into the Wind was shortlisted for the Newfoundland and Labrador Book Award. She teaches part-time at UNB’s College of Extended Learning.

BLURBS
With a painterly hand, Janet Fraser offers deft family portraits of men and women past, and sketches of the painful present. We enter a poetic gallery of rogues and misfits, sons and lovers, matriarchs and loving aunts – some comic, some tragic, all touching. The imagery of painting enters many poems, as when Fraser describes two sisters who “talk flatly for a bit / about our lives’ surfaces.” But the poems themselves delve deep into the core of human relationships, and especially in the “Self Portrait” section, a skilful run of prose poems situates the poet herself in the turmoils, loves and disappointments she has drawn.
- Maureen Hynes


Memory is imagination in this well-peopled collection where character sketches, condensed biographies and shards of autobiography mingle. By turns pious, bohemian, antique, contemporary, confessional, tight-lipped, compassionate and vituperative, these are poems full of longing and regret, a secretive village of black-painted houses with white lace curtains drawn.
- Patrick Warner