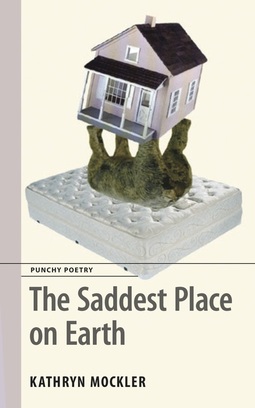 Today's book of poetry had the opportunity to meet Kathryn Mockler last year when she read in Ottawa.  We've also had the pleasure of reading her recent The Purpose Pitch (Mansfield Press, 2015) which we would highly recommend.

Today we look at 2012's The Saddest Place on Earth.  As it turns out The Saddest Place on Earth is a Chinese restuarant in a suburban mall.  Mockler seems to have accessed some plane of special knowledge because she is deciphering some very important code here.  The poems in this book are from the "cruel to be kind" school of poetics and Mockler is a stern principal.

The lucky rapist had only twenty-five cents in his bank
account. He was worried because his utility bill was
going through. He could have paid in installments,
but he knew himself well enough to know he'd never
remember to make those payments on time. So he
set up automatic withdrawal. It was the teller who
had suggested it, and at the time he thought it was
a good idea. But he didn't take into account that he
was living beyond his means and had been for some
time now. He didn't take into account that when he
wanted something he would just go out and buy it
no matter the cost, no matter the state of his financial
situation. It is this personality trait that makes him
a rapist. It is the fact that he has not yet been caught
that makes him lucky.

Every page is a new delightful terror, a horrific tickle.  We get to hear about Buddha joining Weight Watchers, God and the Devil sharing the same guest table at a wedding as dates of mutual friends and so on.   Today's book of poetry just loved Kathryn Mockler's earnest whimsy.

Mockler makes the reader feel like an intimate insider to her slick reason and gymnastic logic.

The captains of the ships are letting us sink.
It's death by corporation.

Don't be so melodramatic.

What do you think it is?

I think it's a case of -- once you look forward,
you can never look back.

That's what I said.

Yes, but the difference between us is that
you care and I don't.

Snakes, pigeons and the ghost of Vanna White, God on Oprah and fat policeman racing bottle caps with dogs, suicidal bankers and laundromat dogs, they are all packed into the pages of The Saddest Place on Earth and damn it if you don't feel a little Carson McCullers sorrow sneaking into the corners.  Mockler has no qualms about playing with your emotional resources.  She has some slick tools at the ends of her remarkable fingers.

If one person jumps in front
of the subway it makes it
inconvenient for everyone
else. It makes it inconvenient
if you're late for work and
your boss is a dick who
drinks vodka from noon until
three from a Styrofoam cup
that seconds as a semen
deposit. But no one mentions
it because it's inconvenient.

The Saddest Place on Earth is a lit fuse, a hot package, the real deal.

Today's book of poetry wants you to go out now and find this witty pistol --  let us know when you are packing.

ABOUT THE AUTHOR
Kathryn Mockler is author of the poetry book Onion Man (Tightrope Books, 2011). Her writing has appeared in such venues as Joyland, The Antigonish Review, Rattle Poetry, CellStories, PIF,The Puritan, La Petite Zine, nthposition, and This Magazine, The Capilano Review,Descant, and The Windsor Review. In 2005, she attended the Canadian Film Centre's Writers' Lab and wrote two short films for the NBC/Universal Short Dramatic Film Program. Her films have been broadcast on TMN, Movieola, and Bravo and have been screened at festivals such as the Washington Project for the Arts Experimental Media Series, Toronto International Film Festival, Palm Springs International Festival, Worldfest, Cinequest, and EMAE. Currently, she teaches creative writing at the University of Western Ontario and is the co-editor of the UWO online journal The Rusty Toque.The Saddest Place on Earth is her second complete collection of poems.

BLURBS
“Mockler’s skill with language and narrative beat lends itself well to these unapologetic poems. At times I found myself groaning out loud, or shaking my head to get a grip on what I had just read. There is heart and terrific depth in this work.”

At times, the starkness and simplicity of the poems is poignant. In “Air Vents,” Mockler wrestles with a sadly all too familiar social and political theme. The poem reads, “I think about the shooting / because all shootings / are one shooting. I think / about all the places to / hide to avoid bullets: air / vents, storage lockers, / somewhere normal.” The idea that “all shootings are one shooting” shows the absurdity of mass shootings being labeled with dates, names, and places, and instead, focuses on the loss that affects all. There is also the idea of helplessness, which is a common theme throughout the poems, and the idea of places where one can hide—which, as it turns out—aren’t many and aren’t all that feasible.
- Heavy Feather