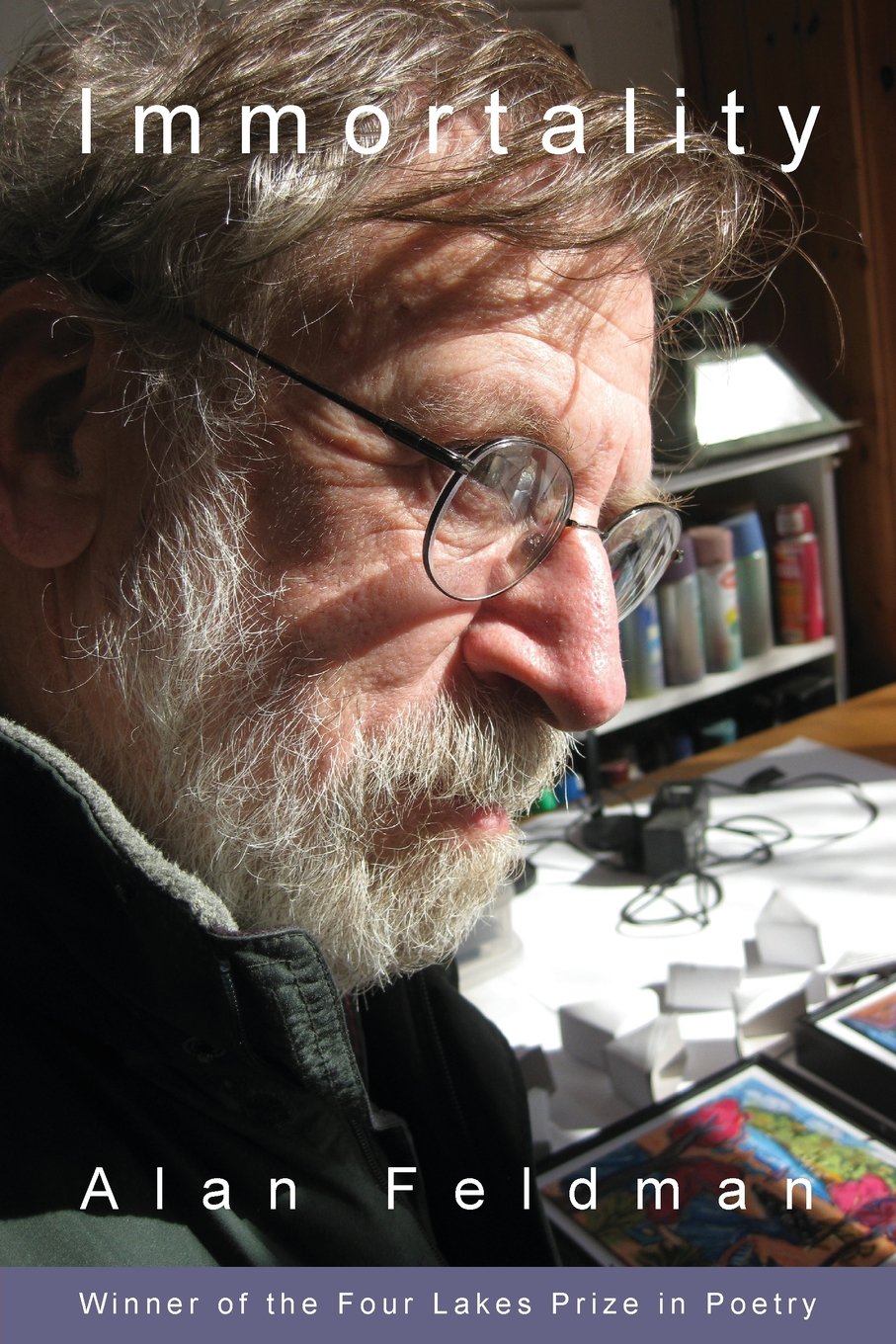 Alan Feldman reads like the gentlest of men but that doesn't stop him from taking you to the deep end of the pool.  Immortality is an emotional assault without aggression or violence.

Alan Feldman reads like the wisest of men.  These poems have that uncanny warmth you feel around a stranger whom you know is going to become a friend.

Alan Feldman reads like a poet bursting at the seams with loving reason and even seasoned hope.

There's a lot of light in her apartment,
falling on the rented hospital bed.
I've been told the dying like to be held,
so, though we're just friends, I make myself
hold her hand, as if the conversation is final,
matters more than others, though most have mattered.

She's seen a couple of rabbis, who were helpful.
It seems there are Jewish angels. (Why argue?)
And she likes the story I brought her,
"The Death of Ivan Ilych," how before the end
he learns so much nobody knows about,
except the reader.

"So many faces," she says of the people who came
for the songfest yesterday evening, over a hundred
crowded into this little place. "Each face a flower.
Each face..." and here she pauses
(the medicines are affecting her word retrieval?)
"so full of memories."

It all makes a strange image in my head:
faces that aren't faces, but wide open,
as if she's discovering that she's lived
everything they have -- centuries
more than she thought.

"Our life in others," I remind her,
citing Pasternak, "that is our immortality."
But she knows that doesn't go far enough.

I'm glad she's thinking of her own afterlife,
since not being alive is, apparently, unthinkable
on the brink of it happening, a kind of shallowness
to imagine it's merely like going to sleep,
though lately her dreams have been so vivid:
an all-night argument with her sister about a dog,
over what color it should be, white or black.

Outside the weather appears to be changeable,
I'm dying to go out there, on the small terrace.

"Go out on the terrace," she says, "before you leave.
The view is wonderful."

Reading Immortality reminds Today's book of poetry of what it is we truly love about poetry.  We like to be moved by words.  We like our heart to pound in our chest when we read something we have just discovered but know to be true.

These smart, smart poems avoid any melodrama or fuss, emotional or otherwise, with intelligent humour and a sensitive dash of pathos.  Whatever the emotional temperature called for, Feldman knows how to dial it in.

Feldman starts his conversation with the reader with his rejection of a suggested mantra, a plea from a friend to "drop the personal."  Today's book of poetry is familiar with that strident battle cry and is pleased to report that Feldman went the other way.

These are deeply personal poems full of universal good intent, maybe even a moral imperative. Today's book of poetry is never sure of anything but we're pretty certain about Feldman's Immortality.

Who knows if my father ever thought
what Montaigne's father did: That every city
should have a place where people in need
could go to meet. How somewhere
a man is starving, and another with a surplus
would grieve if he only knew, and offer the man
a modest but reasonable living. That giving man
could have been my father. Not grieving, perhaps,
but regretful he couldn't be of more help --
a man you could trust to fix things.

Like the man who helped the watchmaker
fix my watch. How, when he couldn't decide
how to loosen the clasp that holds in the battery,
itself no bigger than a small coin,
without breaking it, he turned to someone
more experienced -- a Dutchman, actually,
who seemed happy to demonstrate this very skill,
and upload it to YouTube. Demonstrate it
with a camera in his lap, so we could see his two hands
familiarly, competently, and rapidly
opening the watch to replace the battery,
the way a father would automatically retie his son's shoes.

And there was also his calm voice with its accent,
like the woodcarver's in Pinnocchio,
telling the confused and despairing who were ready
to lose patience and snap the band holding the battery
and ruin the watch -- the watch that could keep running --
how to prolong its life by exercising patience,
the very quality my dad had in abundance,
that quality I always loved him for, of solving the problem
without getting exasperated. Though it's unfair
he didn't have parents like that himself.
Or that -- when the amount of pain rose to be greater
than any pleasure he'd be able to feel --
the little watch-sized defibrillator near his heart
wouldn't simply stop, and let him go.

Feldman's Immortality has travel poems for those that need to go somewhere and political poems for people who need to politicize.  There's a great kick at Walter Cronkite's can in a sailboat poem tart as the lemon and gin in a sunset cocktail.

This morning's reading was attended by our bon ami Alexandre whose enthusiasm and energy gave us all a lift.  Immortality read like the best parts of a story you've been waiting to hear.  Odin, our quiet right hand man, made it clear he liked these poems and then he gave the room a solid once over, looked everyone in the eye.  Kathryn and Milo both read with warmth and grace, just like the poems asked for.

When my daughter calls
and I can hear her baby
crying in the back seat
and she asks, "Dad, would you mind if I stop by
for a quick diaper change and feeding?" --

I'm so glad I picked up the phone,
glad I hadn't set off on my walk,
and quite soon I see her car rolling into the driveway,
and the baby is stretching open her little mouth
and wailing, as babies do --
so enraged not to be able to speak,
not even to be able to think this or that is wrong
except that the whole universe is wrong.

And when they're settled in the little bedroom off the kitchen,
and the baby is suckling noisily,
and then, contented once more,
rolling both eyes, not always in the same direction --
mother and baby in the bedroom
where my daughter herself was once diapered and fed --

I feel so thankful for never having strayed very far
into the wide world, never having served
in the foreign wars of my time, and grief for fathers
who do, the ones swaddled in flags --
maybe because yesterday was Veterans Day,
and though she says she's never done this before,
my daughter tells me she called up a soldier's family she knew
just to say she'd been thinking of them, just hoping
the war we have now will end soon.

And the thin November light is straining through the window curtains
we've never changed,
and I feel thankful for my years right here in this house
the way I imagine a tree might feel thankful
if it were given an opportunity to roam around the world--

how it might say, "So good of you, but no thank you,
where would the birds be without me here? --
the ones that fly back unpredictably
to perch in my thinning hair,
this and every November."

ABOUT THE AUTHOR
Alan Feldman is the author of several collections of poetry, including Immortality (2015), winner of the Four Lakes Prize; A Sail to Great Island (2004), winner of Pollak Prize for Poetry; and The Happy Genius (1978), winner of the annual George Elliston Book Award for the best collection published by a small, U.S. non-profit press. His work has appeared in the Atlantic Monthly, the New Yorker, and Kenyon Review, among many other magazines, and included in The Best American Poetry anthology in 2001 and 2011. Feldman's recent work appears in Hanging Loose, Cimarron Review, upstreet, Southern Review, Yale Review, Salamander, Southwest Review, Cincinnati Review, Catamaran, Worcester Review, and online in Boston Poetry Magazine and Cortland Review. His poem "A Man and A Woman" was featured in Tony Hoagland's 2013 article for Harper's, "Twenty Little Poems That Could Save America."

Feldman was a professor and chair of English at Framingham State University, and for 22 years taught the advanced creative writing class at Harvard University's Radcliffe Seminars. He offers free, drop-in poetry workshops at the Framingham (MA) public library near his home, and in the summer at the Wellfleet library.

BLURBS
“Alan Feldman is our greatest American poet of the household and family, as a loving, growing, struggling, and essential institution. He manifests the kind of love we rarely see in our poetry, and this familial love pours into the world around him. I am personally thankful every time I read an Alan Feldman poem, and Immortality, the book you are holding in your hands right now, makes us understand that immortality lies all about us, in everything we experience as a human being.”
— Bill Zavatsky, author of Where X Marks the Spot

“A richly engaged, near flawless collection. Like those magic mineral waters pumped from deep in the earth, Feldman’s poems can cure emotional arthritis and ventilate the soul. Better poems than these cannot be written in this confiding, intelligent humanist mode.”
— Tony Hoagland, author of Twenty Poems That Could Save America and Sweet Ruin

“These poems enact with grace and intelligence the process by which one comes to possess the life one is actually living. This is an enlarging journey that no reader of poetry will want to miss, offering the pleasures of discovery every step of the way.”
— Carl Dennis, Pulitzer Prize–winning author of Practical Gods

“Alan Feldman’s poems offer the companionship of a witty, thoughtful, sometimes bewildered friend testing his life in language; telling it all. This is a heartening, deeply satisfying collection from a seasoned poet at the top of his game.”
— Linda V. Bamber, author of Taking What I Like