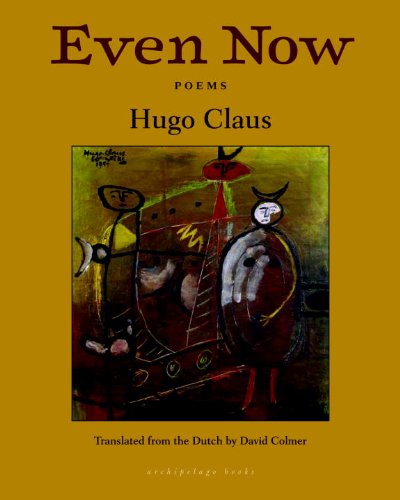 Today's book of poetry often listens to a random selection of jazz recordings from our own collection when we are in the office and as I sat down to type this Toots Thielemans was playing "Bluesette". Now that I'm a little familiar with Hugo Claus it strikes me as marvelous serendipity.

Today's book of poetry is embarrassed to tell you that until Archipelago Books sent us Even Now by Hugo Claus we had never heard of him.  Hugo Maurice Julien Claus (1929-2008) was Belgian, wrote prose and poetry, he was a celebrated painter, directed films, was a celebrated playwright and a translator.

I'm quoting from the cover when I tell you that Claus won every Dutch literary award on offer and that in 2002 Hugo Claus won the prestigious Leipzig Book Award for European Understanding for his body of work.

You are reading about Hugo Claus here because Today's book of poetry fell hard for Mr. Claus while reading Even Now.  These startling poems begin with a stunner from his 1948 book Registration, and it just doesn't feel dated.  Claus was so far ahead of the curve that his early poems still feel fresh, vibrant and contemporary.

We've known it now for centuries,
that the moon is dangling by a thread
attached to heaven, hell or nothing at all.
That the thick blue paint of night
is drooping down into the streets
to wrap around you like a deep blue robe
this evening when you head for home,
dawdling ne'er-do-wells, theatre and recital-goers,
nighthawks, people who are alive,
and that the night will soon be washed away
like cheap blue ink from years ago
and afterwards the pale, pink skin
of heaven, hell or nothing at all
will shine through and no longer pale,
especially not the pink nothing like a girl's
soft and salty sex,
and afterwards heaven and hell and nothing at all
will dry out, go mouldy and decay,
just as old loves and bad habits,
doses of the clap, faithful pieces of furniture
and bunkers from pre-1914 must die,
with no one's help, in a corner, on a sandstone slab,
like cunning old crabs must die.

It is hard to believe how modern the poetry of Hugo Claus feels as it rattles around inside of your head.  David Colmer's translations feel seamless, as though he were simply channeling, and the resulting poems timeless.

Just look at this little masterpiece from 1963's An Eye for an Eye and try not to think of Charles Bukowski.

My soul says, Run,
even if it costs you money and love
So says my soul
But I don't move an inch, I can't
Because my soul, the snake, is still mad about that little
black-haired bitch!

Claus can be as frank, hardcore and beautiful as Buk, but his range is unlimited.  Claus tackled Shakespeare and wrestled him to the ground, dukes it out with the Sanskrit poem "Chaurapanchasika" and comes out on top with a series of short sharp poems that are as intoxicating as liquor.

This morning's read was a real barn-burner.  We wanted to call in our "all things Dutch" expert Brian "Pistol" Peet to give these poems a whirl but he couldn't get our of his snowed-in lane way.  Nature and the city plow have built an ice dyke just for him.  We settled for the regular staff read and hit it out of the park anyway.  The poems of Hugo Claus as translated by David Colmer roll of the tongue like they were buttered.

Hugo Claus was a busy guy and we here at Today's book of poetry have a new poetry hero to add to our pantheon of Gods.  Make no mistake about Claus, he caught us hook, line and sinker.  Hugo Claus can burn with the best of them.

My poems stand around yawning.
I'll never get used to it. They've lived here
long enough.
Enough, I'm kicking them out, I don't want to wait
until their toes get cold.
I want to hear the throb of the sun
or my heart, that treacherous hardening sponge,
unhindered by their clamour and confusion.

My poems aren't a classic fuck,
they're vulgar babble or all too noble bluster.
In winter their lips crack,
in spring they go flat on their back of the first hot day,
they ruin my summer
and in autumn they smell of women.

Enough. For twelve more lines on this page,
I'll keep them under my wing
then give them a kick up the arse.
Go somewhere else to beat your drum and rhyme on the cheap,
somewhere else to tremble in fear of twelve readers
and a critic who's asleep.

Go now, poems, on your light feet
you haven't stamped hard on the old earth,
where the graves grin at the sight of their guests,
one body piled on the other.
Go now and stagger off to her
who I don't know.

Today's book of poetry is slack-jawed with awe.  Even Now is a towering book of poetry and a remarkable achievement.  Poems this ready to read don't come along often enough.

Our new job will be to search for whatever other Hugo Claus titles we can find and that is the biggest compliment we know how to give. 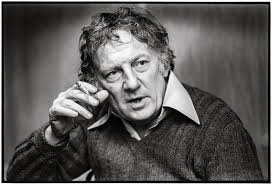 ABOUT THE AUTHOR
The prose, poetry, and paintings of Hugo Claus (1929-2008) were as influential as they were groundbreaking. His novels include The Sorrow of Belgium, his magnum opus of postwar Europe, as well as Wonder, Desire, The Swordfish, Mild Destruction, Rumors, and The Duck Hunt. His corpus of poetry is immense and stunningly diverse. In addition to receiving every major Dutch-language literary prize, Claus received the 2002 Leipzig Book Award for European Understanding for his body of work.

BLURBS
"Astonishing. There is a richness of feeling, exactness of imagery, tender skepticism of the body and its wants - I found myself thinking of Donne, Sterne, Cendrars, Bukowski and Celine all at once. Colmer's translation is uncanny, feels as if every word is the one the poet intended. Yes, here it is! Hugo Claus a permanent part of poetic landscape, opened at last."
- Robert Kelly

"Nobody could write so rampantly about the wild veracity of sensual love for women and life than Hugo Claus. To read him is to be shot into verbal ecstasy. Fortunately these translations do justice to much of this."
- Antjie Krog

"Claus's work has been called a cosmos in its own right... Yet this Promethean artist with his Burgundian exuberance and prolixity... is, like W.B. Yeats, capable of stunning simplicity."
- The Independent

"Claus rages against the decay of the physical self while desire remains untamed. From the beginning, his poetry has been marked by an uncommon mix of intelligence and passion. He has such light-fingered control that art becomes invisible."
- J.M. Coetzee ABOUT THE TRANSLATOR
David Colmer is an Australian writer and translator who lives in Amsterdam. He is the author of a novel and a collection of short stories, both published in Dutch translation in the Netherlands, and the translator of more than twenty books: novels, children's literature, and poetry. He is a four-time winner of the David Reid Poetry Translation Prize and won the 2009 Biennial NSW Premier and PEN Translation Prize for his body of work. In 2010 his translation of Gerbrand Bakker’s Boven is het stil (The Twin) won the IMPAC Dublin Literary Award.

We here at TBOP are technically deficient and rely on our bashful Milo to fix everything.  We received notice from Google that we were using "cookies"
and that for our readers in Europe there had to be notification of the use of those "cookies.  Please be aware that TBOP may employ the use of some "cookies" (whatever they are) and you should take that into consideration.
Posted by Today's book of poetry at 9:09 AM