The Corpses of the Future - Lynn Crosbie (House of Anansi)

Today's book of poetry:
The Corpses of the Future.  Lynn Crosbie.  House of Anansi.  Toronto, Ontario.  2017.

Such tenderness amid so much sorrow.  Lynn Crosbie has done that most difficult of things, she has learned, as Maryse Holder insisted upon, to "give sorrow words."  The Corpses of the Future is bursting at the seams with stunning poem after exhilaratingly sad poem.  Crosbie is documenting the demise of her father as dementia drags him incrementally further away day by horrifying day.

Crosbie is singular in her pursuit of whatever dark truths lay ahead -- she is steadfast but lost in the memory of her fully functioning and much adored father.

The visits have taken on an orderliness that I imagine prison is like, odious and
conciliatory in its steadfast regimen.

What must it be like for him, his mind attacked like a painting altered
with swipes of turpentine, then left exposed.

There are fields of his childhood, alive with tiny raspberries, sharps sticks and
slowpoke turtles, bleeding into his hoodlum teens.

Did you actually rock around the whole clock, I ask him, when my sister suggests
we play his fifties record.

We rocked until the girls said they had to go, or we were too drunk, he says, and
remember vomiting at a party, spills of yellow and green.

A through line of parties with David, his partner in crimes, who visits this August
with a stack of bitter chocolate, and stories my father sits up and shares

Of a detested colleague whose plant Dave sprayed every morning with DDT until
the man wrenched the tended-to, maddening thing into the trash, spiking the
earth with

A pencil that Dave began treating with paint remover: Nothing can grow in this!
the man despaired,

An open can of sardines left in a heating duct during another colleague's vacation;
hours billed to big steaks and tall beers:

He signs his letters with the Gaelic words for Cheers.

One day later, my father forgets that we were there, but he is desperate,
the heavy bear howls for the bars of chocolate.

He doesn't remember seeing me, but he never forgets who I am,
the most besieged of his platoon, and the most enduring: You're just like me,

He says, and my brother holds his head with infinite tenderness and shaves him,
and I lead him back to bed, in my mind I am lifting him again and he is holding on--

Like Anchises as we stagger through the burning city.

In the very centre of the painting we are untouched by ruin: we are five, furious
and suffering and madly in love.

It's a hell of a thing to see your father disappear in front of your eyes only to be replaced by a unfamiliar familiar inhabiting his flesh.  Today's book of poetry has seen this movie from the front seat and it was crippling.  Crosbie has made it art.

This level of honesty could be considered reportage but the uber-talented Crosbie makes it all personal and universal with one sweep of her talented pen.  We survive this painful litany only because Crosbie leads us through.  We get to observe our worst parental fears writ large on someone else's sad canvas.

My father asked for peace and quiet for his birthday and for Christmas and Father's
Day, every year.

I want to live like Napoleon, he said. Exiled in silence on my Elba.

In their early fifties, my parents moved to Curacao, one of the ABC islands, just
north of Venezuela.

He worked for some Dutchmen there, moving money around, and my mother
volunteered at an orphanage.

They went to church every Sunday: one Christmas Eve, my father asked my
sister and me to go to the early-morning Mass.

We declined and he offered us money. I'll give you fifty, no, one hundred guilders.
Has it come to this? he said.

They stayed for many years, and on our last family visit we sat at the beach and
watched the sun go down.

Dad disappeared and I went off to find him.

He was sitting in a rowboat, also watching the sun cannonball into the water, in a
great violent splash.

The boat was called the Elba, I noticed.

He had put his shoulder to his dreams. Dad, why won't you get better?

In Curacao, there are hundred of stray dogs, all of them big yellow curs--
fireworks are set off on every holiday,

This terrifies the dogs and in the morning you drive the fast streets and keep
swerving,

There are so many dead dogs on the road, who ran there, out of their
minds with fear, only to be struck,

To be battered and ground into peace, then quiet.

Somehow, Lynn Crosbie forgive me, it seemed the right thing to do, so this morning during our production meeting I had Milo, our head tech, play Amy Winehouse's astonishing album Frank on the office speakers.  There is absolutely no correlation of narrative between Winehouse and Crosbie, but emotionally Winehouse strives for the same sort of dark clarity that Crosbie insists upon.

Or maybe I just wanted/needed to break a little of the tender tension in the office.  Today's book of poetry couldn't help but notice the sudden run on phone calls to parents after this morning's read.

Crosbie writes poems like dominoes, one as solidly constructed as the next, each one solid enough to stand on its own, each one a building block.  Her poetry machine punches these, fully formed, out like clockwork.  The Corpses of the Future comes in at a hefty 140+ pages and there's nary an unnecessary poem.

Lynn Crosbie poignantly goes where we all fear to be and does it with unflinching honesty.  The Corpses of the Future  isn't just a pained tribute to her father, it's a primer for the rest of us on how love overcomes pain.

For the Person Suffering

From dementia, it is traumatic to relive certain events over and over. As such, certain
topics should be avoided--

This is how I started lying to my father.

I read an article by a Dutch doctor, which instructed me never to say, No, Dad,
your mother has died,

To watch his face crumple in confusion and pain.

This spring, when he asked me about our bets on the horse race, I made up names
for the runners, and he added Hurry up Honeybun to the list:

One hundred on the nose! he said.

Later I would try to register the name, and get into an awkward, meretricious
conversation with a horsey sort located outside Leeds.

Today, tired as ever, I listened carefully to my father's story about the football
game.

He was taking me to see the Alouettes versus the Roughriders, but could I call
about the tickets?

Of course I can, I said.

I'm on this damn boat, he said, and I told him I would send Mom the information.

They think I have some illness, he said. Expialadocious.

I repeated the word, as though writing it down.

We've never been to a game before, I said, feeling winded from the little smacks to
my heart.

I want to take you, he said.

He and I are in a fall stadium, drinking spiked coffee as he explains the rules of
football.

We are wearing Als hooded sweaters and once in a while his arm presses against
mine and I double over in pain, reliving the very thought of my father.

Wanting to take me to a game.

Today's book of poetry had Milo go to the stacks and he came back with the following:  Miss Pamela's Mercy (1992), VillainElle (1994), Queen Rat (1998), Missing Children (2003) and Liar (2006).  Which reminds us that we are big fans of Lynn Crosbie here at Today's book of poetry but now realize we have some catching up to do on the Crosbie canon.

This book will be remembered. 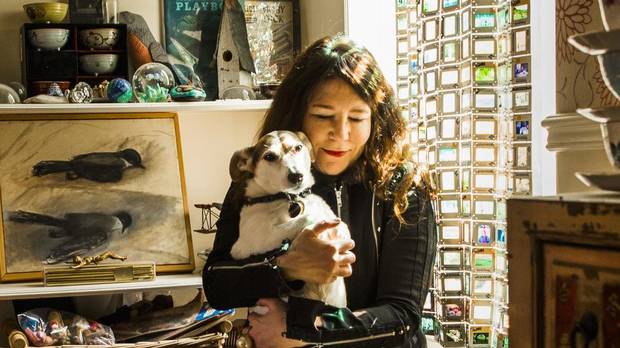 ABOUT THE AUTHOR
Lynn Crosbie was born in Montreal and is a cultural critic, author, and poet. A Ph.D. in English literature with a background in visual studies, she teaches at the University of Toronto and the Art Gallery of Ontario. Her books (of poetry and prose) include Queen Rat, Dorothy L’Amour, and Liar. She is also the author of the controversial book, Paul’s Case, and most recently Life Is About Losing Everything and the Trillium Book Award-nominated novel Where Did You Sleep Last Night. She is a contributing editor at Fashion and a National Magazine Award winner who has written about sports, style, art, and music.

We here at TBOP are technically deficient and rely on our bashful Milo to fix everything.  We received notice from Google that we were using "cookies"
and that for our readers in Europe there had to be notification of the use of those "cookies.  Please be aware that TBOP may employ the use of some "cookies" (whatever they are) and you should take that into consideration.
Posted by Today's book of poetry at 8:35 AM