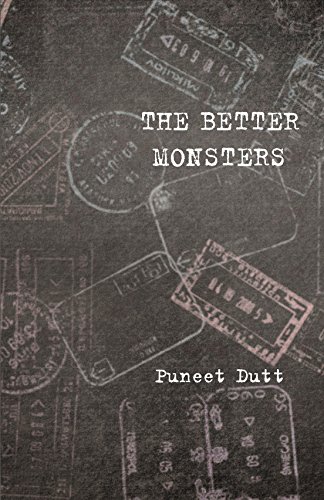 The poems in the first part of Puneet Dutt's bracing and honest The Better Monsters come from the voice of an outsider.  Dutt's voice has been in camps, heard gunfire at night.  But by the time we are finished Dutt is insider enough that she knows exactly how to reach us.

Whether in Jalalabad or Kabul Dutt's world-weary voice always remembers that:
"to see fighters
from another country with guns
in my local market everyday
not knowing what they were doing
I would hate them"
VIII
Over Cider And Whiskey In Hotel Rooms

Dutt's voice is also inhabited by those same fighters, lost in a world foreign enough to them to allow any extravagance or insanity.

Hey God, I'm just a little man got a wife and family
he knew the songs
the CK jeans
Yankee's cap
they sold him

dekhna kyah tah
what was there

Time and distance take new shape when you are on the other side of the world from where you started, the earth your toes remember both too far away to touch and too long ago for warmth.

Punnet Dutt's tender and tragic poems seat the reader in the empty space endured by those who are forced to leave their own terra firma, their own culture, their own countries.  Dutt makes it real on the page.

Today's book of poetry thinks that Puneet Dutt talks from both sides of the invisible fence that impedes all our human travails and this encompassing vision serves her well.  As harrowing as some of the moments these poems endure, Dutt's voice ultimately never gives up hope and that's the magic.

it's 4 a.m. and clear
13 degrees centigrade
in Jalalabad

i type:
"calculate distance between two coordinates"
and receive
the haversine formula

purplemath.com promises
the distance formula   its origin   its use
the length of hypotenuse   is the distance between two
points

another
says to just type your equations and let the calculator do
the rest!
to find the distance between two points
(X1,Y1) and (X2,Y2)
all that you need to do is use the--

Our morning read was a little more low key than usual.  Apparently our entire staff, moi included, decided that we could drink all the red wine we could find in the bar.  Amateurs that we are we left three bottles standing at the end of the night but we'd admirably polished off several of their friends. The morning read was subdued intensity tempered by aspirin.  But Dutt's voice was clear, despite our fumbling efforts, these poems worked.  They have been tempered over hotter flame then any of us will endure.

America begins
this way
48 Trenton St.
where i slowly ask
what i'd thought of for a year--
why did you leave me behind?

she sniffs and
immediately pulls me toward a bath alarmed
by the size of my long loose undergarments
stitched in India elastic frills and ribbons at
each end you can't wear those!
i'll have to take you
shopping!
sluicing me over the head with measuring
cups of soap

immediately America begins with a vigorous
scrubbing immediately i change and please so
immediately i know America is not for big
open questions my mother brandishes card
after card slashing through lines builds my
closed of each auditions next day don't give
them reasons to throw stones this she gives me
now i arrive in Canada i don't know what to
do immediately when i arrive to Canada what
to do immediately?

Today's book of poetry thought Puneet Dutt's poems were human in a way that allowed all readers to get to the center of them.  But once there Dutt isn't reluctant to insist you see the battles and the battle scars from a new position.  Dutt aims for The Better Monsters amongst us human beings and emerges at the end of her harrowing journey still embracing hope.

ABOUT THE AUTHOR
Puneet Dutt received her MA in English from Ryerson University. She is the author of the chapbook PTSD south beach (Grey Borders Books), which was a Finalist for the 2016 Breitling Chapbook Prize (Phantom Books). Her work has been published in a number of journals and in Imaginarium 4: The Best Canadian Speculative Writing. She was born in India and raised in New Jersey. She now resides in Toronto with her husband, where she is an editorial board member at Canthius and a creative writing workshop facilitator with the Toronto Writers Collective. She can be found online at puneetdutt.com.

BLURBS
“Fierce and finely crafted, The Better Monsters distils life’s strangeness in poems that bridge the gap between warning and augury. A tour-de-force from one of Canada’s most promising writers.”
—Jim Johnstone, author of The Chemical Life

“In this gripping first collection, Dutt evokes innocence within and despite the cruel enigma of inevitable arrival. She masterfully connotes this ironic centre—the empty solace of truth telling: ‘so fast they left us/to get there.’”
—Hal Niedzviecki, Broken Pencil Magazine