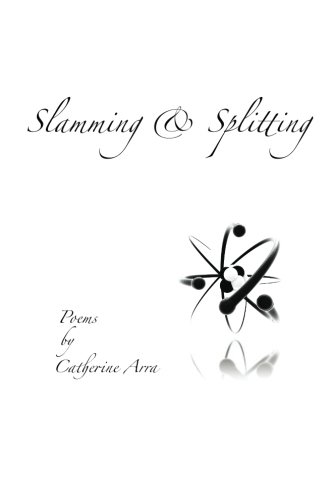 He places a clear glass bowl in the center
of the breakfast bar, fills it
with lettuces, arugula, silky purples and greens.
He washes and slices a plump yellow pepper
dashes its brilliance into the crispy leaf bed.
A wizard concocting a potion
he tumbles all together, anointing his offer
with fragrant vinegar, virgin oil.
He hands me a fork with the sweet fall of his lashes
inviting me to dine.

Well Loving from the Backbone certainly starts off sweetly enough.  Love poems that would draw the birds out of the trees.  But surprisingly that doesn't last and when it all comes falling down Catherine Arra certainly has something to say about that.

We all know that love, when it comes sex-wrapped and drooling with lust's vice-grip talons, circumstances will kindly rip you a new one.  The blurbs on the back of Loving from the Backbone might lead the reader to believe that there is gentle work afoot but Today's book of poetry recognizes Arra's tone and sees the iron fist under the velvet glove.

They do not scratch, they do not tear;
their massive blood
moves as moon-tides, near, more near,
till they touch in flood.
D.H. Lawrence
from The Elephant is Slow to Mate

Where in this brain
or when in hope for good love at last
did I make the rule
I could write only sweet when I wrote about you?
Verse to exalt you, sigh your sensual prowess
odes to immortalize your basic male parts?
What about the mid-ways I've crossed alone
apologies swallowed by dial tones?
What about priorities that wrung me under
property, ambition, past lovers, friends?
What about the gall I've rustled into dinner
the rage into quiet forgiving?
Where is this body
or these carapaced holes of a tattered psyche
did I find the childhood
to love you so blindly or at all?
Is it the rising of your sex above the silk
and the arching of my crooked spine?
Is it blindness that tunnels intellect
or instinct that moves the elephant to mate?

Loving from the Backbone becomes a torrid and delightful reckoning of that on-going battle between the sheets and everywhere else in the house.  Catherine Arras protagonist leaps back into the fray with the experienced arms of a fervid Venus.

Arra can whip up a carnal frenzy with the best of 'em and Loving from the Backbone dares to accurately deconstruct it all for the poetry world so that Arra can continue this dance with considerable panache.

Love you under my peach
and behind
on top
nearing and always
sweet.
Honey, please do scream through me like forest sun.

Slamming & Spitting, the second Catherine Arra chapbook that Today's book of poetry is tackling today starts at the bottom.  Arra opens up the abyss and invites us in for a look as she attempts to end difficult love with grace and endevours to move forward.  Slamming & Spitting starts with a relationship ending amid much regret.  All of memories best angels haunt the separation dreams of night, these poems let you know that the loss feels like a hidden finger weighing down the scale.

In 1913, Niels Bohr made a metaphor
reached across decades to a fifth-grade girl.

His atom with its nucleus of protons and neutrons
chalked on the blackboard in blue and pink
danced inside dances of yellow ornaments.

It's pretty, she thought
She would remember it
not the science - the idea, the unwritten law
making it appear so and somehow obeyed.

Living, she discovered, was a theory
of something like atoms
a super-collider adventure of slamming and spitting
speeding and slowing, or annihilating parts
back to primordial silence.

No matter
Bohr's picture was blasted out of contention
twelve years after he drew it.

No matter
it was replaced with no picture at all - a condition
like poetry before it's written.

By the end of Slamming & Spitting Arra has reckoned with her crisis, worked for atonement and has come out the other side whole, it not disheveled.  Some of us never make it to shore from that murky water, so often slipping under bitter water with shore in sight.

Our morning read was a lot of fun.  Catherine Arra isn't shy about having a few fireworks in her poetry parade and these two chapbooks got rolled over with some energetic fever.

Sunflowers in mid-September
heavy heads bowed low to the roots
of crippled stems.

A seventy-foot maple
under the chainsaw's wedge.

The temples of antiquity
when pagan gods fell to the order of one.

Fruits and vegetables
too long without water.

The horses in Gone With the Wind and True Grit.

A universe that stops expanding
a body that stops breathing.
A marriage.

ABOUT THE AUTHOR
Catherine Arra is a native of the Hudson Valley in upstate New York. A former English and writing teacher, she now teaches part time, facilitates a local writers’ group and spends winters on the Space Coast of Florida. Although a writer from teenage years, only after she left the classroom in 2012 has she had the time to both write and publish.