What I Learned at the War — Jeanetta Calhoun Mish. (West End Press) 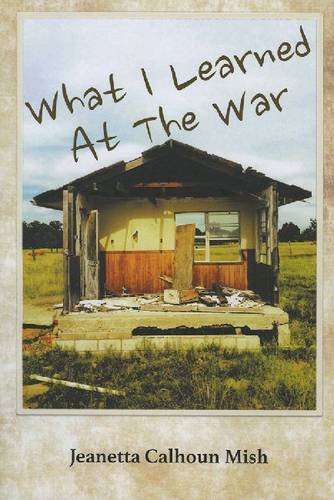 According to Jeanetta Calhoun Mish "history is a bitch."  That's not a direct quote, more of a spiritual acquiescence to a way of thinking.  Mish doesn't really concern herself with time as we know it.  Time and history just partial information in Mish world.

Mish comes straight at the reader and with considerable velocity.  Mish goes on to tell us that "history resists, tells her story through the mouths of the winners."  But when ever there are winners there are losers as well.  Mist has dirt under her fingernails, her characters do too.  Today's book of poetry thinks Mish has slow-danced us all into submissive/willing audience.  We like what she is cooking.

What I Learned at the War is unsettling because every word reads/feels true and a little dangerous.  Where in the hell does fate fit in with history?  Jeanetta Calhoun Mish lays it all out.

At 8am, my friend dropped me off in front
of a nondescript yellowish strip-mall building
at the crumbling edge of Little Rock; the parking

an assortment of marginally legal employments.
Hoping to land a job with only a high school
degree, two weeks after a miscarriage, one week

after my boyfriend wrecked my car, hocked all
my furniture, spent the rent money, then ran off
with his ex-wife. I believed I could change

my life by changing jobs. The lead, My Roma,
just back from THE most motivational seminar
EVER, lurched around the room like a speed freak

in a baby blue leisure suit that went out
of style eight years before in 1975. We
would SELL LIKE SAMSON (whoever

the hell that was. Perhaps My Roma thought
he was the guy who invented Samonsite).
The Outbound Telemarketing Specialist

who had been there longest, My Williamson,
handed us our scripts. Hello, my name is Machine
Levene and I'm calling you today because you are

the lucky winner of a set of steak knives. You don't
remember entering a drawing? You didn't —
we've chose you from a long list of deserving

men and women who rarely catch a break
much less win a prize. You only have to pay
for. . .I made it half a day before an old lady

answered with a voice that sounded just like
my granny's and I couldn't bear the shame of lying
to her, of asking her to send only $49.95 in shipping

and handling charges for a set of plastic-handled
steak knives with flimsy aluminum blades, couldn't
tell her that, according to My Blake who flashed

a sample like a switchblade, they came encased
in a red velvet bag with faux silk drawstrings. I
apologized for disturbing Mrs. Somebody's Granny,

grabbed my coat and walked out. And kept walking
a mile to the nearest bus stop where I waited an hour
for the next bus. Three transfers and two hours after

embarking, I was back where I was staying with a friend
from AA. A new job had not changed my life, but it had
changed my mind about the value of employment

at all costs. The next week, I hitchhiked home
to Tulsa, couch-surfed, read Marx for the first time,
called myself proletarian. Never looked back.

Sometimes you just like the way someone talks, the way they get to their point, Mish is instantly one of those poets for Today's book of poetry.  If any of my sisters wrote poetry I'd be awfully proud if they wrote these poems.

What I Learned at the War is conversational and confessional.  Today's book of poetry simply enjoyed the ride, cover to cover.  Our assessment is that Jeanetta Calhoun Mish is searching for beauty, but lets us know how much truth is in it's path, and the truth is only occasionally beautiful.

Declaration of a New Poetics

From this day forward
let there be no more abstractions
nor dissembled sighs
I proclaim a new poetics rising up,
flaming out of my body as if
I were the kiln and you the potter
who flung open the door.

From now on I shall speak
only the language of the sensuous,
the sensual, the reality of
taste—touch—smell—
sight is too tricky, too easily seduced
and hearing is reliable only when
applied to the code of ohs and ahs that
cannot be mistaken or misconstructed.

The practice of my new poetics
requires that I run my tongue
along your hip, grasp your stony calves,
inhale deeply at every dark conjunction of limbs.
This poetics demands I ban every pretense,
all talk of love and questions of propriety.
It allows only this primal sacred performance
this paean to need, this clashing of bodies.

In this dangerous intriguing encounter
we open ourselves to the edge
to this honesty the body knows
to our poem of desire.

Our morning read was holiday-weekend short as most of our loyal minions abandoned ship and headed to the beach.  Still, those of us braving our tepid office and cooking temperatures (83 F at the moment in our offices) gave What I Learned at the War a good bounce around the room

Kathryn, our Jr. Editor, reminded us all that we'd been on a strong woman's roll here at Today's book of poetry and Jeanetta Calhoun Mish raises the bar just that Oklahoma tough gal higher.  Mish does it clean, with full on eyes-wide-open honesty.  What I Learned at the War reads like a bruise, you can feel it now, but you'll feel it more later on, see it more brightly as it sets in.

In Tahlequah, time staggers. It halts, leaps, spins, and burrows down
into the rocky soil to remind us that everything that ever happened in
a place is happening still.

Staggers isn't such a pretty idea.
Especially with Indians in the picture.
And Irish. And Scots.

All people who lean into drunkeness
as shadow leans into light.

Say instead: stutter steps.
Dance one forward, two back.
Sideway if you're feeling the
presence of haints and shades.

Or go ahead and live unvarnished.
Admit the ancestral jake leg,
drink until evening has to close
because the moon said so, flip the
bird to sun lurking on horizon,
pissed off and ready to make
your hangover worse.

Don't trust her. You never
know what garments she'll wear
to your funeral.

What I Learned at the War leaves an impression. ABOUT THE POET
Jeanetta Calhoun Mish was born in Hobart, Oklahoma. She received a BA and an MFA in English from the University of Texas - Permian Basin and a PhD in English from the University of Oklahoma. Mish is the author of What I Learned at the War (Lamar University Press, 2015) and Work Is Love Made Visible: Collected Family Photographs and Poetry (West End Press/University of New Mexico Press, 2009), winner of the 2010 Oklahoma Book Award for Poetry. In 2019, she was named an Academy of American Poets Laureate Fellow. Mish currently serves as the poet laureate of Oklahoma.

BLURBS
"There's a never-misty nostalgia and sometimes hard edge to these poems of a rough childhood, and an homage to the equally rough environs of Oklahoma. It's the sure hand of the writer that keeps you reading, the propulsive sense of a life happened, lived and recorded, with as much candor and skill as the best poetry offers us"
--Rusty Barnes, author of Reckoning

"The power in these poems pitches, confessional and kindred like a puck along some pocked seam of red dirt clodded sanity. Grief-drenched, malady-reamed, and clumped up in some rancorous home front fault line ceremoniously split wide open, what proves revelatory, beyond Mish's poetic prowess, is her delivery of synchronicity in place and time--a sweet, sweet surrender."
--Allison Adelle Hedge Coke author of Streaming