What The World Said - Jason Camlot 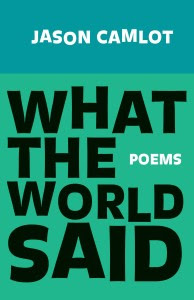 Camlot's fourth trade collection of poetry, What The World Said, could only be written by Camlot.  No one else sees the world with quite the same lightness, all that dark vigor.

Learn that the minyan's root is counting,
count who's there, who isn't there.

Do one meaningful thing today,
not counting the hour that you pray.

Discuss where your boy will be next week,
count the days until summer's end,

smell the garbage in the morning,
count your steps towards mourning.

'How do you get virgin wool?'
'Ugly sheep.' Count yourself lucky.

Break in a new pair of shoes,
pick up newly shortened pants,

Return to your old pair of shoes.
Try again another day.

Sing a song above a hum,
hum of what you cannot know.

When Camlot makes lists they sing with history, rhythm, mystery, humour, conflict, reason and inanity, sometimes people just want to see the firework in full flame, all the fuses lit.

Camlot is a little like a guitarist or saxophone player sustaining a solo in these lists, magnifying a particularly satisfying riff.

We waited for you on the pavement
as long as we could
but suppertime was approaching
so we played street hockey
with a puddle-wet
tennis ball, without you.
I scored lots of goals
with you not there. I might
have scored fewer if you—
Ball Hog, Cherry Picker, Death—
had shown. We moved the nets
to the side of the road to
let cars pass. They always
slowed down. The drivers
sometimes waved at us.
One dusty blue Chevy Caprice
Classic seemed to have
a murky child without eyes
lurking in the back seat.
Was that you, Death?
Why were you forbidden to play
today? No sweat, man.
You know we'll be there again tomorrow.
Don't tape your stick
and bring winter gloves
(even though it's spring)
to protect your hands from view
of living, mortal,
suburban kids.

Another tool Camlot employs is the full-on epic all-encompassing magic-thinking rant.  He may not think of it as such but from this vantage point it is how I would describe his carefully articulated hi-jinx.  How else would you explain something like the marvelous title poem "What The World Said".

A Jewtard such as I
has no right to say good morning
once the morning prayers have begun,
unless I am first addressed by someone
more learned in the Torah than me.
Reasons for speaking once prayer has begun—
speaking as an interruption to prayer, I mean—
are few. Fear is one allowance the Mishnah
gives. If one is addressed by a ruler
who can harm you if you do not reply,
then you are allowed to disengage
yourself from the tefillah
(immersion in prayer) and respond.
But who, really, do I have to fear
in my life? Who can hail me out
of this half hour because the possibility
exists that he will have me beheaded,
or burn my house to the ground, or take
my wife and children from me,
or strip the skin from my left arm like
apple or potato parings?
I can imagine the existence of such a man,
but thankfully, I know I will not meet one
who will thus inhibit me from doing
my Jewishy things.

And in this world where there is more than one Jason Camlot, there are letters to Death and to David, the Jewtard Jason Camlot shows up as does the historian, the film-maker, a cobbler, a stand-up comic, a Rabbi, and so on...

Jason Camlot's What The World Said is another shot across the bow from one of our most imaginative and articulate voices.  When Jason Camlot speaks, I listen.

Jason is the author of three previous collections of poetry, The Debaucher (2008), Attention All Typewriters (2005), and The Animal Library (2001).


www.mansfieldpress.net
Posted by Today's book of poetry at 9:35 AM