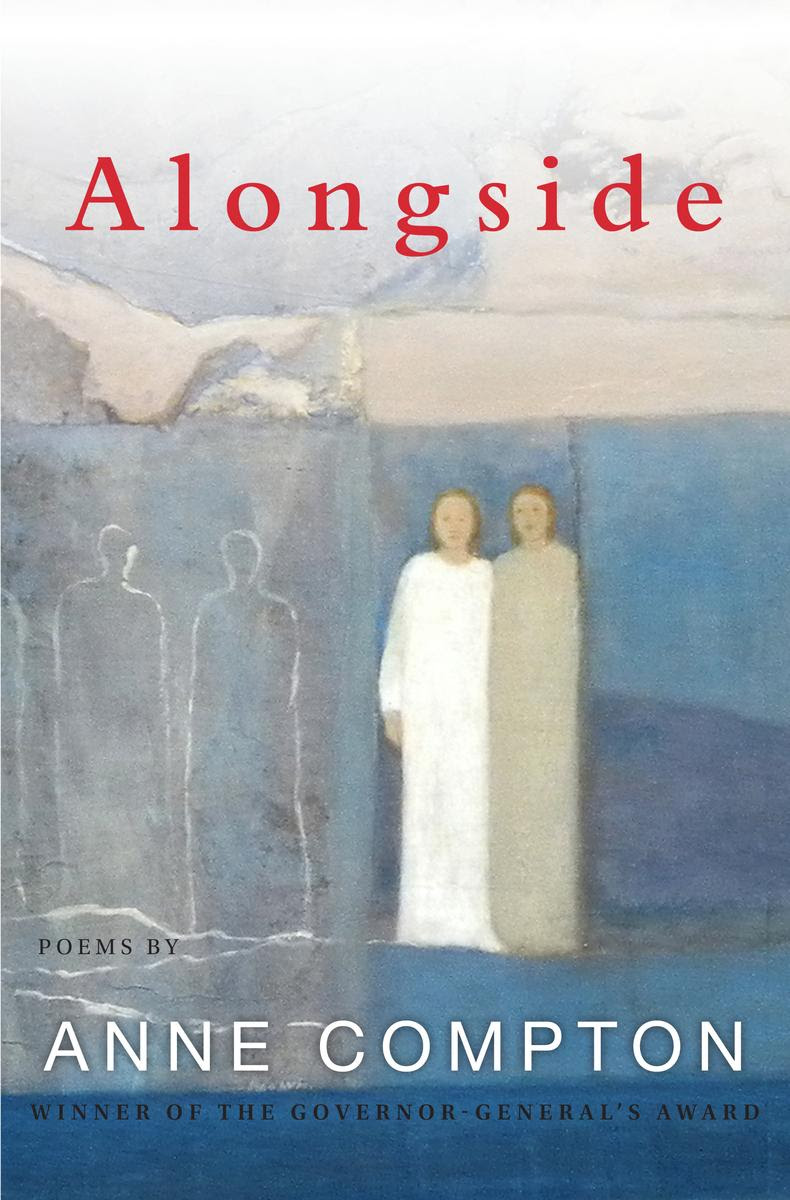 "Reading, it seems, lessens the sorrow of being awake.
from Reading Around, Anne Compton

Anne Compton's newest collection Alongside continues the high standard of excellence that won her a Governor-General's Award and the Alden Nowlan Award for Excellence in English Language Literary Arts.

From so simple a beginning endless forms...
most wonderful have been, and are being, evolved.
Charles Darwin

According to the physicists, the photoreceptors of the eye
have reached optimization:  Practically perfect, they can't
evolve further.  For what, you have to wonder, sight so keen?

With those good eyes, a woman's bound to notice beauty
when it enters a room, like I did that once and once is enough:

Photons of light blooming around you.  Bones so elegant,
they testify to the first or final forms of things.

A voice summoning me to the surface, to attention -

to see, you said, how we are, like a child, surrounded
and adored by what we behold.  Reciprocal fit.

I could say you were sent, opener-of-eyes.  Unforeseeable,
your going 'though with no diminution of the light.

A harmed child, I was gutted and intensified:  An attention

I can't let go, needing to name the beautiful in the least sprig.

Compton is so precise and yet always at ease, the poems feel more conversational than worked over, worked on, text.  Clearly there is much happening beneath the unruffled surface of these elegant poems.

A dark pond at the centre of the hub city.
The first ice that forms is always transparent -
a fleck-free window, revealing what's there,
way at the bottom.  You can lie at your length
on ice only an inch thick.  Its cold - a breastbone
away from the heart.  This I did, looking into him.

When Compton could be seen as terse she has such an accuracy of tone that she never sounds abrupt, never falters.  Every word in this work is deliberate as a surgeon's stitch.

What's more perverse than the paradoxical dressing
of the dead?  Hired men straightening your father's cuff.
Rouging up the omega absence - wide as a country pond -
settling on your mother's face.

If, by its mass, a body can warp time and space,
what can't the sensational spirit do, vacating ours,
bearing with it so much touching upon our senses?

It's an evolutionary truth, everything's made to fit
with something else:  The long-tongued moth matched
to the deep-throated flower.
The nectary of their loves,
where we sipped sweet water, is need-by-design.

They take with them the last aromas of a room
voices held in the semicircular canal of the ear.
The precise weight of someone's hand on a limb,
translated with alar speed to some new language.

The waters above the heavens have been drained,
a boggy backwater, but the iconography of flight
still suits the landscape-emptiness left to us.

We try to keep them near, pretend they're present
while we eat the burial cakes.  When what's gone
is parcels of ourselves.  First thing mornings, the mind's
a vacant pond.  Its surface tension scumming over.

Anne Compton's poetry is a long way from my hero Charles Bukowski in almost every way imaginable - but to me, I hear the same clarity of the honest heart, the clear voice, searching to understand our world, our place in it.

Alongside is rife with one lovely poem after another, brimming with vibrant intelligence and wit.  My kind of book.

FROM THE BACK COVER:

"Compton's poems speak to our nomadic existences, the transience and connectedness of our fragile lives."
-Winnipeg Free Press

"It is a joy to trip with Compton over girlhoods, wakes and their accompanying waking, and the language of confluence and convergence, memory and community."
-Canadian Literature

ANNE COMPTON is a two-time winner of the Atlantic Poetry Prize and winner of the Governor General's Literary Award for Poetry for her second collection, Processional.  In 2008, she was awarded the Alden Nowlan Award for Excellence in English Language Literary Arts.  A former teacher and writer-in-residence at the University of New Brunswick at Saint John, she developed and directed the acclaimed Lorenzo Reading Series.

www.fitzhenry.ca
Posted by Today's book of poetry at 7:40 AM