The Lawyer Who Died in the Courthouse Bathroom - Thomas J. Erickson (Parallel Press/University of Wisconsin-Madison Libraries)

(This one is for Luba)


I don't know Thomas J. Erickson but I'd certainly like to.  My sister-in-law, Ann Marie is a lawyer and one of the wittiest people I know.

One of my closest and dearest and oldest friends, Michael Thompson, is a lawyer and is also the smartest person I know, and one of the funniest.  Thompson introduced me to Kurt Vonnegut when we were teenagers along with a number of other important discoveries.

Dead serious and tongue in cheek, Erickson's The Lawyer Who Died in the Courthouse Bathroom is intelligent, funny, sad and enlightening.

I smoked a blunt and drank too much bumpy
face so I called a johnny cab to take me to my baby
mama's crib. I saw a brother kickin' it. He said he
got a couchy-coupon from my lady. I said do you
know what time it is and he said it's time for some
drama so I took out my strap and busted a cap
on his ass.

These words -- in their doomed vibrancy -- literally
mean: I smoke a marijuana and cocaine-laced cigar and
drank too much Seagram's Gin. I called an anonymous
phone number and told them where I was. A few minutes
later, a car picked me up and I gave the driver five dollars.
I told him to drive me to the mother of my child's house.
I saw a guy on the corner who told me that my girlfriend
had propositioned him for sex. I challenged him to a duel
and he accepted. I pulled out my gun and I killed him.

Eventually, I will argue to the jury the following:
My client had a drink with friends. He called a taxi
to take him home to his family. On the way home
he encountered a long-time enemy of his who spoke
rudely about my client's girlfriend. The man pulled
a gun on my client. My client killed him in self-defense.

I explicate, obfuscate, mitigate, equivocate --
the translator of a story of death.

Most of these poems are set within Erickson's legal world of trials, criminals and legal process, but what is most clear is that regardless of what sort of lawyer Erickson is -- he is one hell of a good poet.

It is evident that Erickson has the tools to write about anything - for now the world of a lawyer and his orbit provide sufficient material for Erickson to shine.

Interpretation is the revenge of the intellect upon art.
-Susan Sontag

I walk into a video store and ask the clerk
if they have I'm Not There. The clerk
checks his computer and says, "No,
but we have I'm Not Scared." His tone
is expectant and hopeful and it makes me feel
bad to tell him that while it sounds close,
it's not the movie I wanted.

I represent drug clients with the given first
names of Kilo and Easy Money, who sell
teenagers (one-eighth grams of heroin) to teenagers.
I have two teenagers.

Until a few years ago, I thought the term fitful sleep
meant a good night's sleep. Now that I know
the true meaning, I'm not sleeping so well.

HIDTA (pronounced high-da) is an acronym
for High Density Drug Trafficking Areas
which is an anti-crime task force. My client keeps
complaining that Al Qaeda is after him.
I think he means HIDTA.

When Kafka read The Trial to his friends
for the first time, he laughed so hard
that there were moments when he couldn't
read further. I, for one, do not think
the alienation of modern man is so funny.

With quantum leaps of logic and reason Erickson people's his sad stories with famous poets, Franz Kafka, even "drunk Mike" shows up.

The Lawyer Who Died in the Courthouse Bathroom got a big thumbs-up from everyone in our office including Elliott, the office gopher, who generally only reads poets with a "P" in their name.  He knows everything there is to know about Purdy to Pound, Pratt to Paz.

Even a lawyer carries in him the debris of a poet.
-Flaubert

I love to push down the brown
paper bag to get to the mouth
of my forty and I love to screw
the cap back on after every swig.

It is the morning after a crackling
trial. I'm thinking about my gnome
of a client with his beady-black eyes
and salt-and-pepper beard -- the kind
of beard that comes right up to the eyes
like a mask.

The morning dew has covered my car
windows like a gauzy cocoon. I
hear a dog howling with the conviction
reserved for strangers.

While we waited for the verdict, my client told
me he had molested the boys for years.
He told me this because he knew
he was going to walk and it was time
to let me in on the joke.

I take the empty bottle and knead
the moist sides until the glass is warm
and the tiny droplets fall and pool
together and now I have enough
left for one more drink.

Erickson's all too brief The Lawyer Who Died in the Courthouse Bathroom has more to it than just poems that brush with the law, it is full of promise.

Here is a poet we will want to hear much more from at Today's book of poetry.  These poems raise the bar.

And if I am ever in trouble in Milwaukee, Erickson will be the first person I call. 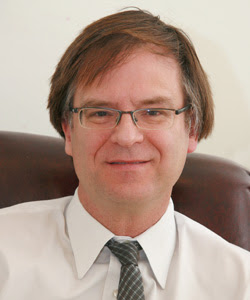 ABOUT THE AUTHOR
Thomas J. Erickson was born in 1960 and grew up in Kohler, Wisconsin.  He received a BA from Beloit College in English Composition and a law degree from Marquette University.  His poems have appeared in numerous publications including The Los Angeles Review, Quiddity International Literary Review, Mad Poet's Review, The New Poet, and Slant.  He is an attorney in Milwaukee, where he is a member of the Hartford Avenue Poets.  He is the proud father of Charles and John.

Email ThisBlogThis!Share to TwitterShare to FacebookShare to Pinterest
Labels: gerald so, michael dennis, parallel press, the lawyer who died in the courthouse bathroom, thomas j. erickson, university of wisconsin-madison libraries