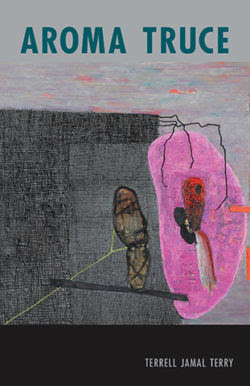 "We go inside through the doors
of libraries & bars  --  lonely
by choice because we're choosy."
from "A Dusty Portrait"

"We take up topics we cannot
comprehend: strange things
about untreated weather."
from "Woman Peels Water"

Today's book of poetry is always drawing conclusions and we'll be the first to admit that we might be wrong but here we go --  Terrell Jamal Terry's solid Aroma Truce is no truce at all.  It's a silver-tongued indictment disguised as love poetry.  It's the poet telling us to:

"Make a little space's
because death's a parade.
Don't hate the way it loves you."
from "Segue Gauze"

Terry is confessing, firing a warning shot over the bow with beautiful contempt and butterfly footwork.

How I Came Here

Grab shade, shed & mend how I
broke open into real things,
leather & woodlace. I brushed
hardwire music away from my life,
towards woods to burn
throughout half-painted winters.
I picked the dark glass from my head.
I didn't enter for politics
or to persuade--how I came here
was the same way as weather,
a bemused breath stain, but liberation
let the bathrooms be clear.
Unfocused wolf-shaped lightning
over the beach air is the sauce.
Turn your head--freshness.
All night walk. Four or five hours
from a bus stop to bedtime
& that feathery pink smell of a KJV's
barely touched, crisp pages.
I drive my feet dreary. I'll walk
the round staircase, spin the knob it not
knock the door down.
Obsession bursts, my name naps
raining splinters or else,
what am I doing in super-blue
with these cottony glands?

Today's book of poetry thinks Terry's Aroma Truce is a conversation between Terry and himself.  Sometimes we need to give voice to more than one side of a consideration before we allow it to be real.  Terrell Jamal Terry reins in his discord with reason but these poems still burst at the seams with a tethered aggression.

Terry is too smart to let loose his hold completely on his emotions, even so these almost polite poems snap, crackle and pop with a dexterous intensity.

To deprive or provide the full disclosure
& afford a relaxed richness
of concealment. I'll write this:

here is a door; everywhere before was
& since is not. Save for me some
honest work. Tell me where we can live.

Maybe tomorrow. Come early--spelled
with my lungs. By late morning
what's beneath begins your only voice

in need. The crackle of that first word
& then more clean hope waking,
as the sores of scientific names slip

past the latch of meaning mistaken.
Voices in eyes wipe the slick moisture
to see what wasn't, to say I don't

see through, asking where is the kind light?
The plan is now a strayed leaf crumbling
in an unmade hour washed by the sun.

If the vulnerability of bare eyes requires
no protection, you may have to trust
as glass gets crushed in a garden of terrors

& treats each tragedy with equal indifference.
Did your kidnapped lover come
back? Where you rock-wrapped in pain?

They weren't taken away. Time unravels.
You've sat under a miraculous long shade,
your thoughts removed from cold violence.

Today's book of poetry's morning read was slightly delayed by an excursion by moi to another province.  Our one and only patron saint and benefactor, the beautiful and mysterious K, works in Quebec and bicycle season is now over.

When I returned to the office Charlie Parker was dancing around the place like he owned it.  Dizzie was on the box as well along with Bud Powell, Roy Haynes and Tommy Potter.  They sashayed around the place like they owned it.  Well, there was no way I could complain about that but we do like to have the morning read without distractions.  I promised my unruly minions that Dexter Gordon would show up following the read; Only Flight Up - "Tanya", parts I and II.  That did the trick.

"I got your texts.
They were odd with wild clarity. However,
I am tired in a tangent over a half-century
of technology I don't love or loathe.
I hear the molecules mule your mind.
You are as elusive as warmth in ice,
with your wet stars & endless jovial motives."
from "Wrinkled Respite"

Our gang ate them up.  Aroma Truce made for a very spirited reading from the minions.

Damn, we die.
I'm a few blocks from the biblical cemetery.

The water is warm
with quiet vagueness.

I carry a secret morality,
a homemade cosmology
in notebooks.

Compassion is a dirty word.

I'm more curious about
planting myself
& not being bored wet.

My thought are movies
passing the graveyard's vapid flowers.

When it's dark in the morning
I approach with desperate eyes.

Before I reach the tiny market
I'm tearing packages apart.

There's no need
for actual touch
on islands in the city

"I lose interest in sugar."
from "Limn"

Terrell Jamal Terry's Aroma Truce is strong stuff.  Death is such a staple that it frames almost every page but Terry is never morbid or lurid.  There's a haunting warning of the inevitable, of the maybe, maybe even of the hopeful.

Terry fights the urge to write flat out love poems but he springs a few longing/lusting moments at us that are both poignant and doomed.  He knows it.

Today's book of poetry thinks Aroma Truce is a stunning first book of poetry.  More of Terrell Jamal Terry is what the future needs.

BLURB
The poems in Terrell Jamal Terry’s Aroma Truce announce their arrival with language that is both instinctual and inevitable, “the same way as weather,” the speaker tells us in the opening poem. Each poem creates its own stunningly perfect world, yet somehow each of these worlds manages to open up and say something about the one we inhabit. Through this continual unfolding, this is a book for our time, a book of both “frail worry” alongside “stubborn hope,” a book that offers desire alongside what one might hope for others: “I would like goodness & to be good.”
—Adam Clay

An auspicious and powerful debut, never satisfied with the seam between the spiritual and the sensual, the anecdotal and the merely true. “Don’t guess,” Terry admonishes—indeed, every line of these poems feels hard-won from the guesswork of experience and language. “Do I go too far / with this?” Terry asks; “That’s not everything. / Animals & rain. My body, it stings.”
—G.C. Waldrep