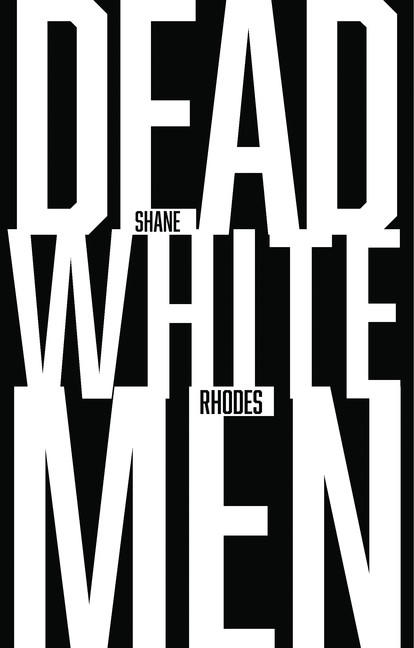 Shane Rhodes is swimming in some pretty deep water.  Today's book of poetry found that Shane Rhodes "Notes" at the end of the collection were very helpful when considering his poems.  We want to share them here:

"Early European narratives of exploration and contact with the 'New World' often intertwine the languages of scientific discovery and colonization and bring along with them all the attendant European concerns of race, commercial exploitation, and male domination over muted landscapes
and the peoples who inhabited them.  In writing and researching Dead White Men, I was interested in looking to these past stories (especially those focused on North America and the South Pacific), not to add to the fictions of past white heroism but to better understand the problematic relationship between the stories, the mythologies they have become, and the lands and peoples they describe.  For many settlers, our understanding of the history of the land upon which we live is often limited to the names that have been given to it by past white explorers and the mythologies we have built up around exploration and discovery.  I wanted to use poetry to interrogate this past and the texts upon which it rests.

So, Dead White Men, what is it?  This is a rhapsodic blend of William S. Burroughs style cut-ups and concrete poetry served up within a ballistic barrage of indictment against the status quo of white colonial power.  That and it fits between the covers just like a regular book.  Shane Rhodes isn't your run-of-the-mill poet, Dead White Men is not Milk and Honey.

Little flames, fixed fires
that certain men give out
when walking
or when silk garments are donned
in a very dark chamber.
Latent in the livid integuments,
it is a difficult thing to be known
even with electrophore
of dried nerve and bone.
Upon the caloric animalcules
dissected, I employed
an electrical machine
so that an eel, if bisected
transversely, trembled its tail
when a metallic arc was applied.
With current, a frog (hook secured
to its spine) jumped vigorously about,
while the wings of a chaffinch
slightly contracted.
Even stricken with a pinch
of pear powder or pernicious gases
(sometimes mephitic, sometimes opium,
powdered nicotine and arsenic),
a newborn cat moved its legs --
a phenomenon not lacking
with the head cut off.
Vipers have not yet been tested.
From the house high in the air,
we erected an iron wire,
hung upon it prepared frogs
and the legs of warm animals.
The thing went according to our desire.

Canada has a great deal to do to undo and even more to make right with our First Nations.  Rhodes uses a wide brush to capture colonialism and the snakes of its progress beyond just the Canadian home grown variety.  Today's book of poetry are big fans of Rhodes, although he is more work than your average bear.  We wrote about Mr. Rhodes X back in November of 2013 and you can see that blog here:

Our morning read here in the Today's book of poetry offices was an almost sombre affair today, not much in the way of chucks and giggles in Rhodes incendiary condemnation.  But just to be clear, this is not your typical Sunday drive poetry fest, before it's over you'll find yourself upside down and backwards.

Today's book of poetry has to admit that there are often books of poetry that intimidate my intellect and understanding and Dead White Men is one of them.  That doesn't mean it wasn't riveting, it was.  And even more importantly Today's book of poetry believes Shane Rhodes is bleeding some necessary blisters, opening some festering wounds so that they can drain and heal.

White privilege has always extended to our histories, the way we write about our past.  Essential poetry like Shane Rhodes Dead White Men is another elemental step towards narrowing that damned gap.  White privilege will only be disassembled when white people recognize it exists and start measuring the costs.

More Translations of the Lappish Language

Their Words for Sounds

: an animal in the water splash

: a bow when the arrows are shot out

: knocking as I roll down the hegyrs

: an empty vessel when tapped by two empty containers

: water falling in a fire

: sand between your teeth or a ball stuck in a tube

:  a dog that flatters

: sometimes here this sound when the larynx nip slips

In the interest of full disclosure, Mr. Rhodes and I know each other.  You could even say we are friends.  We don't chum together but their is a sizable mutual respect, I hope.

ABOUT THE AUTHOR
Shane Rhodes is the author of five books of poetry, and has won awards including an Alberta Book Award and the National Magazine Gold Award for Poetry. He lives in Ottawa, Ontario.

‘Dead White Men is not only a searing indictment of colonialism but also a painful reminder of the violence that underpins the logic of exploration. Each poem strikes at the heart of the issue: there are often unarticulated, unacknowledged Indigenous presences here that have been flattened over by the lies and mirages of empty landscapes. Dead White Men is a stinging and difficult journey, and one that continues to remind us that stolen land has always been the most pressing concern for Indigenous peoples and settlers. This is an absolutely essential book.’
– Jordan Abel, author of Injun