Why am I not surprised when "Caligula and his freak show" show up in the nightly dreams of a young Catherine Owen?  Ms. Owen likes to give us the impression of a bookish youth full of church going Sundays and tempered innocence - but we are fairly certain she has "burn it down if necessary" tattooed on the insides of her eyelids.

Dear Ghost is a more mature voice from the irrepressible Owen.  This Owen, four years later, is more contemplative than reactive, more deliberate than spontaneous.  The resulting poems still vibrate with her tangible energy and intelligence but Owen's focus has tightened.

What I Remember About What We Weren't
Allowed in Childhood

Pop-Tarts certainly. Anything processed. The worst being hot dogs
which I gobbled once guiltily at the Stardust roller rink at thirteen
and puked, imagining entrails in my intestines. Condiments. Definitely
not on the acacia table in gauche plastic containers.
And Halloween candy was entirely out. My father shifting
through our sacks for all but the Glosette peanuts and Sun-Maid
raisins that, rationed, we were able to gobble over later weeks
to flee the dreaded sugar rush. Mostly all not carob or bean sprouts
or hard-boiled eggs were verboten. And then too there was no Happy Days,
never Knight Rider or The Monkees except when we snuck them
at Nana's by lying to her and after she would always exclaim
- "You pulled the wool right over my eyes!" So, aside from educational
programming, the small B & W stayed dark while we clicked Meccano
bits together, read the Brothers Grimm or played doctor with toothpaste.
Absolutely no Barbies or anything that would break, rot our teeth,
show us a false world in which dolls sport slip-on pink heels
and grown men in leather jackets say "Ehhhhh!" Only the dentist
could give us video games, hand-held Donkey Kong and Frogger
while he tightened our headgear, pain overwhelming the transgressive
pleasure and we couldn't say we didn't believe in God.

This past weekend Today's book of poetry read about a publishing record set by a Canadian poet, this article was in the Globe & Mail.  The poet's first book just pushed by 2,000,000 in sales.  Simply astounding.  I saw this young poets work in a globopulous bookstore recently.  Most of the bookstore was given over to the selling of various other products ranging from chocolate to computers to decorative rocks.  I spent a few minutes reading the poetry of the young superstar, well, she calls them poems.  In the Globe & Mail article it was made clear that this young woman, the current best selling poet in the entire English language, best selling by a factor of at least 10X, meaning that her current book has sold ten time more copies in the last year than any other book of poetry, ever, doesn't read.  She does peruse covers though.

Catherine Owen, on the other hand, is a big reader.  You can tell in every poem she writes that she has read.  Today's book of poetry has yet to meet Ms. Owen but it is easy to see, feel and hear the influence of other poets, it is a tangible thing.  Owen even gives us an "apprompted" poem which has verses that start with a line of poetry by Sharon Olds.  "Apprompted" is a term borrowed from Kimberly Gibson's paper Lines by Someone Else: The Pragmatics of Apprompted Poems written for Ms. Gibon's thesis at the University of North Texas. Owen's poems Two Stanzas on My Father Begun by Sharon Olds and The Journal of John Berryman From 1948 to 1971: A Reverse Glosa of First Lines are all the evidence we need of Owen's direction and intentions.  Owen has nothing but respect for the long line of poets who have worn down the path before her.

Just The Way Things Are (He Said)

That day at the tracks was overcast.
We cheered for a filly called Morning Coffee
and then Swagger Cat went down and had to be shot.

At the pub, the dealer wore a bandana beneath a dark fedora.
"It's the law of supply, you know," he said.
Two men played soccer in the cemetery beneath the train,

white ball pinging off the old grey of graves.
The horse went down as it graced a curve with its hooves,
and when it tried to rise, its leg was a shred of skin.

At the Met, the dealer moved a scrim in front of it
and slowly the hearse that smelled of hay drew towards us.
A ball bounced between our tables on which were placed small

shooters of blood. "I clean my asshole with Baby Wipes," the dealer
piped up, "that's the kind of pure guy I am." Graves took on the rain again
as they had for the past century. At the track, the crowd gasped,

briefly, then pretended their vision of glory hadn't
just been shattered as #5 racehorse was loaded cold
into the law of demand.

Another thing about Catherine Owen is that she is getting better with every book and that is an exciting poetic prospect.  If Owen is this good now, and she is, how good will her future books of poetry be?  Today's book of poetry has little in common with Owen, not gender, musical taste or propensity for excitement - but what Today's book of poetry appreciates is that Owen doesn't seem to be able to write a boring/bad poem.

She catalogues her hopes, dreams, failures and success but never without suitable acoutremont, Owen's poems always come dressed for the dance.  It's not what Owen talks about but how.

Today's morning read was a little quieter than usual as were missing several of the usual suspects.  Our office was light on the ground for readers this morning.  Those of us who were present gave Dear Ghost the robust read it deserved.

But since I don't understand myself, only segments
of myself that misunderstand each other, there's no
reason for you to want to, no way you could
even if we both wanted it.
JOHN ASHBERRY, "A Poem of Unrest"

1.
So I sit in my happy face socks being maudlin.
If there are still voodoo dolls in this age of Barbie Almost
Becomes President, someone bought one with my aging mug
on it and is plunging pins into its batting with glee.
"All I know is, it's Wednesday and I'm going to work." the harried
blonde barks into her phone at Starbucks. Knowledge: a severely

2.
abridged edition. Yes, I'm aware you don't love me. It's OK, says my mouth
while my psyche has issues with loneliness. Holding hands is gross; hold
hand with me in public! Multiple personalities of the somewhat-busted
heart, though few come as close to sorrow as Jerry the Boxer -
"I'm just an old dog," he admits. "but someone should cuddle me at night anyway."
Alright, listen. Every onesie in the universe won't

3.
make us whole again and when being spat on "a compliment, girl" then there
will be fewer calls for tables d'hotes and strolls on the parapet my moonlight.
Of course gender is my obsessive topic and how people deal with death.
Not much else but sex and flowers and your final instructions on a 3 x 5 lined
recipe card that you are sorry you haven't covered all costs, we can sing
the requiescat and you want the casket closed.

Catherine Owen is building a reputation as one of the better young poets in Canada.  Dear Ghost  will only enhance those prospects.  This is the good work we've come to expect from Catherine Owen.  We will be expecting more. 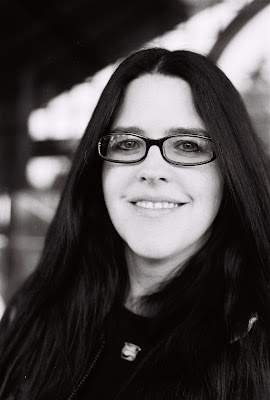 ABOUT THE AUTHOR
Catherine Owen is the author of ten collections of poetry and three of prose, including her compilation of interviews on writing called The Other 23 & a Half Hours: Or Everything You Wanted to Know that Your MFA Didn’t Teach You (Wolsak & Wynn, 2015) and her short story collection, The Day of the Dead (Caitlin Press, 2016). Her work has been nominated for awards, toured Canada eight times and appeared in anthologies, as well as translations. She has been employed by both the Locations and the Props department in TV land, plays metal bass and has two cats: Solstice and Equinox.