Today's book of poetry:
Real is the Word They Use to Contain Us.
Noah Wareness.  Biblioasis.  Windsor, Ontario.  2017. 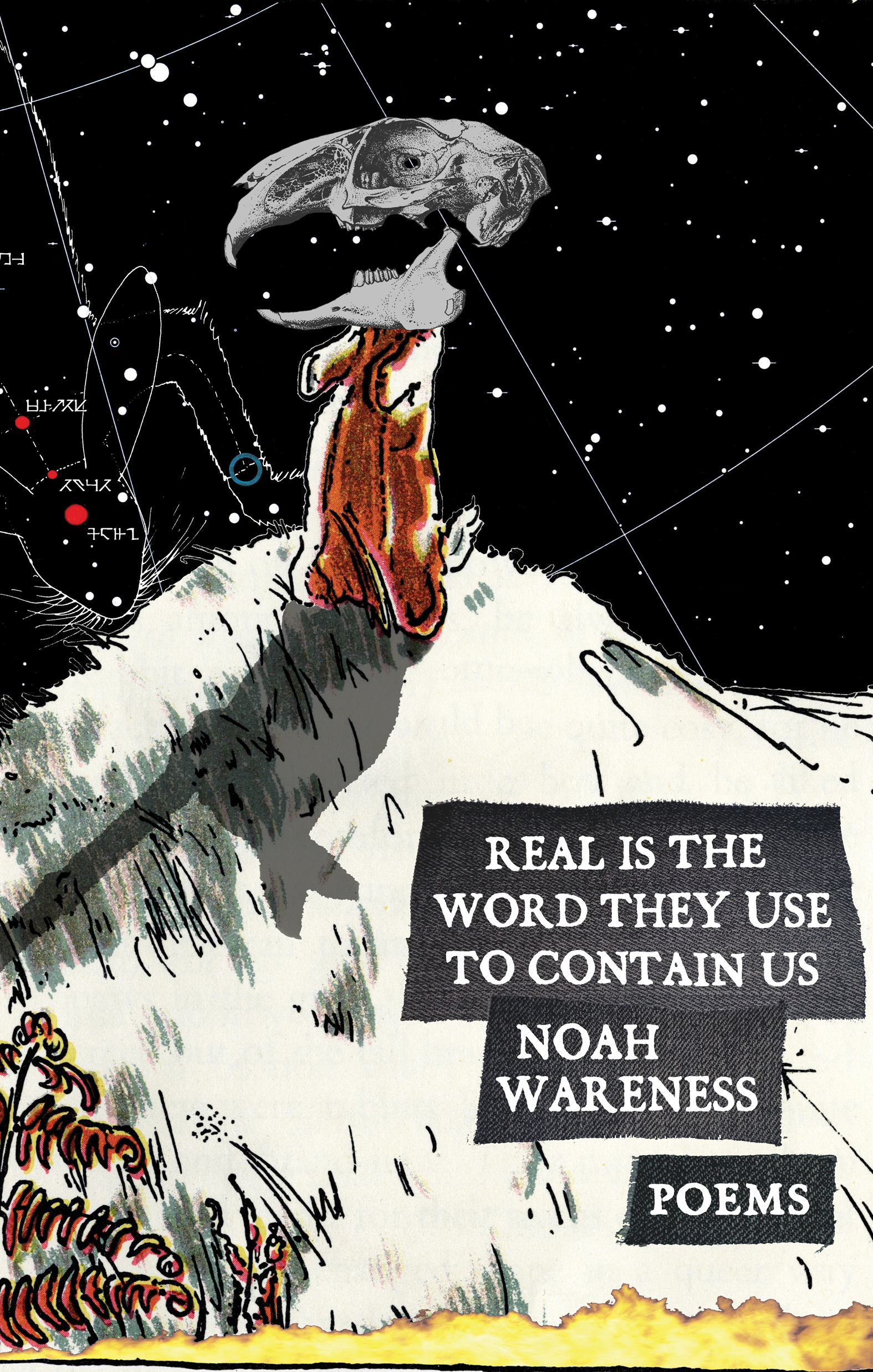 No idea who Noah Wareness really is but that's one hell of a pseudonym.  Today's book of poetry is fairly certain there's a man behind the curtain controlling all the levers like an all-seeing Wizard of Oz.  Noah Wareness is a great pen name.

Opening up Real is the Word They Use to Contain Us is a little like listening to Richard Pryor for the first time all those years ago.  I was working in a small movie theatre that was on the second floor of an old building in Peterborough.  There was a boxing club on the first floor.  We showed a real variety of flicks.  You also never knew what would be playing on the box between shows.  Never did find out who owned the records we played but that's where I first heard Paco de Lucia.  That's where I first heard Richard Pryor.  I remember it clearly because it flicked a switch.

These are truly great poems, stories, bribes, menus and memos for the cleverly deranged.  Real is the Word They Use to Contain Us is as much a manifesto as it is a book of poems.  These poems are a declaration of war in a battle most of us don't know is being fought.

Noah Wareness is cavalier, candid and so damned sharp that there's a genuine fear of cutting yourself on his wit.

but I heard the physician Duncan MacDougall
devised a sensitive platform-beam balance
to weigh terminal patients as they expired,
eventually placing each departing soul between
eleven and forty-two grams.
I'm no expert, but
I've got a bathroom scale, and I read it before
I sad down, you know? And when I stood up
over a pound had vanished. I'm no theologian,
but I've certainly weighed my share of turds,
an experiment most anyone can replicate.
You sit
and think about Plato dividing the soul: reason,
volition, desire: three perforated squares.
Later theorists added compassion and stillness,
microtubules, parallel processing and generative
grammar; but in 1911, in his backyard garage,
MacDougall built a transcranial camera to catch
every last detail staining the bowl.
Nobody'd call
me an engineer, though. I don't know the weight
of compassion, or what might foil its tendency
to rise.
Don't ask me why corn kernels float.

Real is the Word They Use to Contain Us genuinely does not read like any other of book of poetry I have ever encountered.  Noah Wareness writes with a strange lyricism somewhere south of a ranting Nick Cave and north of the razor wire strung out by William S. Burroughs.  And he does it with some sort of hyper stream-of-consciousness and the extracted musk glands of honey-badgers.  Wareness is relentless as he dive bombs down on the assigned targets with his massive artillery.

It is hard to narrow in on precisely what it is Noah Wareness is running toward but the trip is the thing and Real is the Word They Use to Contain Us chases you like a bull breathing hard on your blistered and bloodied feet as you search the maze for daylight.

Today's book of poetry could have used a Sherpa to help navigate some of this terrain but just when the air gets too thin and the load gets too heavy Wareness comes along with something so beautiful, wise, alarming, exciting or illuminating that it lightens your load, solves your concerns.

welcome to the smoking
industry.
it's not what you
think. it's worse.

all those
iphone 6
motherfuckers
at the bus stop
doing streaming
video,

and white
clouds in the office
windows
overhead
clearing up
one by one.

now we're working in
rented port-a-
potties. the
big ones you can drive
a wheelchair in.

your bachelor's degree? it's
a piece of paper.
welcome to the smoking industry.

four, five of us smoking
in a green plastic
shitter
behind a horse stable
only we're still
artists,
artisans.

in these suffocating
boxes there's
no lights
ventilation
water
or electricity.

you can's see your hands.

and when the cheques
come they're typed
on the thinnest paper
basically kleenex.
pissing blood
after a long day's
smoking
and the cheque's ripped,
you can't
read the numbers
then plus there's the
sixteen-year-olds
who hitch here in freight cars,
all clown paint and
brandishing cleavers,
they show up
around sundown
like a teen vampire movie
and they don't stop singing
the same song.

ROCK ME MAMA LIKE A WAGGING
WHEEL, ROCK ME, MAMA, ANY
WAY TIME TO FEEL, HEY, MAMA,
WAKE UP AND ROCK ME

ROCK ME MAMA LIKE A WINTER'S
TURNING OF RAIN, ROCK ME
MAMA ALL DAY IN A TRAIN, HEY,
MISTER, YOU GOT A SMOKE

and every one
of
them, in between
the checkings
of their phones,
will ask
to bum a smoke.

they got on emergency
psychiatric welfare by
cutting
GODSPEED U BLACK
EMPOROR
in the ikea coffee
tables
of their mothers,
and they say they stopped here
to bum a smoke.

they say that's the only
reason they stopped here.

rookie,
this is it,
the smoking
industry. and

fuck not being able
to read
cause you had one ordinary stroke, fuck
mirrors cracking when
they look at you,
fuck dropping bread in the toilet,
fuck
warning labels
getting bigger every morning,
fuck
trying to use
a toothbrush when you
have oral
cancer, fuck the
exchange ratio,
fuck
burn marks on my air
fresheners, fuck the emergency
tracheotomy industry,
fuck
being forcibly restrained
and prevented from
smoking
at your own child's sleepover,
fuck tar sticking your eyes shut,
fuck
stepping outside
for one minute
and birds hitting you in the chest,

fuck whoever came up
with the name noam chompy
for a dog,

FUCKING KIDS
GET OUT OF MY OFFICE
WITH YOUR RUBBER BAND
TOILET PAPER
TUBE
GUITARS.

okay.
welcome to the smoking industry.
here's
your gun.

it probably won't even go off.

Just following Noah Wareness through this labyrinth of poems, prose poems, connecting passages, asides, contracts, pamphlets and other assorted paraphernalia is a quest.  But rewarding at every turn.  You can't have poems this incendiary without making some burn holes in the carpet.  Something is going to spill over.

At this morning's reading we noticed the door to Max's office open and "gone fishing" sign on his desk.  Not sure where he has ventured off to but we will keep his office just the way he likes it.  The rest of the staff tackled Real is the Word They Use to Contain Us with considerable gusto and aplomb.

Today's book of poetry understands that Noah Wareness is an outsider poet; unaligned to any isms and with a big tongue in his cheek.  We won't even pretend we were prepared to deal with a poet of this nature - but boy, oh boy - we were damned happy to take a kick at the can.  Originality is rare as hen's teeth and Noah Wareness is one of the most original voices we've encountered in a good while.

The words are the power the words would destroy.
Now it's December, I wrote about this park already,
the powder snow streaming over the walking paths,
blowing in ribbons, billows, all torn kitecloth trailing,
revealing in its traces the soft flank of the wind.
It isn't a sign. It's not the wind's mixed metaphor.
The wind ins't the snow's; and nothing's ours, too.

Either way, now it's March. On Highway 17, Emese
calls them snow snakes. Our tires run them down.

There's nothing in this frail little magic, not to hold,
no stone for power's throat. We ask the words for
true and false, the power the words would destroy.
It's just how seeing makes more seeing, this mind,
ours, running up to itself with shapes in its mouth.
The world's netted through with words, whichever
way, but always too fine to catch nothing at all.
When I finish this page, it was raining instead.
Either way, it's past four in the night. It's not now.
The wind's come looking back like something else.

It's not very often a book like Real is the Word They Use to Contain Us comes along but when they do it is cause for celebration here at Today's book of poetry.

Not only can Noah Wareness cook with elan, he's added some new and pleasing spices that were entirely new to our palate.

Today's book of poetry
thinks this might be a photo of
Noah Wareness.

BLURBS
"...something approaching genius... every word from the stage was a perfectly-shaped bullet..."
-  Michael Rowe

"Reading this book will make you see the world a little differently."
-  Zachariah Wells