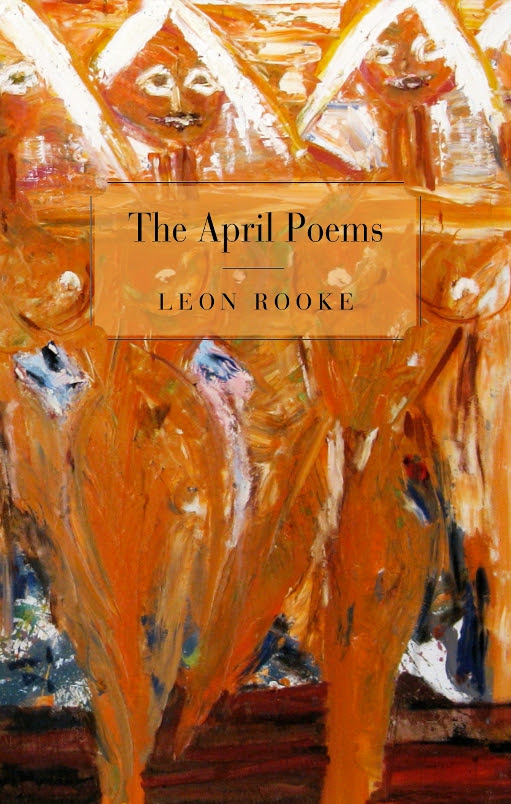 Leon Rooke's The April Poems are a bit like walking into a batting practice with the home-run champ.  Leon Rooke's free verse musings on April explode off of the bat with the confidence of someone who always knows where the sweet spot lays.  This guy is used to knocking them out of the park.

—What was it that attracted you to April?
—How I was made dizzy through love. How I came
to see beauty in the strangest things. How modern art
suddenly made sense. Her pluck, her prink, her plumelets.
Her elegant feet.
—That's it?
—Clothes on the body, then the floor. I was eighty miles
away and saw her naked in bed. She was saying smart
things. I licked blue plates in cheap diners, thinking of her.
Knowing that she was smarter than me. She was an
intellectual colossus, big, big, and bigger. Call her up, you
got busy signals, you got guys from Nantucket, Singapore,
the Darwinian Isles. Because of her I could speak the
language of wild dogs. Gypsies jumped from blackberry
fields, shouting her name. Bees sacrificed their own air time
to fly with her. Even wasps.
—What was it about you that made her keen?
—She liked digging me out of holes, where insects
buried me. I introduced her to invisible birds which made
nests out of her hat bands. I was a man of action who went
out nights in a flying suit, in dyed underwear, stopping trains
that otherwise would crash. I diverted streams so they'd
trickle by our bedroom. I was savvy in the kitchen, slicing
beets. I was a brave son of a bitch in the workplace, turning
hot-headed thugs into limited-edition songbooks, Fords into
schooners on Lake Huron. I enacted legislation making
Mother's Day an extended foray through Greek isles.
—So you're saying your marriage worked out?
—Like the beauty of pure math. What did she say?
—Like juggling bricks in a hurricane.

These poems abound with joy, passion and humour.  In April, Rooke has clearly found his muse and it really doesn't appear to be the cruelest month any more.  Lucky for us.

April ran a tulip posy into the end zone,
taking rank with the Packers man, Al Carmichael's
longest kickoff return, 106 yards in 1956. Good Friday,
I think it was, and predicted in the gospels.
That she did it pulling a wagon stacked
with broken furniture from St. Vincent de Paul
does not diminish the noble achievement,
given that 200 warriors from the Sioux nation
were dead-level intent on scoring her hide
with flaming arrows.
At the 50-yard line she paused to deliver
triplets seeded in gods knows what awful place.
In the end zone, game-winning touchdown
against clicking seconds, she did the usual jig,
thumping her chest while executing cartwheels
her tulip posy riding a wind into the uppermost
balconies where we sat grooming, saying to each other
what can you expect from a bunch of Indians.

Rooke is a free range kind of poet as The April Poems traverse football fields, Edgar Allan Poe, God's Haircut, Henry James and Walmart.  But with a maestro at the helm — these disparate stories meld into a narrative that if not familiar to us all, is certainly enticing.

And Henry James was weeping.
He was gushing tears,
Bright on his flushed cheeks as tiny marbles,
Having put to bed that minute
Tears of the Ambassador.
A young beautiful girl strode in
And said to Henry James
Seated in an English chair
By an English window:
Why are you crying?
Henry James said,
I am not crying, point of fact.
I am weeping.
April said. That is so cosmopolitan
It is almost divinity. But what
Is the diff?
Go away, said Henry James.
Return to Nebraska. Today
It is not my pleasure
To dispense sachets of sweetness
To American idiots.
April flung the English curtains
From the English window
As Henry James sat brooding.
My birth was in Manhattan,
Cautioned April, though I am now
Merrily Canadian. Or soon to be.
I have recently fled the arms
Of a famous, utterly experimental,
German novelist. I am
The baby in the family,
As was Gertrude Stein.
Dry your eyes, please.
I must see you clearly.
I like your new book's title.
I may enlist myself as your ambassador.
Henry James ceased his weeping.
I stand corrected, he said. Scant is the diff. Let's have tea.

Leon Rooke is a Governor General's Literary Award winning novelist, a member of the Order of Canada, winner of the Canada/Australia Prize, the W.O. Mitchell Literary Prize, a CBC Fiction Prize and in 2012 he was the winner of the Gloria Vanderbilt Carter V. Cooper Fiction Award.  Whoosh.

Leon Rooke's The April Poems were a perfect Boxing Day treat for me.  Refreshing, original and digestible without being overly stuffy.  Even a sweet aftertaste.