I don't know yet if Puma Perl is my new favourite poet, I'll have to read Retrograde a couple more times.  And I will definitely have to find her other books.

For Retrograde you'll need your seats in the upright position and you'll certainly need your seat-belt. Some of you will need helmets.

I haven't felt this way about a book of poems or a poet since the first time I read Charles Bukowski back in the 70's.

I was living in Edmonton, Alberta, with Blanche Dubois and I was working as a dish-washer at a jazz club, The Palms Cafe.  I found Bukowski at the Edmonton Public Library.  Got on a bus to head home and didn't lift my head until I'd read the entire book.  I'd gone the entire bus route and then some and was further from home than when I had started.

This is blog #324 and I've pretty much used up my accolades  -  so you might have heard some of this before.  This is one of the strongest, most surprising, and sublimely splendid collections of poetry I have ever read.  It comes on like a sledgehammer breaking down your front door.  Sublime yes but this is never subtle, Perl grabs the reader by the collar or the hair, whatever she gets a hand on, and pulls you into her world.  And there is no boundary she won't happily piss on just to see the splash.

She fakes orgasms
with herself
just to get it
over with,
hopes sleep
will come
dreamlessly.

The sun
does push-ups,
fantasy runs laps,
the moon exploded,
hours knock
on windows,
she sleeps
in daylight,
night waits.

She fakes orgasms
with herself.

Retrograde drew gasps from several of the interns, along with several red faces.  This is not your grandmother's poetry, it in not MFA in creative writing poetry.  Perl is completely fearless and does not depend on the opinions of others, men or women, to define herself.

These poems howl haughty, they are the knife edge of feminine power, self-determination.  Perl could care less what the quiet tide sounds like, these poems scream with scatological harmony and never lack for dark beauty.

These poems come off of the page like white lightning.  Hard and hot and almost unpalatable on the first swig.  But from that moment of conversion on -- you are either a convert or out of the game.     Perl swallowed me whole like I was taking communion and I imagine she'll have the same effect on most of you.

Some night my man is a stranger.
He hides behind his big hands
and deep eyes, burns orchards
as I sleep, his thoughts drill
holes in the sheet, dreams move
in orbits along the same path.
I forget to remove my bracelets,
they turn to steel, I don't know
whether to slap him or fuck him,
it all feels the same, the bed
crashes into the wall, encounters
are never delicate, somewhere
a door slams shut, the morning
is clear, he hugs the pillow
as I leave, I crawl back
beneath the covers and he
returns, like surrender.
We draw closer as we sleep
until the invasion resumes.

Puma Perl just kicked the crap out of my expectations when I opened Retrograde.  I always hope to like the books that publishers and poets send, I want to admire them all.  Puma Perl is a poet who will now be part of my ongoing poetry conversation.

She is someone like Sue Goyette, someone you simply HAVE to read.

There's an uprising in the bedroom.
Machine guns rattle in his chest.
He sleeps.

She wears her red lace push-up bra while she fucks him.

It's time to leave.
He sleeps.
Quietly.
She locks the door behind her.
She's done.

Today's book of poetry admires smart and Puma Perl is all over that.  We like screaming hard electrical jolts of neon truth and that is Perl all night long.  And we have all the time in the world for brave.

As Andy Griffith said in that old movie: "It ain't braggin' if you done it."

Puma Perl's Retrograde is as exciting as any book of poetry I've read in a long time. 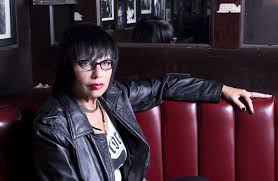 ABOUT THE AUTHOR
In the mid-70s, Puma Perl happened by the Nuyorican Poets Café on its second night of existence. Along with countless other Lower East Side residents, she discovered that the transformative power of poetry and performance was accessible to her, regardless of class and academic achievement. Decades later—still living in New York City—she is a widely published poet, writer, performer, producer, and photographer.

Puma is the author of two chapbooks, the award-winning Belinda and Her Friends and Ruby True, and the full-length collection knuckle tattoos. Her poetry and short stories appear in numerous journals and anthologies including It’s Animal but Merciful (great weather for MEDIA, 2012), The Understanding between Foxes and Light (great weather for MEDIA, 2013), Maintenant, Rattle, The Chiron Review, Have a NYC (Three Rooms Press), and Bullying: Replies, Rebuttals, Confessions, and Catharsis.

She was the co-creator, co-producer, and main curator of DDAY Productions which mounted shows in many New York City venues and highlighted emerging artists. Her newest venture is Puma Perl’s Pandemonium, which brings together poetry with rock and roll. As Puma Perl and Friends, she performs regularly with a group of excellent musicians. She continues to be transformed.


BLURBS
Puma Perl is a remarkable poet and an exciting performer. Her works in verse are packed with riveting details of modern life and chronicle her unrelenting resistance to the way things are or meant to be. Retrograde is a true contemporary masterpiece.

Perl reminds me in some ways of Ginsberg. Both weave the immediate into their work as documentary evidence. Both have a desire to somehow sing to an audience of their peers. Both have motifs…talisman symbols that speak to core experience. Ginsberg returns again and again to his “clock of meat”: Perl returns to her knives, honed and handed over in tiny, sharp cuts of poems (“Do not believe / my spoken word, / read my scarred / letters, they crawl / down my arms / like predators”) and to the vital squalor of LES apartments (“I don’t sleep on the floor any more. I’m too old to crash on moldy blankets, bodies of strangers on either side, sounds of wet fucking, smells of beer, blood and vomit.”)
—B.A. Goodjohn, Mom Egg Review

Absolutely gut wrenching, achingly beautiful. bittersweet and painfully true. Puma seems to have written this in her own blood not from what bled out but from what she ripped out from deep inside. You will recognize yourself in this book. She makes no observations, she relates experiences. She runs the gamut of hustling, scoring, cooking and shooting, the beauty and ugliness of the high and fall, and you begin it all again but never told as a victim only as a survivor and winner.
– Guido Colacci, Steel Notes Magazine

Retrograde is a true rush…An extremely authentic and unsentimental look at the gritty and dangerous New York that has since been glamourized, mourned and burnt beyond recognition into the realm of cultural mythology.
– Scott Stiffler, The Villager.

The book is for those who do not wake up screaming, but wake up wanting to scream…The poems span everything from years of addiction, long ago, to the now where there are “social media” and cell phones. It is a a world where “it is always sometimes, never forever”: as it has always been, it’s just a world where it is more glaringly obvious.
– David McLean, Autoerotic Elegies

Puma’s writing shoots straight from the hip or straight to the lip, powerful, honest and to the point. Her writing hits home, and often conveys things most people are too unaware or afraid to admit.Puma pulls no punches, telling tales of self-destruction as a celebration of life until way after the party is over, and somehow being graced with a second chance to survive. Don’t try this at home.
—Iris Berry, publisher, Punk Hostage Press

The collection moves through time, whether it’s looking toward a dangerous past, a muddy future, or a bleak present; it is a study in how humanity changes yet stays stationary. Perl draws divine inspiration from Elizabeth Bishop, as the sense of loss permeates between every line, syllable, and period…The book is void of bullshit, portraying American city life in all its unglamorous, gritty glory.
— Joanna C. Valente, Luna Luna

There is regret and deep disappointment in these pages, lurking but not hidden beneath the swagger of gritty urban attitude, the haze of cigarette smoke, and the back-of-the-water-bill list of pointless sexual encounters with boys who think they’re badasses…Retrograde is a brilliant title for this book, referencing that relentless forward motion that seems to sometimes reverse in both appearance and reality.”
—Eric Paul Shaffer, The Pedestal

With words that hit like hammers, these poems bring us into a New York City of speedballs, broken windows and fast encounters. There is also ginger tea, soft sleep and yearning. You may have been here—I know I have. And if you haven’t, the raw emotion in Puma Perl’s free verses will transport you.
—Thaddeus Rutkowski, author of “Haywire”, “Tetched” and “Roughhouse”

These poems make me cry and want to punch a wall. They bring me to that place inside where the darker hours loom. Puma Perl takes us on a trip through our interiors piecing together the moments we wanted nothing and everything at the same time. Her mastery shines when suddenly a word or phrase sparks a laugh, daybreak comes, and she (we) steps out triumphant.
— Nicca Ray, writer

Puma Perl writes with dagger to the heart directness. Dreams merge as she borrows from pain to understand her strength and purity. This warrior leaves me grinning and a little wiser.
— Zoe Hansen, writer / artist