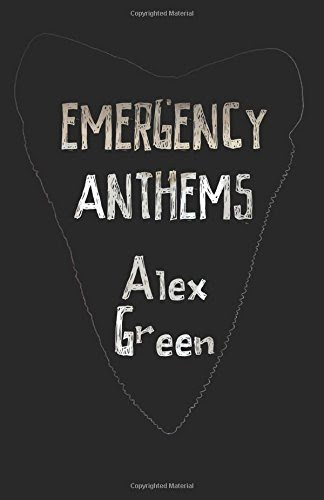 This book could walk on water.

Today's book of poetry was re-reading Emergency Anthems in bed last night and screaming out loud as a result.  Luckily K was awake because there was no way she could have slept through my repeated exclamations, shouts of joy and wonder.  How in the hell was Alex Green touching nerve endings I didn't know I had?

K could see and hear my obvious delight and excitement and asked me to read one aloud.  I gave her "The Wide Gates of the Lowlands" and she was hooked, she sat bolt upright in bed and said "I have got to hear another."  I hit her with "All Night the Airfields, Amy Winehouse" and that was it.  K was in, she gave me carte blanche for outlandish displays and loud retorts.  She was amazed too.

It's what David Porter, in his very worthwhile review of Emergency Anthems at Amazon.ca, says, "The best poetry reads like a secret language in which you are already fluent."

On the news you never hear about someone who is good at
karate saving the day; banks get robbed, cars get stolen, buildings
explode, but no crime ever gets derailed by a black belt who can
kick the air into stars and snap limbs behind his back. Once you
signed up for a martial arts class, but in the first few minutes you
tore your groin so badly you felt the muscle split from the bone
and orbit violently below your abdomen. In the car, the pain
vibrated in the new pocket of empty space. When you got home
you needed the retired magician with emphysema to help you
out of your car and into your house. You feel asleep on the couch
to a cooking show in which everybody cheered when alcohol
and cheese got added to pasta sauce. When you woke up, the
magician was still there, sitting next to you and passing coins
over his fingers; you watched the silver rise from nowhere, stand
up like wheels, and roll down his wrists, moving to the best of
what little breath he had left. You could hear how the gears of his
lungs had snapped and were gone--you imagined them wet and
frayed, dangling over the boneless galaxies of his throat. There
was dried blood on the wall, the lights kept flickering and you
were sure you would never be amazed by anything ever again.

All hell broke loose at our morning read.  Milo phoned three friends, Kathryn called in reinforcements.  Now all of them are in the back room reading Alex Green with a megaphone Milo made out of my desk blotter.  We are going to need better locks on the doors.  Milo and Kathryn insisted that their friends votes should count, the consensus was we hadn't seen a book we liked more yet this year.

I first read Nicanor Parra's Emergency Poems (New Directions Publishing, 1972) back in the late 70's.  It's been a cornerstone book ever since.  I'm here to tell you that Alex Green's Emergency Anthems is a book I will return to for a long, long time.  Once I love something I love it forever, if I can.

Green has the surgeon's scalpel, the laser touch.  He consistently cuts closer to the bone.  These prose poems are uncanny magic.  In Green's universe there are archetypes and certain seasons that shape the tides of men.  There are sharks and Captains and the end of summer is always looming -- and we feel it all as a new familiar.

Everybody knew the magician was dying and this would be
his last party. All of his ex-girlfriends were there -- even Stacey
Mitchell, the news anchor who he had lived with on a houseboat
in the '70s when he held his breath for the whole summer. Today
he was taking requests. He would make birds explode from his
chest, he would steal wallets from anyone in the room, he would
build a house of cards on the back of his hands. All anyone
had to do was ask. But no one did, because they were sure he
would crack in the middle, fall to the floor, and leave something
suspended they could never fix. So instead of magic, he sang an
old Nathan McCoy song about losing something in Hawaii. He
had a falsetto you could feel across your shoulders. His hands
were thin, he hadn't slept in two months, and you were the only
one who knew that a few weeks earlier he had parked his car
somewhere and lost it. When he was too sick to come out for his
own garage sale, he told you to give everything away. You watched
people take his couch, his television, his doves, and you felt like
you were officiating a slow robbery. If you're a decent magician, he
once told you, when you die people will miss you. But if you're a really
great magician, they'll always think you're alive and in the middle of the
best trick of all time. Even though you watched him fade in front
of a machine, heard his breathing disappear like a radio station
slipping off the air, you still look for his now. In the eyes of the
teller at the bank, in the stands at minor league baseball games,
in the credits of independent movies from Iceland. The only way
to be sure is to look everywhere.

These novels disguised as poems read like insights in an autobiography you are part of.  Green's personal universe is filled with symbols we somehow recognize, his sad songs a lament so familiar it sounds like an echo.

Green has a Bill Hicks funny bone and a Raymond Carver brain.

When the guy with the gun ran into the restaurant she owned,
stole a strawberry danish, and shot his head off in the women's
bathroom, you stood around the body unsure of what to do
with your hands. The man with the beard and the hat said he
had known a little bit about him, told you he'd swallowed glass
at a party once to prove a point. What was the point, she asked.
Just chewed it up and swallowed it while everyone watched, he
said. What was the point? she asked again. It's probably still in
him, he said. The the police came and did quick math around
the body, all the while not looking worried, as if the seriousness
of a thing depended on how long it took to clean it up. Later,
she closed the restaurant and the two of you sat around the big
black table in the back. She was sad about the man and you were
sorry you had nothing clever to say about dying. On the news a
boy broke a record by skipping a rock thirty-four times, baseball
players were traded for other baseball players to be named later,
and the weatherman you went to high school with said the big
storm was going to be bigger than he thought. You held her hand
and waited for the rain and thought about how terrible it is that
we remember so much.

There were lines in almost every poem in this book that made me shout out loud.

I really do have the best job in the world for a man like me.  Pharoah is barking out "I Want To Talk About You" on the box, I have a good friend coming over and we are going out to lunch, later today I'm meeting K downtown for an event we are both excited about.  And with any luck at all another book of poetry will come through the mailbox while I'm out to lunch.

Emergency Anthems is THE book I will be recommending to all my friends.  Today's book of poetry believes discerning readers will be doing the same for years.  Alex Green's first book is so much better than I am able to express.

ABOUT THE AUTHOR
Alex Green was born in California and raised in the East Bay. A two-time nominee for the Pushcart Prize in Poetry, his work has appeared in RHINO, The Canary, Mid-American Review, and Barrow Street. He is the author of The Stone Roses (Bloomsbury Academic), currently teaches at St. Mary’s College of California, and is Editor of Stereo Embers Magazine. You can visit him at www.alexgreenbooks.com.

BLURBS
“Alex Green’s work blossoms on the page like small explosions. A surf-side Spoon River tinged with Chandler, Dali, and David Lynch. Neon sunsets, lost girls, grifting tennis instructors, and dazed surfers with bite scars shaped like lightning bolts. And through it all, the dark, swift flash of sharks. Serious and hilarious, Green’s pop culture satire lunges with the same deft surprise as those sharks.”

-- Tom DiCillo, director of When You're Strange and Living in Oblivion

“Green’s short pieces read like secrets, someone sharing a passion, a bias, a humiliation, a love. They crash into your ears like the surf, and you flip the page, awaiting the next beauty, the next set of waves.”

-- Joshua Mohr, author of Some Things That Meant The World To Me

“Alex Green is the uncrowned poet laureate of the last day of Summer and his first book is an absolute stunner—rich with metaphor, confessional honesty, and melancholy narrative. In Green’s sun-battered landscape, it’s always the last day of summer, nothing worked out the way it was supposed to, and the optimistic pop songs in the background play a jangly counterpoint to real life disappointments. In the afterglow, he finds humor, revelation, and that much maligned old measure of poetic meaning: beauty. Green forgoes opaque linguistic ornamentation in favor of coherent narrative, honesty, and lyricism. His gift for sudden and surprising metaphors is unmatched. This is a collection to return to over and over again and one that marks the debut of an important and refreshing poetic voice. Emergency Anthems is incredible, my favorite book of poetry of the last five years. Maybe of any five years.”