The Green of Sunset is what you might get if you made a benevolent Frankenstein out of Hemmingway, Jim Harrison and the very sensible Sharon Olds.  Who knows what Brantingham will think of that when he sees it.  But it is meant in an entirely complimentary way.  This is big boy stuff with attitude, and then when you least expect it Brantingham's heart and voice turn sentimental but never soft.

There is a manly, tough-guy veneer to these poems and Harrison would approve.  And these poems would pass Hem's scrutiny because they are as solid as poems get, as solid as iron, there are no chinks in this armour.  Then there is all that intelligent tenderness and hard earned emotional wisdom.

The Wages of Cynicism

Imagine me, cynic that I was, 19 years old, sneering at a Yu-
goslavian village whose favorite daughters and sons talked
directly to Mary--the gut reaction of a clever kid--who would,
in the next five days, see himself for what he was and learn to hate
that fraud inside himself. It's taken me these last twenty years to
forgive myself for that, and God, so much more, and it makes
me wonder how long it will take for me to forgive myself for all
that I am doing today.

Brantingham isn't afraid to call himself on his own bullshit and that is refreshing.  The Green of Sunset is a palette where Brantingham is mixing colours and digging into the canvas hard, it's a big canvas and he is using all of it.

This is the first time Today's book of poetry has encountered the poetry of John Brantingham even though almost every poem in this collection was previously published.  These poems feel familiar, like you have heard them before, they are like stories passed down at late night fires.

Brantingham's narratives almost always circle back on themselves with new and deeper revelations about who the poet really is and as these coils filled with joy and power and remorse tighten, the palatable tension rises.

The Art of Merging

He's been on the road five hours after taking it from his boss all
day, when a big white truck cuts into his space on the freeway.
He lets it all go at once; the job he didn't want, the miscarriage,
the wife he betrayed, his brother's addictions, everything in one
long sentence of hatred, and the truck takes his sentence and
his sins, and it hauls them away forever like that beautiful goat
wandering the Sinai.
...

Today's book of poetry is using three of Brantingham's shorter poems from The Green of Sunset for today's blog/review - but it could just as easily have been three longer poems.  At this morning's reading the short poems took on a Richard Brautigan flare, Brantingham's longer poems took on the tone of sacred text from a modern voice, a hit on folklore and legend.

On the couch last night, I realized that I was never going to hike
the Pacific Crest Trail--not the whole thing--and I guess I
could add that to my long list of regrets if I had ever wasted time
with that kind of list.
There was a time twenty years ago when I dreamed of tak-
ing the hike from Canada to Mexico in a three-month journey of
silence and self-reflection, swimming into myself and finding the
peace that lay in the middle.
What a pretentious ass I was, and what a fool I was to think
that peace lay some place inside me when it was sitting right here
the whole time on the couch in that space beside you.

Today's book of poetry liked how real and true every word in this collection sounded.  The Green of Sunset has a moral center that these great prose poems revolve around like planets
fighting for the sun.  Brantingham likes the clean message and these poems gleam. 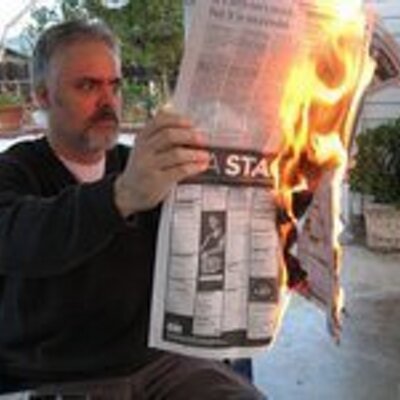 ABOUT THE AUTHOR
John Brantingham is the author of hundreds of poems, stories, and essays published in magazines in the United States and United Kingdom. His books include Mann of War, a crime novel, Let Us All Pray Now to Our Own Strange Gods, a short story collection, The Gift of Form, an instruction guide for beginning formal poetry, and East of Los Angeles, a poetry collection. He teaches English at Mt. San Antonio College in Walnut, California and lives in Seal Beach with his wife Annie and dog, Archie Goodboy.

BLURBS
"It is difficult to praise a book of poems that you already feel so emotionally connected to: it seems unnecessary, a gesture that only takes away from the beauty, wisdom, goodness, honesty, imaginativeness, and spirituality of the work itself. Nevertheless, John Brantingham's The Green of Sunset is the finest collection of poems he has ever written, which is saying something, considering he's been producing excellent work for going on 20 years now. Let the prose poems contained in this collection stand alongside those in Mark Strand's Almost Invisible and Jim Harrison's In Search of Small Gods as some of the most accomplished of the past decade. Simply put, these poems are the work of a writer operating at the very top of his craft."
- Paul Kareem Tayyar

"In an age of superficiality, mediocrity and sound-cliches, John Brantingham is a genuine throwback to when Men of Letters roamed the literary prairies: a scholar, novelist, poet, essayist, scriptwriter, public speaker, reviewer, professor, mentor, and festival organizer. He is first-rate in everything he turns his mind and hand to. His poems benefit from the breadth of his life experiences as well as his formal academic training. His creative and intellectual emanations brim with his enthusiasms, his versatility, and the depths of spirituality and social conscience at the core of his soul. There is no one of whom I could speak more highly, as a write and as a person."
- Gerald Locklin

"Our best writers weigh their words carefully, and John Brantingham is certainly one of them. He is a craftsman with a huge heart who cares deeply about people and stories and the chaos we call our lives. His characters are beautifully rendered, real and true, at once vulnerable and courageous. Wise and insightful, Brantingham's work brilliantly captures the light and darkness in us all."
- James Brown