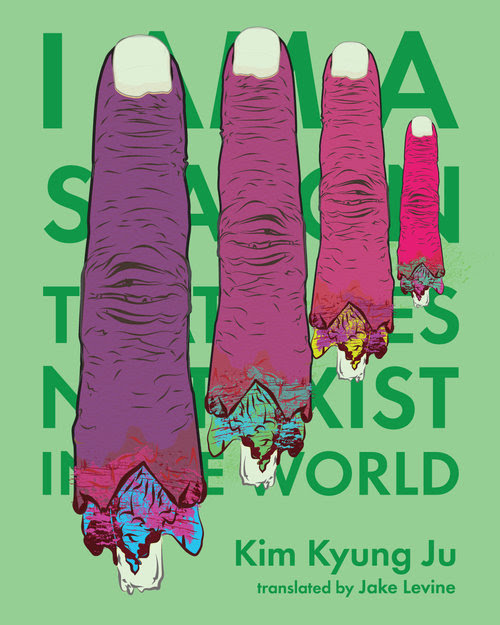 Kim Kyung Ju is ready to jump in to deep water anywhere.  In I Am A Season That Does Not Exist In The World we find ourselves swimming everywhere from between the tears of a doomed mackerel to between the paper sheets with Hegel and Holderlin.  Today's book of poetry was blown away by the sheer kinetic force of Kim Kyung Ju's robust and comprehensive verse.

These poems have a thickness to them, a viscosity, they are more sauce than soup, a big tasty chewy stew.

Bred From The Eyes Of A Wolf

If you come to my universe, it is dangerous--
I caught you stealing my bread.

At best life is walking about in the blood we own.

One winter, while he clenched his teeth on his mother's teet
the wolf's pupils slowly got fat.
Mom, continually in this life, why are we growing thin?
When you were born, I licked you.
In front of the girl I love, I want to take off my pants.
Because of your pubic hair, you can die--that's life...
If it poured snow, I raised my front legs
and nonstop knocked at the door of man
until your father and I shit on the same spot.
To carry you and your sisters here
for thirty years we drooled--meanwhile
to be beside men, dad cut off two of his legs and left.
Mom, my universe groans--it blows.
Every day I am silent. No noise. Not a footstep.
I hover around her window
but you're not allowed to leave blood on her street.
When people look at your blood, the volume of their footsteps turns to low.
So I understand now--when I see the light, I don't rush to it anymore.
Honey, you are not the only beast that wakes
at the sound of clenching teeth.
Darling, when you get older
I want to lose my way with you at my side.

Today's book of poetry is ready to put I Am A Season That Does Not Exist In The World up for best title of a poetry book in recent memory.  And, as it turns out, the title is prophecy, Ju is unlike any other poet we have encountered, he is writing from the strange weather of a fifth season.

Today's book of poetry believes that Jake Levine's translation is crystal, laser, dead-on clear and as a result Ju's Korean explodes in an English that taunts, teases, tickles and terrifies.

I Am A Season That Does Not Exist In The World has sold over 13,000 copies in 13 editions in Korea. I'd like to let that sink in a little.  Today's book of poetry can assure you that of the over 1,500 books we have looked at for this blog none of them come close.  We can say with confidence that 13,000 is a big, big, big number for poetry sales.  From now on TBOP will be keeping a much better eye on Korean poetry.

At the end of every night, the cornershop sells a candle.
At the corner a blind masseuse picks a razor blade.
Watching the weather forecast, the owner eats a can past its expiration date.
But the razor has no expiration date.
Too sharp, each one is dangerous.

Ducks biting dead rats enter the sewer hole.
From the sewer, the weather inside a room flows out like sick eyes.
This neighborhood finally turns around.

In a delivery van's cargo, short women browse through fish.
To see fresher fish, a man
changes the last lamp from his pocket and sees

the shadow of the tree elongating little by little.
Night soon will come.
Somewhere else, a child holding a doll without a neck
stares blankly into the sky
and in that same sky, the man looks into the rain
that contains a strange blue smell. Ah, the man thinks
that child that used to come around here, he will never return.

But where has the doll's face gone?
Maybe that kid is holding a kitchen knife
cutting the smiling doll's neck off?

The man flicks his cigarette into the gutter.
Birds hatching eggs in the kitchen, little by little, peck apart their eggs.

Kim Kyung Ju uses humour and dark wit as balance on his pendulum but these poems are full of heavyweight punches.  No holding back.

Today's book of poetry often feels like we are using confetti to describe constellations and cannot say enough to adequately describe the books we throw at you.  I Am A Season That Does Not Exist In The World is a perfect example of a book where there is more transpiring than I can provide entrance for here.  So think of me, Today's book of poetry, as a Doorman.  Come on in.

The Night The Cat Licks The
Glass Of A Butcher's Window

Spiders crawl inside the ears
of children sleeping on the street.
Stuck to the window of a midnight butcher's shop, a cat
on its hind legs pawing the glass.
Makeup is peeling on the chopped off faces lying in the trash.
Hooks hung on the wall spread open their vaginas
and drop blood on the face of time.
Inside a fluorescent tube filled with water
bugs lay dead eggs.
Not wearing pants, a reclusive shadow
paces to and fro between chunks of flesh.
The cat stiffens its back. Scowls.
A black tongue begins to lick the meat's neck.
Drooling, while licking intestines
under the street lamp, the hunger of the cat is illuminated
and the humiliation, ecstatic, that the tongue is sucking
stuffs the mouth of a girl turning down the street.

Today's book of poetry has found that we often have trouble with translations, between one language and another there is much open space, distance for meaning to get lost.  I Am A Season That Does Not Exist In The World leaves us with many questions, queries, inquiries for the future, more reading to do - but that is a good thing.

Kim Kyung Ju's I Am A Season That Does Not Exist In The World is poetry that will broaden your collection and your mind.  Once you've tasted Ju's new season it will be hard to forget. 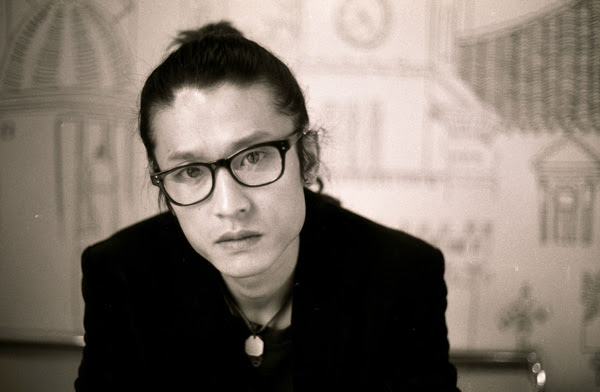 ABOUT THE AUTHOR
Kim Kyung Ju is a Seoul-based poet, dramatist and performance artist. His plays have been produced abroad in several countries and his poetry and essays are widely anthologized in South Korea. He has written and translated over a dozen books of poetry, essays, and plays, and has been the recipient of many prizes and awards, including the Korean government’s Today’s Young Artist Prize and the Kim Su-yong Contemporary Poetry Award. His first book of poetry, I Am A Season That Does Not Exist In This World, sold over thirteen thousand copies and is one of the most popular and critically acclaimed books of poetry to come out in South Korea in the new millennium.

ABOUT THE TRANSLATOR
Jake Levine has been the recipient of numerous grants and awards, including funding from the Korean Translation Institute, a Korean Government scholarship, and a Fulbright scholarship. He writes a series of syndicated articles in the Korean literary magazine Munjang, translating and introducing contemporary American poets to a Korean general audience. He is the author of two poetry chapbooks, edits at Spork Press, holds an M.F.A from the University of Arizona, and is currently getting his PhD in comparative literature at Seoul National University.

Email ThisBlogThis!Share to TwitterShare to FacebookShare to Pinterest
Labels: black ocean, hegel, holderlin, i am a season that does not exist in the world, jake levine, kim kyung ju, korean poetry, michael dennis