Moez Surani does a couple of things in ةيلمع Operación Opération Operation 行 动 Oперация that go entirely against the grain of Today's book of poetry Poetry Belief System.  Today's book of poetry generally disapproves of introductions in books of poetry where the introduction is explaining how or why the poem works.  It is like muddying the water before you can get your feet wet.  But there are always exceptions and ةيلمع Operación Opération Operation 行 动 Oперация is an exceptional exception.  In this particular case the introduction is a necessary part of the whole.

Turns out ةيلمع Operación Opération Operation 行 动 Oперация may also be the mother of all list poems - and you know how we love those here.  Max, our Sr. Editor has taken a dislike to the list poem in his tired dotage but we love him anyway.  This morning we pushed a saucer full of shortbread cookies and another saucer full of scotch under his office door.  With any luck at all that will mollify, read sedate, his ire.

Not to give away the plot but ةيلمع Operación Opération Operation 行 动 Oперация is a found poem constructed from the list of military operations undertaken by member states of the United Nations between 1945 and 2006.  This poem is a haunting indictment that opened Today's book of poetry's eyes.  How dare these military operations have humour, irony, wit and pathos amongst their names.

We owe Moez Surani a great debt for his research and diligence in creating this highly disturbing and menacingly masochistic nihilist literary stream of conscience gem.  Exactly what Mr. Surani intends to say with Operations will be sorted and discussed by higher authorities than Today's book of poetry but we are honoured to look at it here.

ةيلمع Operación Opération Operation 行 动 Oперация is way outside Today's book of poetry's usual bailiwick of narrative, descriptive and casually accessible poetry, way outside. This book is a challenge but that is not an obstacle, it is an incentive. Surani has written the best sort of anti-war, anti-violence tract possible, it hoists these nations by their own petards with clarity and conviction.

This morning's read was a steam-roller that barely paused for breath. ةيلمع Operación Opération Operation 行 动 Oперация is a military fugue where the volume and beat have been pumped up until it makes you catch your breath. Surani has discovered what sweet horror we casually inflict upon the world and has made poetry out of it. 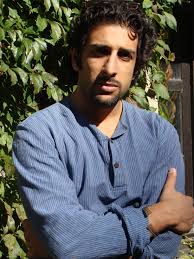 ABOUT THE AUTHOR
Moez Surani has travelled, studied, and worked in countries around the world. His writing has been featured in numerous publications, including the Best Canadian Poetry (2013 and 2014), The Walrus, The Globe and Mail, Harper’s Magazine, and PRISM International. His first poetry collection, Reticent Bodies (Wolsak and Wynn), was published in 2009. In that same year, he won a Chalmers Arts Fellowship, and later, attended artists’ residencies in Italy, Finland, Latvia, Switzerland, Taiwan, and Canada. His second poetry collection, Floating Life (Wolsak and Wynn), was published in 2012. ةيلمع Operación Opération Operation 行动 Oперация, Surani’s third book, was a finalist for 2014 Les Figues Press Book Prize.

BLURBS
“Words, first, then evidently turning into names, but names of what? Racking up four thousand military operations by United Nations member states since 1945, Moez Surani’s list is far from simple. Who knew that the UN was writing a long poem? Or that this particular long poem would resound in the mind like Pound’s Cantos, that ‘poem including history’? A stunning compilation of linguistic fertility—and fertilization— courtesy of a political organization listing in the wind over half a century. But it takes a listener to detect that shiver in the atmosphere, and this astonishing book is deep listening through and through.”
—Jed Rasula, author of Destruction Was My Beatrice: Dada and the Unmaking of the Twentieth                                 Century

“Morning light. June dawns. Moonbeam. Bumblebee. Wren. Tulip. The code names of military operations conducted by the United Nations mark and disguise the costs of war and humanitarian interventions, like modest arrangements of flowers at unseen necropolitical funerals. ةيلمع Operación Opération Operation 行动 Oперация appropriates these code names without deploying the arsenal of juxtaposition, displacement, and framing conceits. It is a stark, stripped down, relentless list poem that organizes and recognizes the many faces and names of historic international cooperation. Surani’s new book reimagines appropriative writing as an “inadvertent collaboration” between nations. It documents the civilian and ecological devastation of collaboration and divests idealism from the notions of “agreement” and “co-production” between imagined and real communities. It is appropriative writing that queries how language is resignified and renovated for artful and affectively profitable cooptation by the state. And, true to the project’s claims, the book eschews the pleasures of euphony, pursuing instead a terrifying cacophony between sound and sense. An unnerving, frightening book that calls for expansive and paratextual reading.”
—Divya Victor, author of Natural Subjects

We here at TBOP are technically deficient and rely on our bashful Milo to fix everything.  We received notice from Google that we were using "cookies"
and that for our readers in Europe there had to be notification of the use of those "cookies.  Please be aware that TBOP may employ the use of some "cookies" (whatever they are) and you should take that into consideration.
Posted by Today's book of poetry at 7:27 AM