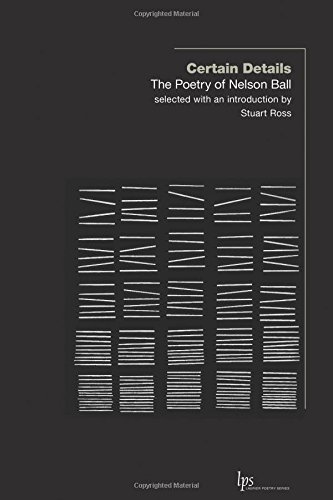 As the delightful Dame Edna might say, "Welcome back puppets."  Today's book of poetry has been on an extended leave and would like to thank each and every one of you for sticking around.

We ventured to Gaspe to the see Jardins de Metis http://www.refordgardens.com/english/ and once again we were amazed and delighted.  Spent a few nights sitting on the porch of our motel watching a seal frolic while we sipped beer and watched the sun set over the water.

Today's book of poetry started getting packages from our Southern Correspondent, the Twangster, a few months ago.  Since then there has been a beautiful barrage of David Lee, Dave Etter, Rodney Jones and others.  Today's book of poetry has been on leave but we've been reading.  Mr. Clewell has enriched the archives here and we just wanted to tip our hat in his crazy direction.

Today's book of poetry doubts that he is alone when he wishes he wrote like Nelson Ball.  Ball is some kind of Canadian Zen Nature poet -- who doesn't stop at nature.  Everything under the sun may be considered but what we get is some crazy (in the very best way) condensed vision that whispers instead of shouts.

When Nelson Ball whispers every poet in Canada leans in to listen because no one does it better.

a sheet of notes
easily brushed off

II (with boots on)

Certain Details, The Poetry of Nelson Ball was selected and is introduced by Stuart Ross.  Any regular reader of this blog will be familiar with his name.  Stuart selected, edited and introduced my most recent book, Bad Engine (Anvil Press, 2017) http://michaeldennispoet.blogspot.ca/2017/06/bad-engine-michael-dennis-anvil-press.html

Mr. Ross has an excellent skill set when it comes to showing poets in their best light.  Certain Details looks at work from eight previous Nelson Ball collections as well as a generous sampling of previously uncollected poems.

Nelson Ball isn't what I would call a minimalist but he's awfully careful with his word dispersal, selective to say the least.  It compels the reader to lean in closer and listen harder.

became famous, really famous.  Yes, he was
a good man.  There have been

many good men, some recorded in history,
most, probably not.  The real story

is that Jesus Christ had friends
who were writers.

Certain Details closes with a rare look inside Nelson Ball's world with a candid and humble essay Afterword: Me and My Poetry: An Autobiographical Essay.  And it is worth the price of admission alone.

Today's book of poetry has taken you readers into Nelson Ball territory more than any other poet and it is not hard for me to see why.  Others see it too.  At this morning's office read the entire staff were back from their various adventures and it made for a festive atmosphere.  Then Milo and Kathryn really got the party started when they said it best.  Milo stepped up in front of the room, rolled up his left sleeve and there, just above his wrist, in tiny lower case letters, "ball".  Before any of us could think or comment Kathryn stood up beside him, rolled up her right sleeve and there, in the appropriate spot was "nelson."

The poem's point of attention, like
the tree's centre of gravity

is held back in rhetoric--
thick bush--if the

The Laurier Poetry Series has enhanced their legacy with the inclusion of Certain Details, The Poetry of Nelson Ball to their canon.

Today's book of poetry applauds these excellent poems as well as the future poetry of Nelson Ball, a quiet but true national treasure.

ABOUT THE AUTHOR
Nelson Ball, poet and bookseller, lives in Paris, Ontario. He has worked as a labourer, chauffeur, office clerk, forest ranger, record store clerk, and janitor. From 1965 to 1973 he ran Weed/Flower Press. The author of over thirty books and chapbooks, he is featured in Catherine Stevenson’s video “Nelson Ball & Barbara Caruso | Home Project | A Photo Documentary.”

ABOUT STUART ROSS
Stuart Ross is a writer, editor, and writing instructor. His recent books include A Sparrow Came Down Resplendent (2016), A Hamburger in a Gallery (2015), and Further Confessions of a Small Press Racketeer (2015). He has maintained a micropress, Proper Tales, since 1979, and has his own imprint at Anvil Press. He lives in Cobourg, Ontario.