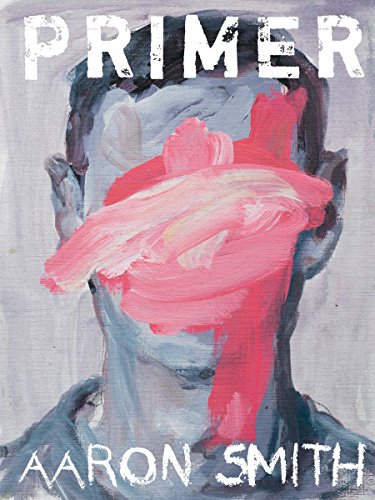 Today's book of poetry is going to start today's blog with a message directly to Aaron Smith.  NO "Blue Exits" please.  There aren't enough excellent poets with your particular mix of bawdy guilt and formidable chutzpah.

It might be hard to imagine that a totally straight sixty-year-old finds common ground with an entirely randy and frequently angry younger gay poet.  But Smith's ribald renunciations of the status quo in Primer come from a deep well of lucid and loquacious lust.  Smith kicks the shit out of Eros.

Notes For A Lecture:  Keith Haring

so thick on the page I could
tear off my underwear.

When I was a kid, I hated the word
"pleasure." It made me feel like

my parents knew my penis got stiff
in the tub, that the washcloth

felt good on the tip. Imagine our veins:
graffitied tunnels desire moves through,

brakeless, rumbling into thrust.
Just relax, the man said, as he opened

my legs, fingers slick with his own wet.
His tongue in my ass unlocked

a place in my chest I was afraid of.
A friend told me he thought the great revelation

of his life would be a phrase from Keats
or Yeats, not a married man at his throat.

I want to fuck you boy-pussy.
He said he never felt closer to god.

self-loathing finally brought me to.
I'm so glad to have a body I hated.

Primer is boldly, beautifully frank about the journey to manhood for a young man uncertain of his sexuality, and if not uncertain, terrified.  It doesn't take Smith that long to find certainty but he never quite finds peace.

These poems despair a sexuality some still see as "other" but Today's book of poetry thinks that for all his justified anger and rage Aaron Smith has created a hopeful text in Primer for those about to follow.  And an entirely entertaining book of poetry for the rest of us in the process.

Dad said someone shot
the albino deer, with

a gun, out of season. Eyes
pink, white fur, a reverse

shadow in dusk against
the hillside. Not in all

the years I've hunted
have I seen an animal

like that. It's cruel, he says,
for nature to make

such a thing, unable
to hide when hiding

is how it survives. He looks
through my eyes, then

away, he wants us to stay
ordinary men.

Primer throbs with visceral lust and desire.  Gay men will identify these poems, recognize themselves, their friends, their stories.  But every reader will be able to identify with the human need for love and acceptance, contact.  And it is not just the acceptance of other but the real struggle to accept oneself as we really are.

Aaron Smith's Primer swings carnal but addresses those big questions of who we are and who we see when we look in the mirror.

I want to tell the woman
selling self-published christian
fiction at Starbucks, who says,
god has made her a fisher of men
that I didn't think I could come
standing up until a man
I fucked stuck three
fingers in my butt. I want
to tell her that if the asshole
is the crucifixion then
the prostate is the second
coming. Once I thought
it was possible to be an ethical
person until the guy I was dating
said Jennifer Lawrence is our
greatest living actress. He wept
during sex and left his socks on
in bed. I could live with the cold
feet and the crying.

Bravo Aaron Smith.  For Today's book of poetry Primer comes across as so damned honest and true that you feel the heat of Smith's fire.  Any poetry lover will recognize the battle with despair and celebrate beating it back into the darkness.

ABOUT THE AUTHOR
Aaron Smith is the author of Appetite, and Blue on Blue Ground, winner of the Agnes Lynch Starrett Poetry Prize, as well as the chapbooks, Men in Groups and What's Required. His work has appeared in a number of literary magazines, including Ploughshares and Prairie Schooner, and The Best American Poetry 2013. He is associate professor of creative writing at Lesley University in Cambridge, Massachusetts.

BLURBS
“Aaron Smith’s poems have always exuded a blue that’s simultaneously melancholy and bawdy. Primer sharpens his seemingly paradoxical blend of vigor and vulnerability. These marvelous poems are confrontational not simply for readers, but for the poet/self kissing the window between light and darkness, splendor and despair. Smith writes with more provocativeness and compassion than any poet of his generation.”
—Terrance Hayes

“Shame is the crux, in Smith’s austere poems; an aching, inescapable force that closes the gay boy into his own body, making sex abject, until ‘there’s not enough city//to fill you up.’ The world may have changed, but we can’t help but carry into the new life the ineradicable weight of the past.”
—Mark Doty